Skip to primary content
Skip to secondary content
Following up on my previous post on nineteenth-century textile mills, as seen in Nancy Zaroulis’s book, Call the Darkness Light, here’s more on the conditions in which the Yankee “mill girls” worked. Even at their best, at the beginning of the “Lowell Experiment,” those conditions were brutal by today’s standards. The women signed up for a year’s term and worked a standard 12-hour day, with each mill girl, or operative, required to work two “frames” or looms. Hundreds of power looms worked on each floor of the enormous mills.  As Zaroulis describes it, “They were, it seemed, in the presence of a row of insatiable monsters, devouring the endless supply of fluffy gray-white stuff fed into them.”

The 1800 @Lowell #textilemills were kept hot and humid to prevent the thread from breaking and to minimize the threat of explosion from cotton dust. Windows were nailed shut, even in the summer, to maintain these conditions, a primitive form of environmental control.  The workers breathed in lint and smoke from the oil lamps all day and they were deafened by the noise.
“Instantly they were caught up in a Hellish noise so great, so overpowering, that human speech was impossible. Here they heard only the shrieking, pounding, thudding, clattering voices of the machines, and they were struck dumb by the cacophony, the maddening, mind-shattering din.” And they endured this for 12 hours a day, six days a week—with no headphones for protection. 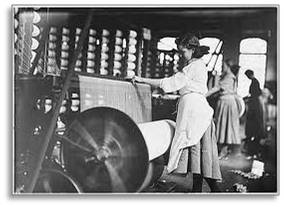 The machinery moved fast and relentlessly. Brass-tipped shuttles flew back and forth at great speed.  There were no safety guards, and no nurse on duty. No one could have dreamed of OSHA.

Women wore long dresses, long sleeves, and long hair, yet to be careless was to court disaster. Catching a sleeve in the machinery meant losing a hand or an arm. A strand of hair, fallen out of its bun in the humidity and into the machinery could cost a woman her scalp. The women worked very carefully, holding their bodies well away from the moving parts as they reached in to fix a problem.

In February Hill, her novel of the textile mills in Fall River, Massachusetts, Victoria Lincoln described parents dosing their children with laudanum at bedtime so that they would sleep through the night. As horrified as we might be by the thought of giving small children daily narcotics, (the Victorians had no such qualms) we have to consider what their lives would become if a parent, sleep deprived and clumsy, lost and arm and became disabled. Were he fortunate enough to survive the injury, he would be thrown out of his job and his family would lose their mill housing. Company management would take no responsibility for his accident or the family’s wellbeing and the government had no programs to keep them from freezing or starving to death.

Conditions grew worse over time. Management dictated that each worker, or operative, would be responsible for three frames instead of two. When the river ran low in August, the mills were closed and no one was paid. When they reopened, wages were cut and then cut again. A premium system was imposed, in which the overseer received a bonus for each worker who produced ten yards of fabric a week more than before. The workers were ordered to maintain five looms, then ten. It was no longer possible to be careful as the women ran from one machine to another in a mad race to stay ahead, to keep the thread from breaking, and to make sure the bobbins filled smoothly. Pay decreased as the danger rose. 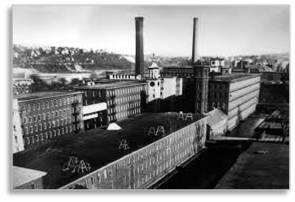 Exhausted operatives petitioned to shrink the work day to 10 hours and were labeled troublemakers. For an unmarried woman, however, the danger did not come from being discharged and losing one’s living.  The real danger was that, “men would shun them, that no man would ask a trouble-maker—even one who worked in a good cause—to be his wife.  That fate—spinsterhood—was too high a price to pay for even Ten Hours.”  The irony is that these women were already spinsters in the word’s literal meaning, spinning thread every single day.

Finally the Yankee mill girls gave up and left. Wages were higher working as shop girls in the stores of Boston and as servants in the new homes rising on filled land in the @BostonBackBay, where they could make as much as $3 a week. Some preferred even the brothels of Boston and New York to the “dignified work” of the textile mills. They were replaced by the Irish who, fleeing starvation, sought only to earn enough money to eat and who did not quibble at working conditions as long as they had a job.   The mill owners never imagined that their loyal operatives would revolt. But, then, “They had not anticipated even their own greed, which would seduce them to drive their operatives to the point of death in order to maintain the companies’ profits.”Call the Darkness Light opens a fascinating window into a world not so far in the past or so distant in miles from where I sit now. The Lowell Experiment kindled sparks for women’s rights and workmen’s rights.  The proprietors could never have imagined that, either.