“Ernestine: A gracious hello. Here at the Phone Company, we handle eighty-four billion calls a year. Serving everyone from presidents and kings to the scum of the earth. So, we realize that, every so often, you can’t get an operator, or for no apparent reason your phone goes out of order, or perhaps you get charged for a call you didn’t make. We don’t care!

Watch this… [ she hits buttons maniacally ] We just lost Peoria.

You see, this phone system consists of a multibillion-dollar matrix of space age technology that is so sophisticated — [ she hits buttons with her elbows ] even we can’t handle it. But that’s your problem, isn’t it? So, the next time you complain about your phone service, why don’t you try using two Dixie cups with a string? We don’t care. We don’t have to. We’re the Phone Company.” 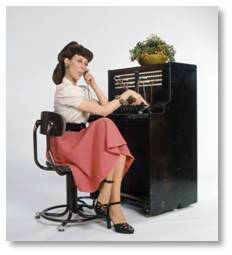 I don’t mean to pick on the airlines. Really. Granted, I have criticized them for peak scheduling, outrageous fees for things that used to be free, cramped seats, dirty cabins, lack of food, delayed flights, surly employees, and requiring that customers do for free the work that airline employees once performed. It simply astonishes me that any industry would so willfully and intentionally alienate the customers on which it depends—over and over and over again.

Ernestine the operator said said it best on Saturday Night Live many years ago: “We don’t care. We don’t have to.” When any industry has a monopoly on a commodity the public depends on, it invites abuse.

In case you thought the airlines had gone as far as they could go in creating the unfriendly skies, though, think again. According to The Wall Street Journal, airlines are about to roll out “Do-it-yourself Bag Handling:” Passengers will now print out their own baggage tags and place them on the bags themselves. Also in the works are “permanent bag tags that automatically update if flight plans change.” OK, this one sounds like it might work. Despite my arguments against doing “shadow work” for free, I can recognize when technology delivers improvements. Self-service kiosks are faster than waiting in a big line for too-few overworked counter agents to issue your boarding passes and take your bags. They are no more intrusive than ATMs and getting to the security checkpoint is now faster and smoother than it used to be. 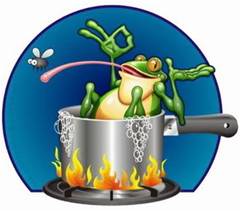 Printing my own baggage tags and sticking them on the bags does not seem like a big deal. (Of course, that’s what the frog said when it was sitting in the pot of water.) I would be even happier to do it if it meant that my participation in the process would improve service or lower fares. (As if!)  @WSJ tells us this new process is “facing opposition from unions, security rules, and fliers who prefer a human touch.” That’s not surprising but opposition means little to the airlines.

DIY bag handling will probably mean fewer that airline employees employees will be around to provide that human touch. The airlines deny this,of course, saying that the new technology will “free workers to handle customer problems.” (I hear Ernestine’s snorting laugh as I type this.) And we’re supposed to ignore the 13.5% decline in the number of ticket agents that resulted from rolling out those ticketing kiosks. For the airlines, “the human touch” means sitting in their shrunken seats next to a sweaty, overweight man on a full flight that’s been sitting on the runway for two hours.

When the Carter administration deregulated the airlines in 1978, the goal was to promote competition and thus provide better service at lower fares. What could go wrong? Well, everything, it seems. The Concise Encyclopedia of Economics tells us that,

“Under CAB Regulation, investment and operating decisions were highly constrained. CAB rules limiting routes and entry and controlling prices meant that airlines were limited to competing only on food, cabin crew quality, and frequency. As a result, both prices and frequency were high, and load factors—the percentage of the seats that were filled—were low. Indeed, in the early 1970s load factors were only about 50 percent.” That is clearly inefficient and we can see what drove the deregulation initiative. Theoretically and logically it should have worked.”

What really happened, though, is that the airlines went on an M&A binge, merging with one another until fewer and fewer companies were left to compete. The Concise Encyclopedia of Economics has a very rosy view of the results:

“The air transport market today is remarkably different. Because airlines compete on price, fares are much lower. Many more people fly, allowing high frequency today also, but with much higher load factors—74 percent in 2003, for example.
Even the partial freeing of the air travel sector has had overwhelmingly positive results. Air travel has dramatically increased and prices have fallen. After deregulation, airlines reconfigured their routes and equipment, making possible improvements in capacity utilization. These efficiency effects democratized air travel, making it more accessible to the general public.” 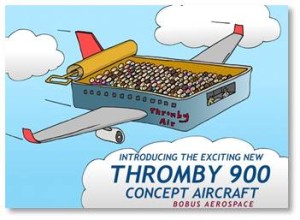 If you consider flying in a packed sardine can with little leg room, dirty tray tables, and no food while being delayed for hours and missing the connecting flight you have to take because the hub system wiped out most non-stop flights as “overwhelmingly positive” you agree with them.

Those conditions do explain, however, why the airlines are currently being investigated for collusion by the U.S. Justice Department. In the meantime, prepare to become your own baggage handler and download the smart-phone apps for whichever airlines you fly. The unfriendly skies are about to drop more work on you and tracking your bags will become your responsibility.

For another @nbcsnl view, this time of today’s deregulated flying experience, check out this skit on what it’s like to fly with Total Bastard Airlines.