Back in the summer of 2013 I wrote a post on “Four Ways to Launch an Efficiency Backlash” that noted:

“Self-checkout forces the customer to do the work employees used to do before they got laid off. Worse, we don’t even get a discount for ringing up our own items, so the company saves money but we don’t. Essentially, the customer provides free labor.” 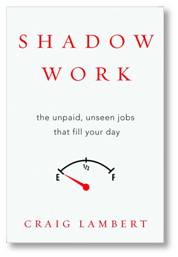 Now Craig Lambert, former writer and editor at Harvard Magazine, has written a book on this subject called, “Shadow Work: The Unpaid, Unseen Jobs that Fill Your Day.”

As reported in the Boston Globe, Mr. Lambert had his own epiphany one day when he watched a woman who was a senior partner in a Boston law firm scanning and bagging her own groceries. The lightbulb went off as he realized that “this woman was doing the work that had previously been done by a grocery store worker.”

Bingo. Except that it would have been two workers: one to check out and one to fill the bags.

Three Reasons We Do Shadow Work

Why was the lawyer doing this? For the same two reasons that most people do it:

The first is artificially created and the second is successful marketing. Both rely on American pride in self reliance and our “can-do” mentality to get customers to perform the company’s work free of charge. Score: Company–100, Customer–0.

I can just imagine the conversation that went on among a corporation’s senior executives when self checkout was first proposed.

CEO: We have to do something to lower our costs and increase profits. Ideas, anyone?

CFO:  We can do both if we lay off at least half our checkout employees and replace them with machines.

VP of Customer Service: But that will ruin the customer’s in-store experience. They don’t want to do the work themselves. They may just walk out and never come back.

VP of Customer Service: (Shaking his head) No, no. It may work once but after that they’ll go to the competition.

CMO: How do you know that, Frank?

CFO: I played golf with him at Shadow Brook on Saturday.

CEO: Let’s do it! Once profits are back up, we can raise our salaries and give ourselves big bonuses for improving efficiency so much. 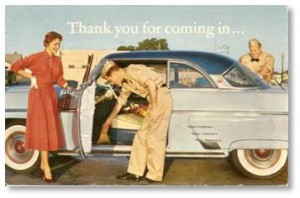 And thus did customers become unpaid employees of stores and corporations. Thus did we agree, like sheep, to do the jobs that paid workers with benefits used to do.

That’s how we  accepted that it’s OK to fire dedicated and valuable employees and replace them with the customers they used to serve. And that’s how we stopped thinking and accepted what we were told was best for us.

And that’s just a few. I’m sure that Mr. Lambert has found many more. I deal with the second item on this list in my follow up post, “Efficiency Backlash 2: Pumping Gas.”

In my 2013 post, I listed four rules for conducting my own efficiency backlash:

What’s the Impact of Shadow Work?

I have to wonder what the impact of our doing all this shadow work might be. It takes time and effort, of course, and forces us to learn new skills. It makes us struggle with online forms and permissions as well as pesky telephone service menus. 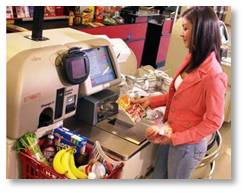 It sometimes inconveniences us, as with standing in the cold and rain to fill the tank instead of staying warm and dry while an employee pumps the gas. Craig Lambert adds that shadow work also removes a level of human interaction and personal conversation as we manipulate machines instead. Self checkout is never going to say, “Good morning, Ms. Kaplan. How are you today? Did you find everything you need?”

There’s a Word for That

I said we have become unpaid employees but, actually, an employee receives wages for the work he or she performs. There is a word for people who work for nothing, who provide labor without compensation. That word is slave.  When we do the work and corporate executives laugh all the way to the bank, there’s a word for that, too: gullible.