Does anyone out there believe Tina Fey, Gwen Stefani or Sarah Jessica Parker get hair color out of a box sold in the drugstore and color it themselves…at home…because they’re worth it?

Did you buy a Honda this Christmas after you saw Michael Bolton standing next to one and singing? Seriously–who thought up that one? Did a group of Honda executives look at a rough cut of that video, high five each other and say “nailed it?” Apparently they did.

“Michael Bolton’s universal appeal and charisma will catapult our holiday campaign beyond the usual automotive sales-event advertising,” said Susie Rossick, senior manager at American Honda Motor Co. Seriously, she said that. For six weeks they treated us to Michael Bolton singing in assorted Honda commercials with that in mind.

Last week I saw Diane Keaton presenting an award on live television. Diane is 68 and stunning. It was obvious she decided to forego surgical and injectable options in favor of aging with grace. She looked beautiful and real. Just when I’m thinking there’s no shame in her game she appeared in L’Oreal’s commercial for an anti-aging cream, air-brushed and photo shopped into a 30 year old. You let me down Diane.

“I know half the money I spend on advertising is wasted, but I can never find out which half.” 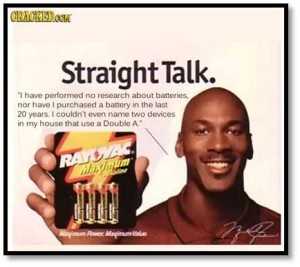 U.S. companies invest over 70 billion dollars in the television ad market because they believe it works. Companies expect advertising to produce returns, just like any other investment.

Crafting a compelling message is not easy when you have to reach a smart but time challenged audience. Enter celebrity endorsements. Having a famous person hawk your products isn’t always the best way to go but that doesn’t stop companies from trying. When it comes to celebrity endorsements there are A-listers and B-listers doing their best to make you believe and buy.

A-list stars typically don’t hawk products in the U.S. They worry that the US ad market will cheapen their image but have no problem putting their names and faces behind products in foreign countries. Leonardo DiCaprio endorses Jim Beam in Japan while George Clooney uses a Nespresso machine in Europe. 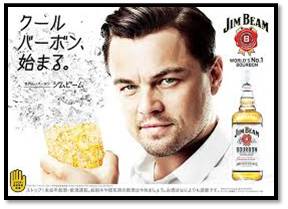 Chanel took a risk and chose Brad Pitt as the spokesperson for its flagship Chanel No. 5 perfume, traditionally the realm of A-list women. A very savvy move. Brad is one of the hottest actors walking the red carpet and who better to attract a woman to a perfume? When I see this commercial the fantasy part of my brain tells me to buy it and douse myself with it.

And then there’s the B-list. Asking B-list celebrities to endorse products might make sense in theory, but in practice things generally don’t go as planned. The issues tend to be contractual. Jessica Simpson partnered with an apparel manufacturer to create a clothing line that included inexpensive jeans, then refused to wear them, stating that she liked another brand better. That didn’t go over well and along came a law suit. She lost.

Some celebrity endorsements make smart advertising sense. They incorporate a product we can relate to and offer a recognized entertainment factor. Let’s take Pistachios. Recent spokespeople for the “Let’s Get Cracking” campaign have included the honey badger, Psy, the “Gangnam Style” singer and Linus and Lucy. This year’s Super Bowl will have one of my personal favorites, Stephen Colbert, speaking on behalf of the little green nuts. I’m already looking forward to it.

If They Sell It, Will We Buy?

They can, and we do. Consumers are influenced by repetition and celebrity. Advertisers know that and use it to counter the fact that they have minimal control over how audiences receive their message. Ads that resonant in one demographic as relevant and credible will fall flat in another. Consumers are fickle and not easily fooled, yet advertisers continue to create ads that lack the influencing credibility needed to make them work, all the while hoping they will.

Here are two examples using the same celebrity – Kelly Ripa. I have no problem believing Kelly eats Nutella. I ate Nutella before it was cool and only available in Europe. It’s good stuff. But Kelly also endorses high-end Electrolux appliances. The ads show her using them. That doesn’t work for me. People like Kelly have people. I’m pretty sure someone else does her laundry and cooks on that stove. Neither of these ads influenced me; however one is credible while the other is not.

Some advertisements are brilliant. The new Old Spice ad campaign (28 million views on You Tube), the E-Trade baby, and Oreo cookies all resonate as good ad campaigns because they are well executed commercials–without celebrity influence–that make us experience a range of emotion in a matter of seconds. A good ad is an art form all its own when it entertains us while attempting to influence us.

Some ads are just plain laugh-out-loud funny and that’s why we remember them. One of my all-time favorites used regular people (always funnier than celebs) and a fabulous play on words. Kmart created an ad campaign for its web site free-shipping option with a cast reflecting a broad race, gender and age demographic in a scenario anyone can relate to. For your viewing and laughing pleasure here is Kmart’s ‘Ship My Pants’ Commercial. Genius.