Once again two articles in The Wall Street Journal have come together in a way that doesn’t seem intuitive at first glance. First there’s “Cool Culottes: They’re Back and Can Actually Be Flattering” by Cheryl Lu-Lien Tan. Then, in the center spread of the Personal Journal section we find “The Bracket of Brackets,” the inevitable tracking mechanism for college basketball’s March Madness season, currently in process. 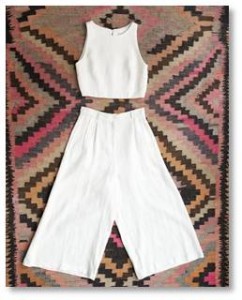 Culottes with structure: Rebecca Greenfield for The Wall Street Journal

Ms. Lu-Lien Tan describes culottes as a style that, “. . .  typically features a voluminous leg that billows out from a cinched waist and ends anywhere from an inch below the knee to 2 inches above the ankle.” Now take a look at the uniforms worn by college and NBA basketball players. Notice any similarities?

Back in the sixties, basketball players wore uniforms with shorts—pants that were, well, short. The silken uniform pants looked even smaller because of the length of muscular leg extending beneath them.  Granted, B-ball players were also shorter at the time. The average height of a basketball player in 1960 is listed as six feet, five inches but I’m pretty sure the median was lower than that. Back then, players didn’t dunk on a regular basis and no one grandstanded by grabbing the rim and hanging in midair. The official average for today’s college players is six feet, four inches with a standard deviation of four inches. But, again, the median is probably higher than that.

The New York Times tells us that Kentucky’s Wildcats are not only the best team in Division 1, they are also the tallest and that’s the way Coach John Calipari likes it. His goal is a team that’s six feet, nine inches across the board.And this is college, not the NBA.

Over the years, as players have grown taller, basketball shorts have turned into what can only be described as culottes that reach the knee. Given the expanse of leg involved, I can understand why the guys feel a tad sensitive about exposing all that skin. They appear to be so concerned, in fact, that many of them have added what appear to be long johns underneath their uniforms. Long sleeves reaching all the way to the wrist cover their arms and leggings to the ankle stick out of their culottes.

I can think of four reasons for a college or NBA player to increase the amount of coverage:

At this rate, the players will be in something that resembles speed skating unitards in five years. 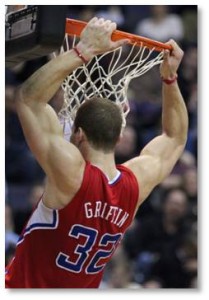 One of the reasons I’m not a basketball fan is precisely the increasing height of the players. Games in the sixties seemed to be more exciting and competitive because they were more challenging. Players couldn’t dunk or hang off the basket because they weren’t tall enough. And a swish was the sound the ball made going through the net, not the sound of silky culottes floating in the wind as players run down court.

If the basket were raised higher than ten feet, so high that today’s players could not stuff the ball either, I think it would improve the level of play significantly. I’d love to see just how good those seven-foot-plus giants really are when they actually have to shoot the ball from under the basket.

In @WSJ @CherylTan88 advises women to avoid culottes made of materials that are “too stretchy or clingy” because it sticks to you in a weird way when you move. She says, “Once they get too soft and loose, they lose their cool and become more like loungy pieces or a strange kind of activewear.”

That pretty much describes today’s basketball uniforms—a strange kind of activewear indeed. And that doesn’t include the long johns.

NOTE: Basketball fans with more information on median heights then vs. now or why players wear leggings, please comment. I’d love to know.