The story of three envelopes is a business classic for dysfunctional organizations. There are multiple versions of the story but the lesson is always the same. 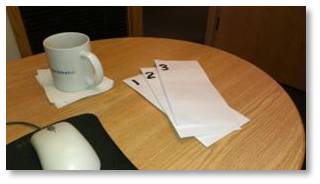 A new CEO had just been hired in a large corporation. The current CEO was “stepping down to pursue other interests” and met with the new CEO in his office, where he handed him three numbered envelopes.“Open these if you run up against a problem you don’t think you can solve,” the first CEO said.Things went along smoothly for the first six month, then sales took a downturn and the new CEO began catching a lot of heat. He went to his drawer and took out the first envelope. The message read, “Blame your predecessor.”He called a company meeting and tactfully laid the blame at the feet of the previous CEO. Sales began to pick up and soon the problem was behind him.Less than a year later, the company was experiencing another decline in sales, combined with serious product malfunctions. The CEO opened the second envelope. The message read, “Reorganize.” This he did, and the company quickly rebounded.After several profitable quarters, the company once again took a downward turn. The CEO went to his office, closed the door and opened the third envelope.The message said, “Prepare three envelopes.”As anecdotal as this sounds, it’s pretty common business practice. The story is intended to be humorous and illustrate…what? That leaders who have forgotten what leadership means have a set of Get Out of Jail Free envelopes? It’s a sad testimony to the fact that good leaders with good business integrity are rare. The three envelopes have become an accepted formula for companies to remain in a continuous state of disorganization.

What’s in the Envelopes?

Envelope #1: Don’t Blame Anyone – You Own It.Never blame anyone else. Own it, fix it, learn from it and move on. This takes courage and humility. If you are in a leadership position, treat it with respect and honor the obligations that come with it. Business leaders have three envelopes available them each day. Every one of them will make a mistake (or two or three) at some point in their careers. The choice between accountability and the easy way out – casting blame, reorganizing or restructuring – can be a difficult one. A good leader will always choose the right path, even if owning it means stepping down.Envelope #2: The More Things Change, The More They Stay the Same

Reorganization can sometimes be another word for blowing smoke. It consumes more energy and resources than it returns in benefits. It’s not a solution; it’s a deck chair re-arrangement on the Titanic. If you are sinking, it won’t make a difference. Employees (especially the good ones) leave a sinking ship. What remains is not what is needed to fix the company. If you have hired your friends and copied strategies from another company you lack originality and vision. You are less like a leader and more like a copycat. The goal of reorganizing is to increase the overall market value of the business enterprise. You can’t do that by copying someone else’s homework.

Reorganization may look good on paper but people will continue to behave as they always have. What you are aiming for is to change the behavior of the company and the way roles and responsibilities are carried out. Employees need to understand what you are fixing. Strong leadership is required to transform a company, along with the business acumen to make the changes work. Senior leaders often do not have the skills, the patience, or the process knowledge required to change the way people think and act.To be fair, sometimes restructuring is necessary. The goal of restructuring is to increase the overall market value of the business enterprise. That’s pretty straightforward. Successful companies follow some basic best practices when contemplating a reorganization or restructure. They start by examining the values of these actions:

1. To address poor financial performance.2. To support a new corporate strategy, or to take advantage of a business opportunity.3. To correct a large error in how the company is valued in the capital market.

He goes on to state that one can no longer think of restructuring as a rare event that happens to “someone else.” Restructuring is a daily event. Within three years of graduating, every single MBA student will encounter a restructuring in his or her job. This is not a confidence-building statement for employees or investors.Constant change, especially when it masquerades as transformation, can erode the vision and disillusion those you are counting on for implementation and success. Your best assets are still your employees. Never lose sight of what makes people get up and want to come into work.Envelope #3: Don’t Let The Door Hit You on Your Way OutIf you are tempted to reach for an envelope – don’t. If you act on the first two, your failure, and possibly your company’s, will stem from these actions. In all likelihood you have engineered your own demise. You have failed to recognize that character-based leadership comes from who you are, not your power or position.I began my career at Digital Equipment Corporation. Founder and CEO Ken Olsen’s mantra was “Do The Right Thing.” Former DEC employee Stewart Stuchbury wrote: “Doing the right thing doesn’t mean doing anything you may want us to do, nor does it mean always saying yes. Doing the right thing is a mindset, it means considering issues from more than a single dimension, taking a path that might not be immediately obvious, not being afraid to admit a mistake and rectify it, saying no and–above all–doing and being the best we can.” This simple invocation stands the test of time, as it speaks to both the rise and the fall of Digital.The challenge today’s leaders face is the ability to know what is right and to act on it. This assumes there is a leader who has a conscience, along with healthy doses of humility and introspection. The best definition of leadership conscience I’ve read comes from Oswald Chambers. “My conscience attaches itself to the highest I know and then it tells me what the highest I know demands that I do. When I listen to the highest I know I’m the best person I can be. When I act on the highest I know my best character makes a positive difference. When I am the highest I know my character, my who-I-am, inspires others to act according to the highest they know. And I become a leader.”When doing the right thing becomes the right thing to do, there is no need for envelopes.