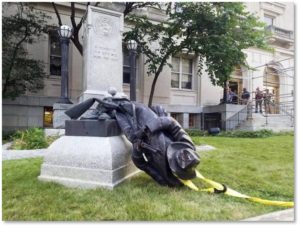 One of the issues raised by the recent—and appalling—neo-Nazi demonstration in Charlottesville, Virginia, is whether taking down Confederate statues of generals and soldiers constitutes erasing history.

Some folks contend that we need to keep these Confederate statues so as to remember the Civil War and the part these men played in it. They claim that removing the statues violates that history.

I disagree completely for three reasons.

First, the part these men played in American history was to execute a dedicated and violent attempt to destroy the Union so they could maintain an economy and lifestyle that was based on slavery. That constitutes high treason.

Yes, I know that Southerners prefer to the Civil War the War of Northern Aggression but that is just putting lipstick on a pig. Confederate Alexander H. Stephens said in his “cornerstone speech” of 1861 that:

“Our new government is founded upon . . . the great truth that the negro is not equal to the white man; that slavery subordination to the superior race is his natural and normal condition.”

That seems pretty clear to me. Also, Article IV, Section 3, Clause 3 of Confederate States Constitution, protected slavery in all territories that the Confederacy might conquer or acquire in the future.

Second, leaving the statues up constitutes revisionist history. The monuments glorify these men both generally and specifically. A society raises memorials to men of whom it is proud, not men who perpetrated horrific acts and who tried to destroy their own country. Remember, at the time the Civil War began, the United States had been a nation for only 88 years.

C. Calhoun and many other slave owners who have been honored with statues for their other achievements. I don’t defend their ownership of human beings but they were not engaged in open, armed rebellion against the Union. There’s a difference.) 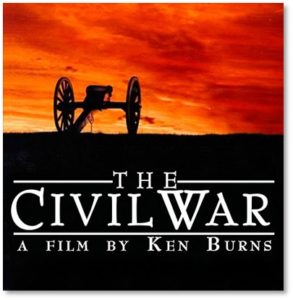 Third, we can remember the Civil War without Confederate statues dominating the very people these men sought to keep in chains. We have books, maps, movies, an amazing film and TV series, and a plethora of documents that detail the history of our great national conflict.

We don’t need huge bronze and stone statues of the men who led their side to an ignominious defeat that left the South impoverished and in ashes for nearly 15 years. This is not a history of which to be proud, regardless of the romantic aura that the Jim Crow South succeeded in creating.

Sometimes it helps to see things from the outside. We spent several days in Germany this year on our Viking River Cruise and saw several ways they address their sordid Nazi history differently.

Germany has no statues of the Nazi (National Socialist Workers Party) leaders who led their entire country to defeat and devastation. We walked through small towns like Wertheim and big cities like Nuremberg and saw no “heroes of the lost cause” standing large and in bronze.

We drove through the enormous, and crumbling, stadium Hitler was building in Nuremberg, past the huge SS barracks, and alongside the parade ground. There were no monuments, no statues, no flags, no rolls of the dead.  We saw pictures of cities that Allied air strikes had bombed into rubble. I read signs that depicted how a cathedral was reconstructed from the few walls left standing. Having to rebuild entire cities constitutes monument enough for them. 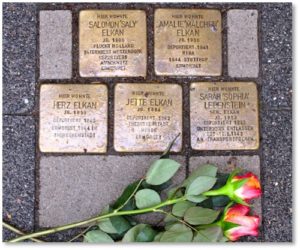 In several cities, we came upon the Stumble Stones (stolpersteine), that memorialize those people who were murdered or suffered persecution by the Nazis.

These square concrete cubes are being placed at the doorsteps of the last residence or workplace people inhabited before they fell victim to Nazi terror. Each cube is covered with a brass plate bearing their names and life dates of individuals. German artist Gunter Demnig began the Stolpersteine Project in 1992 and it is ongoing.

He Who Shall Not Be Named

Germans don’t mention their names. Our tour guides never used Hitler’s name. They called him things like, “the short man with the funny mustache.” By turning him into He Who Shall Not Be Named, they take away his influence and his power. The south does the opposite when it puts men on pedestals with messages like,

“The world shall yet decide, in truth’s clear, far-off light, that the soldiers who wore the gray, and died with Lee, were in the right.”
Monument in Anderson County, South Carolina 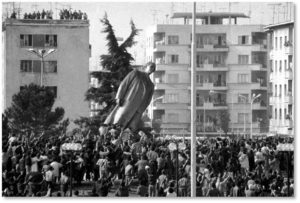 On this issue, I side with those who want the statues removed. It’s no coincidence that people pulled down statues of Stalin and Lenin after the Soviet Union fell.

They understood the power of each monument and the implicit message it conveyed by looming over public squares. We cheered them when these monuments to Communism crumpled.

It’s about time we did the same here in the United States.