We have entered the age of oversharing and, just like an accident on the highway, we can’t look away. We slow down, we stare, we comment. What is private has become public; we live in a culture that thrives on voyeurism in the too-much-information age.

Social media feeds have replaced the likes of Louella Parsons to chronicle deeds and misdeed of the famous and infamous. Louella’s columns were read by 20 million people in 400 newspapers worldwide in the early ‘30s. Today three million people use social media.

We use it to rat out our friends, our family and even ourselves in the harsh glare of internet oversharing; overexposing our personal and private lives.

Breaking News and Too Much Information

Online media is the perpetrator, with a 24-hour delivery system keeping us up to date on who did what when. It’s impossible to stay on top of it and equally hard to separate fact from fiction.

Reporting is a mash-up of speculation, seasoned with a mix of gossip, real and fake news and half-truths; like flinging pasta against a wall we wait to see what sticks. In the rush to be first, reporters don’t fact-check before they publish. They would rather be first that right. Nobody reads the fine-print corrections on the back of the last page.

We are continually assaulted with a barrage of “breaking news” and political commentator Bill Maher recently observed, “news stations need to change their ticker feed from Breaking News to What the &^% Just Happened.”

You might be thinking it all started with Paris Hilton or the Kardashians, but you’d be wrong.  Kim’s bootylicious tweets began in the early 2000s but this kind of oversharing can be traced to early 19th century England. According to Bradford Mudge, a pop-culture specialist at the University of Colorado, we can thank the Duke of Wellington.

Mudge claims the Duke’s illicit love life was threatened by one John Joseph Stockdale, a publisher who tended towards the tasteless. He wanted to expose the duke’s affair with his mistress and threatened to publish their love letters. “Publish and be damned,” the duke replied. And so it began.

Before the advent of on line media, we had supermarket tabloids—the printed version of breaking news. True confession: I look at every headline while I’m in the checkout line.  If it’s in the National Enquirer, you know it’s true. 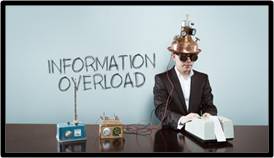 The phrase “information overload” was popularized by Alvin Toffler in 1970. Much of it is superficial dissonance but the sheer volume of it creates a tsunami of information so overwhelming we are unable to filter or process it. In fact, there is very little we can do to filter it besides turning it off.  Let me know if you’ve figured out how to do that.

Unfiltered information arrives through a wealth of online and offline media. When it comes to breaking a story—where nothing is off limits—we opt to forgo the facts in favor of ratings.  Anyone can say anything and leave it to others to disprove. Say hello to fake news. Say hello to POTUS.

Too much information is an enigma. It’s irritating and necessary at the same time. We count on multiple devices to receive information:  laptops, desktops, smartphones, tablets, televisions, and of course social media connections. Let’s not overlook reality TV, which raises too much information to new heights.

There is also the physical world, governed by appointments, meetings, and just plain living. It is nearly impossible to be off the grid in the too much information age.

Oversharing is the act of sharing too much information, or TMI, with people who are not always prepared or qualified to handle it. It’s a testimony to Web 2.0, emphasizing user-generated content, usability and interoperability. People with internet access transmit their lives—In words, photos, videos, and graphics—to anyone else with internet access.

With all this access, we no longer value privacy. Remember when (pre-social media) certain subjects were taboo in public conversation, like intimate relationship details and how much you paid for something? I still don’t want to know these things, but no-stone -unturned reporting offers it to a public that eats it up. Our respect for privacy has eroded and we have become world-class voyeurs into the lives and times of others.

People still don’t realize social media is a permanent record. In the movie The Social Network  we are reminded of the permanence of our comments with this memorable quote:

“…As if every thought that tumbles through your head is so clever it would be a crime for it not to be shared. The Internet’s not written in pencil, Mark, it’s written in ink.”  Indelible ink.”

Forgetting the permanence of online postings comes with risks.  Once the oversharing line has been crossed; it is nearly impossible to wipe the drive that stores those images.

Everyone wants their 15 minutes o fame and with social media we get it. When it was new, the most serious thing on Facebook was someone changing their status from ‘single’ to ‘in a relationship.” Today it is online therapy, where people share a range of emotions from deeply personal to hysterically funny. 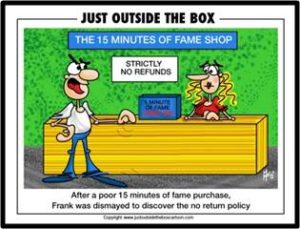 We even share the horrible events in our lives; because we get the emotional support we need from our internet circle when something bad happens to us.  It’s a good thing with a downside—social media has made it impossible to separate our personal and professional lives. We own what we share. Each of us is responsible for the brand we create.

The take away is that oversharing has become acceptable, but only you can decide what, and how much you share.  Extreme sharing becomes a never-ending quest to be visible, popular, interesting and above all, to show the world you have succeeded. And that lasts a lot longer than 15 minutes.