Every week another member of the robot army emerges from labs and companies like the warriors of Cadmus springing from a dragon’s teeth. Tech and news media greet each new invention with wide-eyed wonder that sees only goodness in each innovation. They laud improved efficiency and greater productivity seemingly without regard for any possible downside.

To keep you up to date, here are five of the latest mechanical arrivals and automated wonders:

Bricklaying Robot: Fastbrick Robotics, an Australian company, has announced a robot that can lay over 1,000 bricks per hour. The Hadrian X can build a house four times faster than human bricklayers. It’s easy to see where laying bricks is one of those predictive and repetitive tasks that lend themselves to automation. Plus, faster bricklaying makes for cheaper construction. 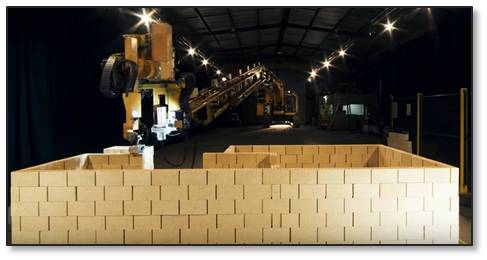 Given that Fastbrick Robotics plans to commercialize their device, it would seem prudent for human bricklayers to develop a Plan B. They might learn to run the Hadrian X, which cuts and grinds the bricks before applying an adhesive and using a laser-guided system to set them in place. Or they could specialize in small projects that don’t warrant the use of a big expensive machine. Either way, this robot will cut into the number of construction jobs available to people.

Agricultural Robot:  From Japan we get robots that do the work of farmers. This makes sense in a country with a declining birth rate and a disinclination to accept field workers from outside the country. A tomato-harvesting robot from Squse takes 20 seconds to identify a ripe fruit and harvest it. The company offers no information on how fast an actual human being can do this but I suspect it’s a lot less because Squse is working on speeding up the process. 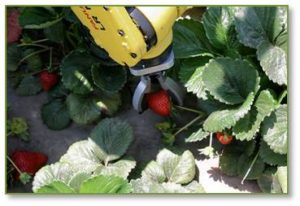 Both Los Angeles-based Robotic Harvesting and Utsonomiya University’s graduate school of Engineers in Japan, along with others, have developed strawberry-harvesting robots. The university is considering, “adding a function to estimate the position of the robot based on a navigation method that uses an environmental magnetic field.” Wow. Even children just kind of reach down and pick with simple hand- eye coordination.

Emotional Robot: Feeling lonely? Slightly blue? Need an emotional pick-up? Well, you could get a dog. That would take you out of the house twice a day and make it easy to meet other people. Or you could get Pepper, a plastic device from Softbank, a Japanese company, that wants to sell you an emotional pal. Pepper can supposedly read your emotional state and respond to it with an appropriate behavior. Pepper will dance, play peek-a-boo, or do something silly. It can also play games, track your calendar appointments and take information from the Internet. Clearly, the Japanese prefer cold plastic to warm immigrants. 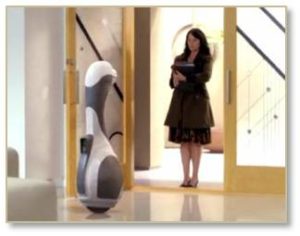 Eventually Pepper will do a lot more, though, because Softbank is reaching out to developers to create “android apps.” One shudders to think. Oh, they will pitch it as your central device for the home. Science fiction writers have been exploring that concept ever since Ray Bradbury wrote “The Veldt” back in 1950.

And we’ve seen other versions of it since, including Serge, the Graystones’ “butler” on the second round of Battlestar Galactica. I can accept the idea of a robot that controls all of a house’s systems and appliances—that’s just an extension of the Internet of things. But when it comes to emotional support, I’d rather have a dog.

Medical Assistant Robot: Julie Shah, who leads MIT’s Interactive Robotics Group at the school’s Computer Science and Artificial Intelligence Laboratory, is working on a humanoid robot that would assist doctors. It would perform tasks such as assigning patients to the appropriate doctor, moving patients to operating rooms and settling them into beds. Ms. Shah acknowledges that this is actually a complicated job that requires complex code. Yes, Prof. Shah, that’s why nurses do it. Her goal is to have the robot train novice nurses and doctors and she claims some success in that regard. I can only imagine how Nurse Jackie would have responded to a plastic-and-silicon device telling her how to do her job.

Waitron Robot: Several restaurants in the Chinese city of Guangzhou replaced their human waiters with robots—but then got rid of them and brought back the people. The robots, it seems, had their own problems. They couldn’t keep soup from spilling and had problems with tasks like pouring water and placing food on the table. They also broke down a lot. I can see a whole Saturday Night Live routine based on eating in one of these places. Restaurant managers acknowledged pretty quickly that human beings do some jobs better.

In addition to performing tasks, however, people enjoy interacting with other people. Eating out, at least at the high end, is as much an experience as it is the consumption of food. People — hosts, servers, sommeliers, and even busboys –contribute to that experience. Even at mid-range establishments, diners want to interact with people. How many times have you asked a server what was good today or whether the scallops or the steak would be better? What kind of answer would you get from a robot?

But Is There a Market?

More members of the robot army have appeared—lots more. What strikes me about this rush to mechanize human jobs, however, is the thinking behind them. It appears limited to whether the technology can be developed. But as we all know, just because something can be done doesn’t mean it should be done.

I spent many years working in startup companies that introduced new products to the market. The best success came when companies had researched the market and developed a product that solved a real problem, performed a necessary service, or improved a business operation. The worst happened when the company launched a product for which there was no market. Someone thought the product was a great idea—but no one really needed or wanted it. 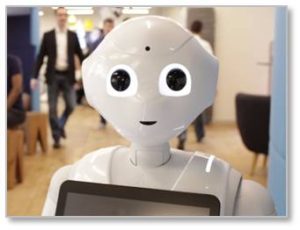 I can see a growing market for agricultural robots (pun intended). All that stooping and bending in the hot sun makes harvesting a tough job that many people don’t want to do. They don’t need to migrate in for the picking season. A storage shed will suffice. Also, robots don’t need to eat or rest and they certainly won’t contaminate crops with e coli bacteria.

Big agricultural corporations will find these benefits very attractive. As long as the mechanical pickers don’t break down in the hot sun or malfunction and smash a whole field of tomatoes, agribusiness might find them cost-effective replacements for people. Plus, if you’re worried about illegal immigrants taking over American jobs, you can invest in agricultural robots.

For health care or emotional support, however, I can’t imagine anyone outside of Japan preferring to find solace in a plastic face with Raggedy Ann eyes. When you’re sick, hurt or in pain you want an experienced mind, a sympathetic voice and a competent hand, not an impersonal device. And why did MIT decide there was a market for replacing nurses and instructors with devices? What demand does that fill?

Some of these new robots will succeed, even though they take jobs away from people. Others will fail because not enough people want or need them. The only thing we know for sure is that the robot army marches on.