When I wrote my post on Why Women Don’t Speak Up About Sexual Harassment, I didn’t expect the United States Senate to provide me with such an immediate demonstration.

One Tuesday morning, President and Abuser-in-Chief Donald J. Trump once again used his Twitter account to lash out at someone who had criticized him, in this case N.Y. Senator Kirsten Gillibrand. Sen. Gillibrand had called upon Donald Trump to resign in the face of allegations that he had abused women, reinforced by his taped bragging that he had done exactly that. 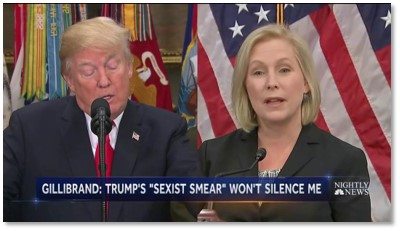 Pres. Trump attacked, as is his style, with an offensive and sexually suggestive Tweet:

“Lightweight Senator Kirsten Gillibrand, a total flunky for Charles E. Schumer and someone who would come to my office ‘begging’ for campaign contributions not so long ago (and would do anything for them), is now in the ring fighting against Trump. Very disloyal to Bill & Crooked-USED!”

Sen. Gillibrand responded immediately, calling his comments a “sexist smear” and saying that he could not intimidate her.

Senate Democrats supported her, rallying around one of their own to criticize POTUS for his crass and vile suggestion. Senate Republicans? Not so much. Instead of supporting a fellow senator and colleague, they responded with—silence. 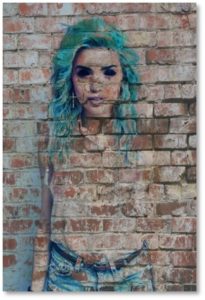 Their silence reminds women that accusing a man of sexual abuse does not mean that your colleagues will support you. In this case, some did while over half took a careful step or two back and turned their faces away. “What, me talk?”

You would think that Republican women in the Senate would have stepped up to defend Sen. Gellibrand, but no. The Senate Women’s Caucus has nothing to say about his Tweet and all the senators calling for Donald Trump’s resignation are Democrats and Independents.

The media has no such constraints, however, nor are they afraid to call a sleazy insult what it is. Here’s how the New York Times commented on how Pres. Trump’s Tweet,w with an excellent description of why women don’t speak up:

“. . . brought this distinctly demeaning form of harassment into sharp relief. Rather than objectify its target as alluring, it dismisses her as incompetent. It tells the woman, and everyone else in her workplace, that she can succeed only if she trades on her sexuality and not because she is smart, savvy or resourceful. There’s a reason a powerful woman so often gets smeared as having ‘slept her way to the top.’”

The editorial board of USA Today went even further:

“A president who would all but call Sen. Kirsten Gillibrand a whore is not fit to clean the toilets in the Barack Obama Presidential Library or to shine the shoes of George W. Bush.

This isn’t about the policy differences we have with all presidents or our disappointment in some of their decisions. Obama and Bush both failed in many ways. They broke promises and told untruths, but the basic decency of each man was never in doubt.

Donald Trump, the man, on the other hand, is uniquely awful. His sickening behavior is corrosive to the enterprise of a shared governance based on common values and the consent of the governed.”

Why Women Don’t Speak Up

To speak would mean acknowledging Pres. Trump’s awful record with women and his well-documented trail of defending himself by demeaning his accusers. It would have meant disowning Alabama Senatorial candidate Roy Moore instead of supporting him. It would have driven them to clean their own house by forcing out offenders, as the Democrats just did with John Conyers and Al Franken.

It’s so much easier to just look the other way and pretend that this unseemly behavior has nothing to do with you. Which is exactly why so many women remain silent instead of speaking up. Why bother, when even your own sex will put party over morality and close ranks against you?

At some point, in some future election, this will come back to bite them. In the meantime, Senate Republicans provide a clear example of what happens when a woman speaks out and her colleagues close ranks to shut her out.

This whole episode is, as former Vice President Joe Biden said, “Disgusting.” Not just for what was said, but for what has not been spoken. To quote Joseph Welch in his famous exchange with Wisconsin Sen. Joe McCarthy: