“Forgiveness without accountability is a perpetuation of the original wrong.” — Martha Minow 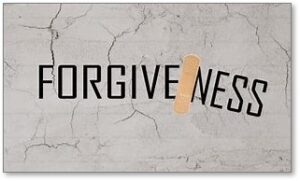 We’re hearing a lot these days about forgiveness. I don’t remember ever hearing this much about forgiveness outside of a church sermon. It’s in the news because people from different walks of life are calling for us to forgive the terrorist mob that invaded the United States Capitol in search of hostages and revenge. It’s not that simple.

While I’m not either a cleric or a psychologist, I have a few opinions about forgiveness.

Why Should We Forgive? 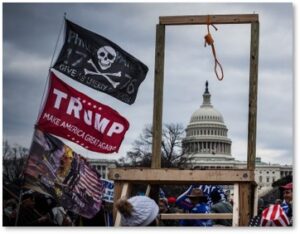 All of these pundits and editors  have one thing in common: they assume we’re in the right, the rioters are in the wrong, and it’s up to us to determine their fate.

If you turn the lens around, you find that the rioters think they’ve done nothing that requires forgiveness from anyone—especially the other side. In fact, they believe that they acted at the bidding of A) God, B) Donald Trump, C) Jesus, D) Q-Anon, and/or E) Republicans in Congress like Ted Cruz and Josh Hawley.

Should we forgive them? Why? Believing they have done nothing wrong, these militias fully intend to do it all over again, but better armed, and as soon as they can. Listen to the messages in this clip and ask yourself if any of these rioters give a rat’s ass about forgiveness.

The Wages of Forgiveness

What does forgiveness buy us? The argument is that convicting them of crimes will increase recruitment for these militias. Plus, putting them in prison will only make them tougher and angrier. So what? Does anyone honestly think that making them pay for criminal behavior is going to make things worse than they already are? Do we really believe that forgiving them will make them put down their weapons and sing Kumbaya?

They will interpret forgiveness as appeasement, a Get-Out-of-Jail-Free card that allows them to keep right on committing violence and insurrection.

We know what appeasement by forgiveness buys us. As Dasia Moore said in her Boston Globe article: “Amid unity calls, a lesson from the Reconstruction Era:”

“Ultimately, entire societies pay the price for allowing harm to go unaddressed and unaccounted for.”

We have seen how this worked before in American history.

After the Civil War, the South defined forgiveness much the same way Republicans are doing now: absolution for rebellion and a return to power. The post-war nation conceded and withdrew federal oversight of the former Confederacy. The result?

As Harvard professor and history scholar Henry Louis Gates, Jr., described it: “The North forgave the South…at the expense of the belief that Black people and white people are fundamentally the same and equal as American citizens.” Forgiveness without reconciliation allowed racial grievance to fester and fed the commitment to white supremacy. No good came of that. 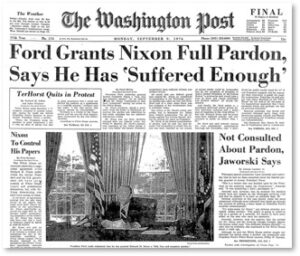 Gerald Ford’s forgiveness of Richard Nixon’s criminal behavior taught today’s domestic terrorists their next lesson in escaping consequences: a pardon will be forthcoming. You can keep your freedom and go on with your life. No good came of that.

And when Barack Obama chose to just move on from the Great Recession without holding any of the perpetrators to account, he damaged confidence in government, created some of the anger against “elites” that motivated the rioters, and infuriated even the liberals. No good came of that.

Do Nothing Out of Fear 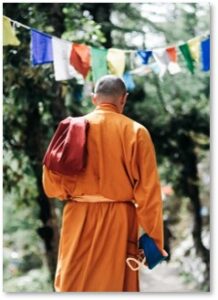 Plus, giving them a free pass so as to avoid making them even angrier and more violent would be acting out of fear of what they would do next. And here’s the thing to know about that: Fear attracts the object of fear.

Whenever you act out of fear you draw to yourself the very thing that frightens you. Buddhist monks in Tibet know this. They will do nothing out of fear, even when faced with the prospect of torture by the Chinese military.

Forgiving the Capitol rioters would not make them go away. Instead, it would embolden them to attack again.

For those reasons, we must arrest, prosecute, convict and sentence the rioters—and hit them with the most severe crimes we can. To date, I believe they have been under-charged; that is to say, charged with lesser crimes than they actually carried out. We have to stop this. And stop it now.

There can be no forgiveness for the Capitol rioters or we will be held hostage by domestic terrorists for at least the next four years and probably longer. We may choose to let bygones be bygones but that doesn’t mean they will actually be gone.