Over the last week we have seen three good movies—and this at the end of the summer when a good film can be as hard to find as the rain we need so badly in New England. My husband and I don’t normally see three movies in a week; that’s a bit much even for us. But on Wednesday we took advantage of WSJ+ free tickets to see the first, picked up a second on Saturday night just for the two of us, and went with movie-lover friends to a third on Sunday. To our astonishment, we enjoyed all three. In chronological viewing order, here’s how the three good movies broke out.

The Light Between Oceans

Having enjoyed the book by M. L. Stedman for our book group I was predisposed to like this movie and I wasn’t disappointed. I can’t really tell you much about The Light Between Oceans without giving away parts of the plot that should really come as a surprise to the viewer. Here’s the official description:

“A lighthouse keeper and his wife living off the coast of Western Australia raise a baby they rescue from an adrift rowboat.” 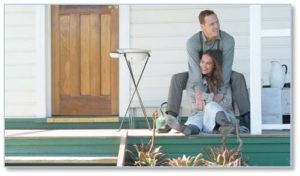 The settings are perfect, the photography exquisite, the casting well done and the script treads a fine line but stays just this side of sentimental. Yes, I had some quibbles: the movie underplays the tragedies that drive the wife (Alicia Vikander) to a heightened emotional state. We need to know this to understand her demand that her husband (Michael Fassbender) violate the rules of his job. It also underplays the second part of the story and that’s a good thing.

The Light Between Oceans didn’t open big: it made only $5.9M on its opening weekend on a production budget of $20M. Perhaps good word of mouth reviews can change that. I recommend seeing it if you like complex movies about human relationships.

The second of our three good movies is already picking up Oscar nominee mentions and for good reason: it’s excellent all around, even if the plot couldn’t sound less engrossing:

“A divorced dad and his ex-con brother resort to a desperate scheme in order to save their family’s ranch in West Texas.”

But therein lies the tale. Hell or High Water runs like a combination of Bonnie and Clyde and The Last Picture Show. It manages to combine drama, pathos, humor, and tragedy successfully. Are we rooting for the bad guys or the Texas Rangers? Who, exactly, are the bad guys, anyway? Who should we identify with? Although the answers can get fuzzy, we go along for the ride and love every minute. We also learn why it’s not a good idea to rob a bank in Texas. 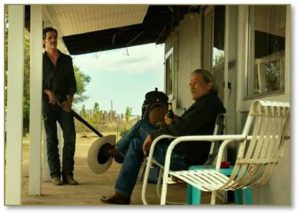 Chris Pine and Jeff Bridges give excellent performances—cool, controlled, human and empathetic. The last scene between the two men is just a masterpiece of understated dramatic tension. The supporting players also draw us in, as shown later in the film by a real gut-wrenching moment.

Hell or High Water has earned its good reviews over four weeks in distribution although it hasn’t (yet) pulled in a lot of money. This underrated film has grossed $14,601,633 on a production budget of $12M but I hope that goes a lot higher over the next few weeks. I’m rootin’ for ‘em.

Kubo and the Two Strings

Animated movies can run the gamut from downright silly to sublime. They can be barely tolerable in the company of children or engrossing for unaccompanied adults.

Kubo and the Two Strings falls into the latter category. At two hours, this movie is longer than most animated films but it picks you up and never lets you down. The stop-motion animation, which is simply gorgeous, draws you into this fantasy version of Japan and the hero’s journey of young Kubo. The story in a origami nutshell is:

“A young boy named Kubo must locate a magical suit of armor worn by his late father in order to defeat a vengeful spirit from the past.” 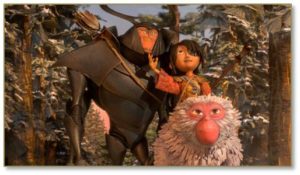 Kubo with Monkey and Beetle

But that doesn’t’ even scratch the surface. This is the kind of animated film that adults can go to and enjoy by themselves—no children required. It’s suitable for children of about 9 years old and up but the four of us frown-ups loved it and were enchanted right through to the end. (BTW: Stay for the credits and watch how the team builds a stop-motion monster.)

My one quibble is that I would have preferred more Japanese actors voicing the title roles. Although the cast is excellent they sound a tad too American and I found that jarring. They should have had more confidence in the content of this movie and matched Japanese voices to it instead of whitewashing the cast. We do get George Takei and Cary Hiroyuki-Tagawa, though, and that counts for a lot.

In two weeks Kubo and the Two Strings has grossed $34,236,714 on a $60M production budget. I wish it many more dollars because it deserves them all.

There you have it: three good movies to choose from whether you want to visit an island off the coast of Australia in the 1930s, current-day Texas, or magical Japan.