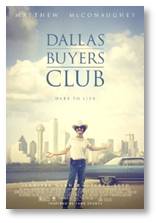 The Dallas Buyers Club is one of those small, independent films that don’t get as much support in terms of distribution and promotion as they deserve but get receive amounts of love from the critics–and with good reason. Audiences love it, too. The Tomatometer gives The Dallas Buyers Club a 94% Fresh rating (critics) and 93% Liked (viewers),

It’s a fascinating story told well with a good script by Craig Borten and Melisa Wallack and an excellent cast. Made with an estimated production budget of only $5,500,000, it has grossed only $6,370.000 in four weeks. That’s barely a blip when blockbusters like The Hunger Games: Catching Fire bring in $159,000,000 in its first week.

The Dallas Buyers Club stars a virtually unrecognizable Matthew McConaughey along with Jennifer Garner, and Jared Leto. It tells the simple but powerful—and true—story of Ron Woodruff, a loser intent on wasting his life in pursuit of booze, drugs, and rodeo groupies. Mr. Woodruff would probably have drunk himself into an early, well-deserved and anonymous grave except for the fact that he was diagnosed with HIV in 1985 and given 30 days to live. Most of us would have found this a wake-up call but one should never underestimate the power of a death wish. After watching him wash down bootleg AZT with a fifth of bourbon and a few lines of coke, one can only conclude that his death wish was pretty powerful.

What wakes Mr. Woodruff up, jerks him around, and sets him on a new course is the discovery that AZT had side effects at the heavy dosage given at that time—bad ones. He starts reading everything he can get his hands on, starting with Time magazine and extending to medical journals like The Lancet. He begins acting on that knowledge, first to help himself and his new friend Rayon, and then to help others who were left without hope by the clinical trial system of the 1980s. When he can’t find the experimental drugs he wants in this country, he goes to others. Along the way, he makes some interesting enemies from a hospital doctor to the U.S. Border Patrol and the Food and Drug Administration.

It’s a fascinating story made gripping by Mr. McConaughey’s performance. The critics have focused on his transformation as an actor who has gone from silly buddy movies and romantic comedies to more serious material, like The Lincoln Lawyer and last year’s Mud (see previous post “Mud on the Run and Free Range Children.” The more visible transformation was the nearly 40 pounds he dropped to plan Ron Woodruff in this movie. Given that Mr. McConaughey was slender to begin with, it’s hard to imagine that he did this without putting his health at risk. But it is not the first time Mr. McConaughey has manipulated his body mass for a movie role, however.

How to Be an Action Hero

In 2002 he bulked up for the role of Denton Van Zan in Reign of Fire, a dragon-apocalypse movie with an unappreciated cast that includes Christian Bale, Gerard Butler, Alexander Siddig, and Alice Krige. (It was fun, if you didn’t mind the helicopter that never needed refueling.) At the time, I thought Mr. McConaughey was re-inventing himself as an action hero, the way Bruce Willis did between Moonlighting and Die Hard, by taking the first of three steps:

But no. He skinnied right back down again for his role in 2003’s How to Lose a Guy in 10 Days. Then he buffed up for last year’s Magic Mike then stripped it off (and then some) for Dallas Buyers Club. Such drastic swings in body weight can’t be good for a person’s health.

There is a famous story about Dustin Hoffman doing something like this during the filming of the movie Marathon Man. As his character had to look like he’s stayed up for three nights, Method Actor Hoffman actually did it and showed up on set looking exhausted. Sir Laurence Olivier asked him why he looked so tired and Mr. Hoffman explained what he had done. At which Sir Laurence replied, “Try acting, dear boy; it’s much easier.”

I understand that it might be difficult to pretend to have lost 40 pounds but that’s what the special effects and makeup departments are for. After all, they shrank normal-sized men into Hobbits for The Lord of the Rings. Mr. McConaughey has now demonstrated that he is a serious actor, capable of handling a wide variety of roles, so I really hope he stops doing this.

The Dallas Buyers Club is a thought-provoking movie for adults who like to see more from a movie than men beating up on men, shooting big guns, blowing stuff up or acting like over-grown little boys. Granted, it provides a view into the Dallas underworld of seedy characters, drug use, and constant drinking that some might find uncomfortable. If you can get past that to Ron Woodruff’s rebirth as an AIDS activist, however, you’ll find it as gripping as we did. I recommend The Dallas Buyers Club to holiday moviegoers who want a break from action heroes, animated features, blood and gore, or sheer stupidity.