The Lone Ranger before the reviews came out.  Big mistake, kemo sabe. This movie is so bad, it’s difficult to list all the ways in which it went wrong.  First was Johnny Depp casting himself as Tonto. What was he thinking? This was an opportunity to create a strong positive role to counter Hollywood stereotypes of Indians and put a credible Native American actor in that role.  Instead, they gave the part that was owned by Canadian Mohawk Jay Silverheels to white Kentucky native Johnny Depp. Then they painted his face white and put a dead crow on his head. In an interview, Depp claimed to see this as an opportunity to “. . . pay his respects to the native American community.”  If this is respect, I’d really hate to see his idea of ridicule.

Before seeing The @Lone Ranger, I wondered why the Native American community had not protested this casting decision and insisted on putting one of their own in the role. The answer is twofold: (1) They never much liked Tonto to begin with, and (2) no self-respecting Native American with a shred of dignity could have performed this version of Tonto and lived with himself afterward. Native American blogger Adrienne Keene says she’s glad a Native person “wasn’t embroiled in that mess” and I think she’s right.Clayton Moore’s original Lone Ranger was an honorable man who treated Tonto with respect. Here, Depp’s Tonto is not the sidekick, he’s the motivator and Armie Hammer’s insipid John Reid is a clueless foil who lacks wits, charisma, drive, common sense, and honor. Who but a clod would abandon the man who had already saved him, walking away until he’s presented with a clear benefit to himself in going back to help Tonto?  But Depp’s Tonto is also crazy as a loon—or maybe the crow that he carries around on his head. The director tried to make Tonto seem mystical, a sachem who can talk to animals, but even Chief Big Bear (Saginaw Grant) tells Reid that Tonto’s “mind is broken.” 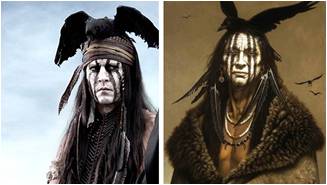 The framing device of a Wild West Show is taken from Little Big Man or The Princess Bride but it doesn’t work as well and interrupts whatever passes for a story. It also raises a few questions: Why is this kid alone in the Wild West Show?  Is Tonto really alive and just posing as a statue or a statue that really comes to life? Why is Tonto feeding the dead crow on his head? Why is the kid eating peanuts with the shell on?

The Lone Ranger goes downhill from there and the viewer is expected to either not see errors or just go along for the ride, uncritical and unthinking. Here a few examples of things we’re not supposed to know or even think about:

A Spirit Horse or an Equine Superman?

And speaking of Silver, there is as Tonto says, “something very wrong with that horse.”  He has to be the equine version of Superman because he:

These are all un-horse-like behaviors that could only be dreamed of in a Hollywood CGI master’s head—and probably someone who never got close to a real horse. We’re also expected to believe that something has gone wrong in nature and we are given carnivorous bunnies as examples, (yes, really) but there’s no reason for this unnatural behavior to occur so it’s just silly.

We Had Enough Before It Was Over

Had enough? We did, too—and long before the interminable 149-minute running time was up. At the end, the best we could say was that another generation of kids would hear the William Tell Overture and think of the Lone Ranger. But the audience mostly consisted of senior citizens looking to go back to the golden days of yesteryear, so maybe not. The Lone Ranger steals from a long list of other films from the Indiana Jones and Pirates of the Caribbean franchises to The Goonies. If Depp had played it straight and given us a solid western with the two main characters coming together to save the day, it would have been a much better film.  Bottom line: The Lone Ranger is Johnny Depp’s movie and his portrayal of Tonto really owns the film but what he does with it is enough to make you scratch your head. Just make sure there isn’t a crow on it.