Regular readers of The Next Phase blog may have noticed that I haven’t written about movies much lately. There’s a good reason for that. Spring and fall are the shoulder seasons for movies: when the studios release films that weren’t big enough to be summer blockbusters, just right for the holiday rush or good enough to be eligible for the Academy Awards. In other words, that’s when a lot of junk shows up in the theaters.

Most of it is forgettable but every once in a while a good movie shines through. And, fairly regularly, you can catch something worthwhile that didn’t rate the big Hollywood marketing treatment. They slide into the theaters and out again almost before you know they were there. Last week I was fortunate enough to see two such films, both of them about genius of different kinds.

This animated movie by the master of the genre, Hayao Miyazake, won’t make much money because it was made for adults. Yes, an animated movie for adults—an almost unheard-of concept in this country but far more popular in Mr. Miyazake’s native Japan. It is a bio-pic, following the life of Jiro Horikoshi (Joseph Gordon-Levitt), the aeronautical engineer who brought Japanese aviation into the twentieth century. It is beautifully animated and the American cast is superb. There are places where it’s difficult to tell whether Jiro is dreaming, daydreaming or in reality, whether he’s in current time or a flashback, but those are minor problems. Mr. Miyazake uses dreaming as a way to connect young Jiro with the Italian airplane designer Count Giovanni Battista Caproni (Stanley Tucci) and to give them a relationship that could not have existed in reality.

Although he demonstrates, genius and determination, accomplishing greatness through hard work, Jiro was a flawed hero for me. I found it difficult to really, fully root for Jiro to succeed because his greatest design was the Japanese Zero, an airplane responsible for many American deaths in World War II. The Wind Rises presents Jiro as designing planes for the love of flight not as death machines but it’s hard to tell when or if patriotism took over despite his best intentions.

Animated But Not for Children

Although it is animated, The Wind Rises is very definitely not for children. Its images of a Tokyo devastated by the Great Kanto Earthquake of 1923, airplanes exploding, a train crash, Jiro’s wife Kayo (Mae Whitman) dying of tuberculosis, and other scenes would be distressing for young children, although appropriate for adolescents.

The movie received favorable reviews and an excellent score on Rotten Tomatoes and was even nominated for an Academy Award for Best Animated Film. Unfortunately, it lost that honor to the American film Feral. To date, it has grossed only a little under $2 million.

Still, I recommend this movie for anyone who wants to know more about the history of aviation or the history of Japan, or who wants to enjoy wonderful animation and excellent storytelling. Catch it while you can—@Wind RisesFilm won’t be around long. 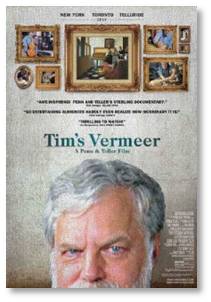 This movie could not be more different, except that its exploration of what constitutes genius drifts into the realm of obsession. Tim Jenison, an engineer, inventor and successful entrepreneur (Videotoaster, Light Wave, TriCaster) becomes fascinated by the mystery that underlies the paintings of Dutch Master Johannes Vermeer.

Unlike other great masterpieces of that time or any time, his works have no under-drawings (as revealed by X-ray). Yet they are painted in such detail they are photo-realistic with an unmatched treatment of light. Mr. Jenison asked what was the likelihood that even a master could just start painting and produce something so detailed and so beautifully illuminated.

He develops a theory that Vermeer used optics and he embarks on a mind-boggling (one might say obsessive) five-year research program to prove it. He decides to paint his own Vermeer and chooses “The Music Lesson” as his subject. In a warehouse he recreates the entire room shown in the painting, including building the furniture, having both costumes made, and creating the beveled window. His efforts are documented in the film by Penn Jillette and Teller (the magicians Penn & Teller). 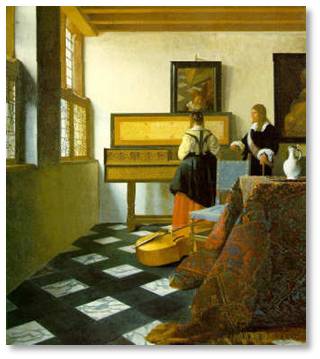 When the setting is as accurate and detailed as he can make it, Mr. Jenison sits down to begin his work, using only paints that he grinds himself from materials that were available to Vermeer. He spends 188 days hunched over a canvas, with a device that he invented to re-create the painting.

I won’t spoil the plot (such as it is) by revealing what constitutes the device or how it allowed him—and most probably Vermeer—to paint light that can’t be perceived by the human eye or a level of detail that is simply jaw-dropping. Suffice it to say that the movie is gripping from start to finish, although there are times when one exclaims in disbelief.

It’s difficult for those of us with finite financial resources to imagine anyone putting as much money as Mr. Jenison does into this project. It’s equally difficult for us to imagine having the kind of confidence that he displays in making the whole thing work. (He’s going to call the Queen of England? Really?)

Tim’s Vermeer got even higher Tomatometer scores than The Wind Rises: Critics gave it a 93% Fresh and viewers an 83% Liked. And it’s only made about half a million—much less than he probably spent on the project. But it is fascinating and the movie does work. We become as engrossed in his project as Mr. Jenison, although we spend far less time in the theater than he did in his warehouse. You won’t regret any of it.