I haven’t written much about the movies lately, mostly because so few of this year’s summer movies have lured us into the theater. Even when we actually saw one it rarely provided food for thought beyond two hours of mindless, repetitive action without much of a story to support it. But here’s a roundup of the summer movies we (or I) have seen recently. I leave it to you to decide whether any of them are worth the price of admission—even if you have to wait until they hit the small screen.

Six Summer Movies and the Scoreboard

Recommendation: Some children’s movies or animated features, like Up, Inside Out or Howl’s Moving Castle are just as entertaining for adults as for kids. This, however, is not one of them.Go with children and you will enjoy it. They will be mesmerized by Elliot, the dragon (and so will you). He’s not Drogon but, then, it wouldn’t be a children’s movie if he was. 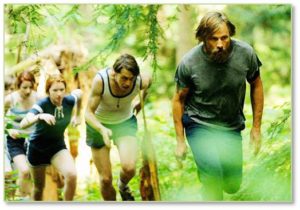 The biggest problem with Captain Fantastic was the title. It has no real meaning in the context of the movie at best and at worst it misdirected some people who would have otherwise gone to see it.

I spoke with several charter members of its target audience who had ignored Captain Fantastic because they thought it was a superhero movie or an animated children’s film. With Captain America all over the multiplexes, who could blame them? The one-sheet poster didn’t help at all. Better marketing needed, people.

Recommendation:  If you like complex movies about the human condition, the striving to be better people and the struggles involved, you will like this movie. Recommended for grown-ups and thinkers.

Recommendation; Jason Bourne and James Bond fans, along with lovers of action movies will enjoy this film. If you go with someone who fits this description, you will probably like it, too.

Recommendation: Star Trek and science fiction fans will see this movie as a matter of course. You will get exactly what you expect and not a single warp factor more.

Recommendation:  Meh. It’s not great and it’s not terrible. I hate to say this but this Ghostbusters is just two hours of mindless whatever. You won’t love it and you won’t hate it, despite all the fanboy frenzy.

Recommendation:  Fans of Jane Austen, Downton Abbey, Upstairs Downstairs and other period dramas will enjoy it, if only for the costumes. They are very good. And the snark. The snark is excellent.

You may have detected a theme in my comments: lack of originality. That reliance upon dependable franchises and remakes of old movies appears to be coming back to bite Hollywood in a big way this summer. Perhaps the public has grown tired of sequels, series, and remakes. Or maybe the cloning degeneration factor has had an impact. Every subsequent generation of a clone grows weaker, less healthy and more prone to problems than the iteration before it.

Ben Fritz tells us in his Wall Street Journal analysis, “Rising Box Office Masks Glut of Big-Budget Film Flops,” that Hollywood is getting the message.  Their solution? We’ll have to wait until next year to find out.