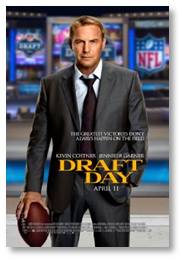 t’s the Moneyball of football, a movie that demonstrates that front office strategy, tactics, and blindsides can be more exciting than the action on the field, at least to some of us.  There is no running, no blocking, and only a little sacking of the quarterback.  There are also no guns (not one!), no explosions, no black helicopters—just guys outplaying one another on the phone.

Major-league sports have been very good to Kevin Costner. He has already done baseball three times (Field of Dreams, Bull Durham, For Love of the Game), golf (Tin Cup), and bicycle racing (American Flyers), so @DraftDayMovie adds NFL football to his sports resume. Unlike previous outings, however, he’s not an athlete in this one; he plays Sonny Weaver, manager of the Cleveland Browns, and he wears a sports jacket, not a sports jersey. His job isn’t to throw a perfect Hail Mary pass, it’s to pull together the perfect team, given the restrictions of the Browns’ position in the draft and the desire of the team’s owner (Frank Langella) to add a player who will give oomph to the team.

The Brainy Member of the Team

Director Ivan Reitman throws in a love interest played by Jennifer Garner and she’s a cool brainy member of the Browns team who challenges Sonny to man up and grow up. In all of the shenanigans that go on in the front office, where boys are boys regardless of age, Ali is the only real adult in the film. And an impressive adult she is, too.  She has a law degree and an incredible memory for every aspect of the game, including stats of big games past. She had to fight her way into this testosterone-soaked sport and it shows. When the men around her are butting heads or going chest-to-chest, throwing rich-owner tantrums or panicking about deadlines, Ali keeps her cool and supplies the information what’s needed when it’s needed.

Is Draft Day a real exploration of what it’s like in an NFL front office during the big event?  Probably not.  To do that, it would have to be a documentary. Jason Gay in The Wall Street Journal calls it “crazypants” in his article, “What We Want From Sports Movies,”  but that makes the movie sound more wacko than it really is. Although Mr. Gay does note the year (1999) when the legendary Mike Ditka unloaded eight draft picks for the right to get Ricky Williams for the New Orleans Saints, so I guess the action is not totally out of bounds. 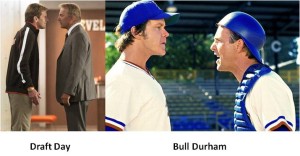 Confrontations on and off the field

Draft Day is a modest little movie that shows it’s possible to get as much drama out of playing head games as there is in playing games with your head.  There’s a big difference.  For starters, one makes you big bucks and the other gives you brain trauma.

Draft Day scored 61% Fresh with the critics on the Tomatometer but more forgiving audiences gave it a 72% Liked.  Draft Day has grossed $19,360,863 in its first two weeks, a good enough number given its $50 million production cost.  It was filmed in Ohio, after all, and special effects are limited to aerial photography and video replays of some games.