Each of us has a way of seeing the world. The experiences of life, upbringing, education, and cultural exposure shape this outlook. When we think of these points of view, two words are used interchangeably even though they are not; perspective and perception. 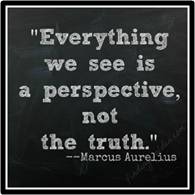 Perspective is a point of view; perception is the interpretation we apply to our point of view. The differences that exist between perception and perspective can be subtle but they are very real and shape our awareness and opinions. Both provide a framework through which we gain a better understanding of the world but both can limit our awareness as well.

On a recent trip to Israel (not my first) I had reason to think about this as I spent a considerable amount of time going through security in and out of both countries. Sixteen years ago, when I made my first trip, much of the security was manual. I went through searches and questions (think good cop/bad cop) and changed planes in Vienna for my connecting flight to Tel Aviv.

I was required to be at my gate one hour before boarding and the gate number and flight were not called. The gate was cordoned off and we went through an additional security check, one passenger at a time, asked to explain why we were going, provide a local address and of course, a passport.

My carry-on bag was emptied, searched, and sealed with security tape. I could not open it again until after I boarded the plane. Once inside the gate, no one could leave. There were bathrooms within the boarding area. I wondered what kind of country I was going to and if I would be in danger. I only knew what I heard, and from that I formed opinions about the country and the people.

What You See is What You Think

On my first trip I thought about the volatility and violence this country has lived through. I mentally and emotionally took sides based on my perception of the political and religious factions at war with one another, I saw what I wanted to see, and left with the feeling that peace would never come. 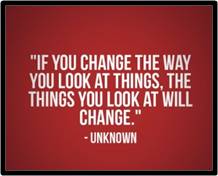 Cultural background with a moral compass filter is most often the lens through which we judge what we see. To understand the Israeli culture one must understand their military experience. Service in the army is mandatory for men and women when they reach eighteen; lasting 22 months for women and three years for men. Men also serve in reserves for another 25-30 years. Many of my colleagues are former members of Mossad, the Israeli Intelligence Organization.

The army influences everyone because everyone serves. Its systems and values transfer to civilian life, emphasizing self-reliance, strong group interrelations and team success.  Since I work for an Israeli based company this was evident when my colleagues and I began an intensive, week-long collaboration on our largest program of the year.

It is easy to give opinions when we don’t share the experiences and feelings of others. It’s even easier to share our opinions and miss the perspective of the things we are speaking about. After a week of focused team work the camaraderie we developed began to re-shape both my perspective and my perception.

Everyone has an Opinion

Blog sites, Twitter, Instagram, Facebook and other social media sites have made us all verbally and visually opinionated. We are judged on what we say, how we say it, and what we write for others to read. We judge others the same way.

Israelis are opinionated! It’s one of the things I like best about them—you always know where you stand. As I worked alongside them we got to know each other well. They are fascinated by our current political candidates and the highly charged issue over gender neutral bathrooms. One of my colleagues commented “in Israel we don’t really care what’s in your pants, we just care that you’re Jewish!”

But the realities of their political climate are evident. Entering a mall or shopping area requires a bag search. Armed guards (the scary kind) have a strong presence in large public areas. By the third day I noticed my women colleagues carried only small wallets, no large purses. No matter where I went, I felt safe.

When I arrived at Ben Gurion airport to begin my trip home I passed through seven security checkpoints, including a check for explosive residue on hands and inside carry-on bags. All of them were efficient and thorough. Local citizens entering and leaving use electronic ID cards and biometric hand scans. No long lines, no waiting.

By the time I took my seat I knew it was the safest flight I’d ever taken. I also knew my perceptions and perspective has been broadened by people who took the time to share their culture with me. They showed me videos of their children, made Israeli cookies in my honor, and brought me to local restaurants and a spice market to enhance my culinary experiences.

I learned Hebrew phrases and a great deal about Judaism and its deeply rooted traditions. My new favorite word is one that means many things: peace, harmony, wholeness, completeness, prosperity, welfare, tranquility and even one of the sacred names of God. It is also used when saying both hello and goodbye. It’s a beautiful thing.

I am on vacation next week attending a King Arthur cooking class at
their headquarters in Vermont where I’ll be learning the fine art of puff pastry.