The people, culture and especially the cuisine of Israel have captured my heart! 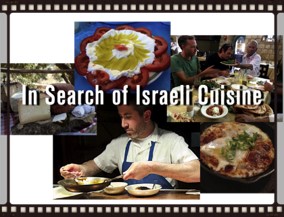 Food from the Israeli kitchen is an amalgamation of color, taste, and history. It has been strongly influenced by nearby geographic regions, blending the cultural and traditional influences of North African, Persia, Lebanon, France, Italy, and Eastern European to create a fusion of ingredients and flavor.

It is also defined by the ancient Biblical custom of keeping kosher; food prepared according to laws known as kashrut, grown organically and killed humanely. A kosher kitchen separates meat from dairy by using two sets of dishes and dishwashers. The blessing of a rabbi is not required although it’s a common misconception.

Israeli cooks preserve and share their ancestors’ recipes and today a new generation of chefs is showcasing them in restaurants. Israeli cuisine has gone from unknown to known everywhere.

I have been experimenting with this wonderful cuisine in my American kitchen for the past two years. It is healthy cooking—with taste!  In Israel, I enjoy local ingredients with accents of lemon, olive oil, and aromatic spices, along with vegetables, poultry, and lamb or fish. It’s easy to duplicate and, if you don’t have a cookbook addiction like I do, a bit of online research delivers authentic recipes. 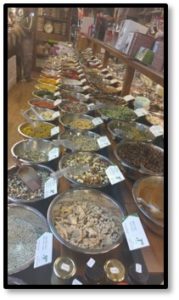 Nothing is bland in the Israeli kitchen. The food is fresh and colorful. Spices are the back notes of every dish, most of them local to the geography. This photo was taken at the organic shop around the corner from my Tel Aviv office, where I shop when I am here. At the entrance, you are greeted by the aroma of cinnamon, cloves, nutmeg and chilis. I love to purchase seasonings this way because you can smell the freshness.

Israeli cooks are skilled at blending and seasoning to bring amazing flavor to ordinary items. One of my favorites, Za’atar, is blended with olive oil and garlic, spread on a toasted slice of rustic bread, then topped with avocado, roasted tomatoes, olive oil and freshly grated cheese.

I do not leave Israel without honey and olive oil from the local kibbutz, where small batch processing reflects the hot climate and diverse floral landscape. Both are staples in my cooking because the flavors are unmatched.

to explore the Israeli kitchen, start with one of the most basic dishes—hummus. Trust me, it’s nothing like the supermarket variety, even if you are buying it from the good guys like Whole Foods or Wegmans. Make your own, and you’ll never eat it any other way.

I confess to using canned chick peas—It saves a lot of time.  I rinse them well and rub them gently to remove the outer skin.  This creates a smooth and creamy end result.

Chick peas are also the main ingredient in falafel. It is served with a traditional tahini sauce and this recipe includes an option for baked falafel for those looking to reduce the fat.  Which brings me to pita bread—wherein the falafel is served. It is so good: the only way to have it and not be in Israel is to make it yourself.

In fact, all Israeli bread is delicious and my resolution of a carb-free trip quickly becomes a distant memory. As an alternative to butter, they often serve a warm mix of apple jelly, honey and cinnamon. It made a believer out of me.

When it comes to hummus and falafel, purists insist they must only be made with fresh, not canned chick peas. I leave it to your conscience.

A dish from the Israeli kitchen that I love but do not make at home is  Shakshuka; a spicy tomato- based dish with an egg on top. It can be eaten for any meal, but my favorite is dinner when I arrive in Israel. My flight is long, departing on Friday and landing late Saturday afternoon. My hotel is kosher, meaning no hot meals are available on the Sabbath.

Benedicts (founder Lemuel Benedict is the creator of the egg dish that bears his name) is the restaurant across from my hotel.  It serves the traditional red and a green (spinach, broccoli, peas and zucchini) Shakshuka. I have mine with green tea, mint and lemon. After long hours in airports and planes this meal refreshes me.

Israel also has great microbrews and wine. I’m a Dancing Camel fan when it comes to a cold brew and the red wines never disappoint, especially the Syrah from the Golan Heights and Tal Pelters Pinot Noir.

I cannot leave a discussion of the Israeli kitchen without a nod to the coffee. Israelis are very particular about it and since I am a coffee snob, drinking coffee here is a simple pleasure. Offices and homes boast seriously serious espresso machines and freshly roasted beans.

Israel’s food tells the story of its culture.

Israeli Cookbooks and the Israeli Kitchen 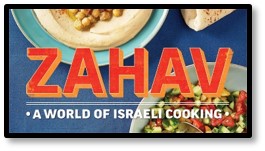 I have my favorites. Michael Solmonov is my newly discovered Israeli cuisine guru and chef. His book, Zahav: A World of Israeli Cooking, was recommended by my company president’s wife, (the subject of my unabashed envy) currently attending culinary school in Boston. She is an amazing cook and I’ve had the good fortune to be a guest at her table.

My go-to for delicious and think-outside-the-box recipes is Yotam Ottolenghi, who has six cookbooks to his credit. His latest, Sweet, will be released in September and I am tempted to pre-order it. His cookbooks are largely vegetarian and, while not too complicated, the recipes require an investment of time and ingredients.

A Story Told Through Food

Michael is also the chef/guide of the documentary film In Search of Israeli Cuisine, a portrait of the Israeli people, telling their story through the history of their food. There is no better way to discover a centuries-old culinary history unless you come to Israel and experience the Israeli kitchen for yourself.