A few weeks ago my husband and I were talking about the secondary education our daughters are pursuing. One dreams of working for Disney in the field of studio animation. For her, only a college of art and design will do. She believes the school must reflect the programs and street cred demanded by this profession. This cred has a starting point of $42K per year.

The other has chosen an education major with plans to become a double language teach in English and Spanish. Her options included a selection of outstanding state schools with strong education programs and tuition starting in the $20K range.

Both girls have opportunities for scholarships but a $160K undergraduate degree, even one offset by financial aid, is still a boatload of debt. Where is the return on this investment and what does it prepare you for? That discussion led us to ask if what they (and we) will pay for their education will be worth the cost. We wondered out loud if the debt incurred will ever offset their career paths, earning potential and job satisfaction. “You should blog about this,” my husband said.

So, is college worth the cost? I immediately think, “No, it isn’t. “ But then I think, “It might be.” This is a topic deep and wide. There is no right answer or singular conclusion. As I researched it, I realized how subjective it is. Where a person goes to college, what they study and how much they pay for their degree makes a big difference in how this question gets answered. 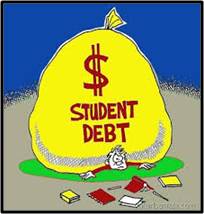 An Educated Man Will Never be Poor

That old proverb has run its course. For some college graduates, their bachelor’s degree will never be worth what they paid for it. This harsh truth contradicts the general assumption that college will bring a better life and a bigger paycheck to everyone who gets a degree. College is only getting harder to afford, even as employers say it becomes more necessary.

In 2010, about 30 percent of adults over age 25 had a bachelor’s degree, up from 26 percent 10 years earlier. But a degree doesn’t buy what it did in years past. In today’s job market, your majors matter. Engineering, math, technology and science are better financial bet than, say, art or education, which are among the majors offering the lowest return on investment. So the question for our daughters becomes: Do you follow the money or follow your passion?

Let’s cut to the chase. Colleges want you to show them the money. Cumulative student loan debt in the U.S. is now over $1 trillion. Seven in 10 college seniors (71%) who graduated last year had student loan debt, with an average of $29,400 per borrower. Many schools reflect much higher numbers. Two of them are in our own back yard.

Wheelock College in Boston is on the high end of the student-debt spectrum. Eighty-two percent of the class of 2012 took out loans. Those who borrowed carried an average debt of $49,500. Graduates from Anna Maria College in Paxton, Massachusetts, were not far behind, borrowing an average of $49,200.

That is a lot of debt at any age but a high school graduate has to weigh this against earnings potential. How can anyone realistically weigh those options when they are between the ages of 18 and 21? At that age, nobody looks farther than the weekend, yet for those choosing college, the repayment period will be counted in decades.

If your aspirations lead to medical school your debt will be three to four times higher. The average for 2012 graduates was $170,000, including loans for undergraduate studies. That compares with an average of $13,469 in 1978. And don’t forget the interest. Student loans have interest and over time that amount racks up. Interest rates range from the low threes to the high sixes and repayment comes six months after you hang that degree on the wall—whether you are working or not.

In his book Academically Adrift, Richard Arum supports my conclusion that for many people colleges are no longer worth the cost. He states that 36 percent of college students show no significant gains in learning over the course of their four years in college. Here’s a shocking statistic: 68 percent of students at public colleges and universities fail to graduate in four years. In 2012, over 50 percent of graduates under the age of 25 were either unemployed or underemployed. It is a harsh critique of higher education.

Yet many high schools and families believe a higher-education degree is no longer optional—it’s a must have. President Obama, in his 2012 State of the Union address, called college an economic imperative. I wonder if he looked at the stats?

The amount of total student loan debt has soared in the past decade, increasing from $240 billion at the start of 2003 to nearly $1 trillion today. I struggled with billion and confess I don’t even know what trillion looks like. The financial model for obtaining higher education is overwhelming. Tuition costs show no signs of slowing and the number of student and parent borrowers continues to grow. It should surprise no one that in 2011, statistics indicated one in five families are currently paying off student debt. 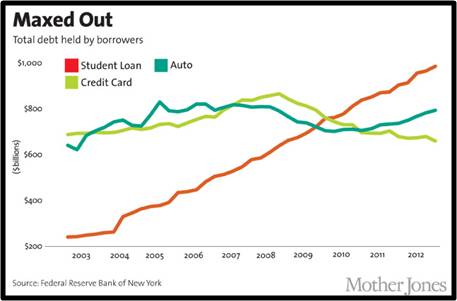 Over the past 25 years the price of college has increased in absolute dollars by 1,120 percent, higher than any other good or service in the U.S. economy. College debt has outstripped car loans and credit cards as the largest source of personal debt. To put it in perspective, health care rose 600 percent, and housing a mere 375 percent. When do you decide the cost of your education outweighs the benefit? 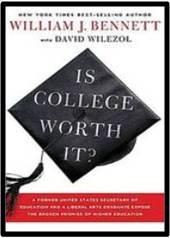 In his book Is College Worth It? Author William Bennett claims that by the year 2018 there will be 14 million well-paying available jobs which will require more than a high school diploma but less than a college degree. This book takes a realistic look at what is possible with and without the addition of four more years of education. Bennett offers a number of worthy options for consideration, all with good return on their investment.

So we’re back where we started.  Does the financial cost justify going to college?  In the end, it depends on what you want to do with your life.

A college degree does not guarantee a job. The first question potential and current college students must ask is:  Do the financial costs, employment opportunities and other factors justify the exorbitant amount of money need to acquire the degree?  The second question they need to ask is:  Will I have the ability to repay the loans?

I believe that for some the answer will still be yes.   But for or a surprising number of people, it will be no.

Related Post: Majoring in Life: You Want Fries with That?