I haven’t been writing much about movies lately but that doesn’t mean we haven’t been going to see them. We just haven’t gone to the theater as much because reviews haven’t been great. Here is a 5-movie scoreboard with my brief opinions on the movies we have seen since the last movie update in approximate order of how good they are. First, though, check out their Tomatometer scores on Rotten Tomatoes 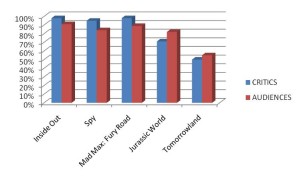 This movie is excellent on every level. We saw it minus kids or grandkids, as did many other adults in the audience. On one level @PixarInsideOut is engaging, beautifully illustrated and animated, well “acted” and engrossing. On another level, is provides a clear layman’s explanation of how the brain and our emotions work. On a third level, it provides adults with a metaphor for talking to children about their emotions and getting them to understand why they feel they way they do: “I think Anger is running things at Headquarters today. Do you know why he took over the controls?”

With great reviews from the critics as well as audiences, this is going to be a blockbuster for Disney Pixar.

It’s funny. OK, it’s really funny. This is the first time I’ve gotten my husband to watch a movie with Melissa McCarthy (he walked out of Bridesmaids and refused to consider The Heat) and he enjoyed it. Like Inside Out, @Spythemovie works on several levels. With an excellent cast of actors who are clearly having a good time, it does a great job of sending up the spy movie as a genre. 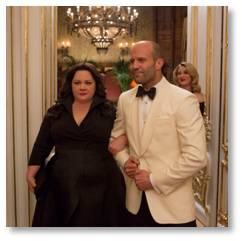 It also pokes sly fun at the way men think and act—in regard to women, other men, their jobs, and their egos—without making them look ridiculous. And it demonstrates, for once, that you don’t have to be anorexic, gorgeous, and well built to be smart, competent, skillful, and good at what you do. You also don’t have to wear a cat suit, a plunging neckline, or ridiculous high heels (see Jurassic World) to have a heroine who can hold the audience’s attention—and bring in box-office profits.

The only reason I considered watching this after seeing the hyper-violent trailer multiple times is that the critics said it was a feminist movie. Which it is. Sort of. After a while. First, however, we get to suffer through a high-speed, high-decibel, high-test(osterone) road race and demolition derby that goes on, well, forever. When this extended sequence finally ended and the story, such as it is, began, I literally took a deep breath. I shouldn’t have bothered. Fury Road doesn’t spend much time on story and the plot is as simple as you would expect in a film about a society run by and for marginally socialized brutes with anger management issues. 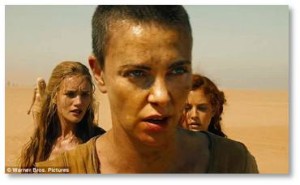 Imperator Furiosa with the sister wives

When Charlize Theron takes over the screen as Imperator Furiosa, however, @MadMax4FuryRioad picks up speed in a good way. Unlike most female leads Furiosa gets to wear clothes and has a shaved head but only one arm.

She is not Hollywood’s typical idea of a female action hero. Still, she can out-think, out-drive, and out-survive most of the men who are after her for (Spoiler Alert) liberating the gorgeous, full-figured and much abused women of the leader’s harem. Eventually she learns that it’s not good enough to run away from your problems: you have to turn and face them and thus defeat the demons. Also, that sisterhood is powerful.

Before then, however, we have to endure endless miles of dusty chase scenes, a loud score punctuated by big drums, men screaming, howling and fighting, and mend demonstrating pretty much every male display behavior but chest pounding. I would have enjoyed it more had there been more of a story and less action.

Like the park, @JurassicWorld_ hopes that a bigger badder, dinosaur will pump up the profits on an aging franchise. The result is not so much. There’s lots of action, much of which depends on the antics of two kids who are more interested in rebelling than thinking and a villain who refuses to give the dinos credit for being dangerous. Some of it’s fun, particularly Chris Pratt’s performance as the Raptor Whisperer, but a lot of it is a tedious rework of previous Jurassic films. 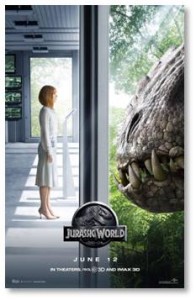 Claire with her infamous heels

Much has been made of Bryce Dallas Howard running full speed from a Tyrannosaurus Rex (pretty much the only way to run with a T-Rex on your tail) and it is both funny and ridiculous. Most women know that running in heels would be impossible because they would snap off a normal shoe after only a few steps. Stilettos may be expensive but that doesn’t mean they’ll hold up under this kind of pounding. April Ferry and Daniel Orlandi must have done a heck of a job reinforcing those shoes.

On a related note, the holograms of dinosaurs in the park’s visitor center made me think that they might be a good way to replace zoos. Holograms would allow people to see animals in their real size, true habitat and authentic behaviors without needing to keep the real beasts in prison cells. Cheaper, too. I’m just saying.

This is one of those movies where the trailer looked great but the finished product was a big disappointment. Despite the presence of George Clooney, @Tomorrowland is really a kid’s film that doesn’t make it to the status of Young Adult. It is, I am sorry to report, just silly from start to finish.

When it comes to movies, the only thing that really counts is how much money they make. Here’s how these five films are doing so far in terms of return on the studios’ investments: