We went to see two of the 13 science fiction movies in the second half of 2017 with mixed results. Both The Dark Tower and Valerian and the City of a Thousand Planets haat possibilities but they went in very different directions.

This movie, based on a comic book series, had a lot going for it:

But it squandered those assets and left us with a hugely disappointing film. Why?

The simple answer: as is often the case with science fiction movies, the real star is CGI and special effects. If Hollywood should have learned one thing from past debacles, it’s that special effects alone can’t carry the movie. They should support good acting, a strong script, and riveting story and sound science.

“Valerian and the City of a Thousand Planets” offered none of those things. 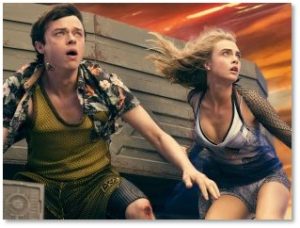 The two lead “actors,” Dane DeHaan and Cara DeLevingne give us exactly the performances you’d expect from two very young people whose talent stops at their pretty faces.

Youth is no bar to good acting, as a then-unknown Jennifer Lawrence showed us in the superb Winter’s Bone. These two leads walked through their roles, however, giving us no reason to care about them, their mission, their problems, or their lives. Just believing that they are crack agents trusted by real adults to carry out important missions stretched my credulity.

The relationship between them had no spark and no interest. M. Besson seemed to be shooting for Humphrey Bogart-Katharine Hepburn  in The African Queen or Han Solo-Princess Leia in Star Wars but his callow leads were simply not up to the challenge. he wisecracks lacked wit and turned them into stupid teenagers you wouldn’t trust with the family car.

Plagiarism and the Movie of a Thousand Thefts

The plot lacked coherence and consisted largely of chase scenes thorough gorgeous backdrops and one or the other of the leads getting him- or herself out of a tight situation. The movie held so many references to other films that I started counting them as it went on: Star Wars, Buffy the Vampire Slayer, Avatar, Star Trek, Silent Running.It should have been called, “Plagiarism and the Movie of a Thousand Thefts.”

The less said about what passes for science, the better. The bad science kept throwing me out of the film. My favorite scene is one where a soldier stands above a huge space and reports that all he can see is a “big hole,” which we know was caused by a ship bursting through the side of the city. Well, a big hole in an orbital city equals a hull breach and that results in everything being sucked into the vacuum of space—objects, people, oxygen, etc. So why is the soldier just standing there without a helmet and looking calmly at the hull breach?

Bad, bad, bad. Valerian earned its 51% Rotten score: I would have ranked it much lower. To date, it’s earned $36,137,260 on its ginormous production budget. As millions get sucked through that hull breach, it’s likely to go down as one of Hollywood’s big disasters.

I do not recommend watching this movie on any screen, regardless of size.

Full disclosure: I am a big fan of Stephen King’s Gunslinger series and have read all seven of the novels. I was looking forward to seeing “The Gunslinger” on the big screen and, in that, I was not disappointed. The movie gets Midworld right. 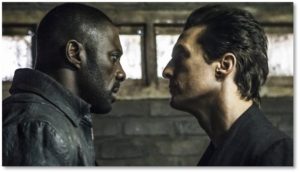 Idris Elba and Matthew McConaughey in The Dark Tower

I also know that the critics hated The Dark Tower, giving it a measly 18% Fresh. Audiences enjoyed it a lot more, though, with a 62% Liked. When I see that big a discrepancy in the Tomatometer scores, I know something else is at work.  That something, in my opinion, lies in the difference between critics who have seen only this one film and fans who know the whole story and view the movie as Step One. Plus, they are usually Mundanes who just don’t understand science fiction and fantasy.

In her New York Times review, Manohla Dargis is unabashedly snarky and far more interested in her clever prose than anything else. You can practically hear her giggling over each nasty phrase. Of course, she wouldn’t have known that part of the fun was catching references to other Stephen King books in either Midworld or Keystone Earth.

Matthew O’Sullivan in his Washington Post review, criticized the movie for not being scary enough. What he doesn’t get is that the Gunslinger series is not horror like the new version of “It” being released next month. If you expect a slasher film in the Old West, or a demonic possession anywhere, you’ll be disappointed. That’s not what this movie is about.

The Man in Beige

On the other hand, reviewers who criticized Matthew McConaughey’s performance as The Man in Black got it right. Mr. McConaughey can carry off a lot of roles but “Scary Villain” is not one of them. He comes across instead as a bored Metrosexual amusing himself by killing people with a casual aside or the lift of a finger. He might as well be wearing beige.

In today’s Wall Street Journal, Ellen Gamerman discourses on “What Makes an Actor Look Like a Bad Guy.” I wish that Director Nikolaj Arcel had read this before he started filming. Putting Mr. McConaughey in a vaguely Edwardian black suit and darkening his hair just doesn’t cut it.

The financials look a lot better for The Dark Tower, however.  A more reasonable production budget–$66 million—means an easier time getting to profitability, especially if fans of the series ignore the critical onslaught.

I do wish, however, that the Gunslinger books had been turned into a Cable TV series like Game of Thrones or Big Little Lies. That would have given The Dark Tower a lot more time to play out the story and, possibly, a more threatening villain than we got on the big screen. It would also have given Roland, the Gunslinger, more time to get over his moody alienation and get back into the dramatic saddle (so to speak) of chasing The Man in Black. (There are no horses.)

While I was disappointed in the Dark Tower’s insipid Man in Black, I did get a good Roland the Gunslinger in Idris Elba. I hope to see more of him. Whether the grosses on this movie will get us to “The Drawing of the Three” is a tossup, however.

If you have been looking forward to The Dark Tower, go see it, by all means. On the other hand, my husband has read none of the books and he liked it. Just don’t believe the critics. They wouldn’t believe Jake Chambers, either.