In less than a month New England has been buried by three consecutive storms that dropped over 70 inches of snow in the area. No sooner had we dug out of one than another came barreling in and tried to outdo the one before it.  I live on a hill about 30 miles west of Boston and we have gotten some of the heaviest accumulations. If the snow from the first two storms hadn’t settled some before the third one hit, the accumulation would be up to my chest.

We don’t have to shovel our driveway or front walk—the condo maintenance crew does that—but we have kept a path out to the bird feeder outside the sun room so I can top it off and I have shoveled paths that give access to the areas where ice dams have formed on the roof.  With each storm, we have had to shovel higher, throwing the shovelfuls of snow up to head height.

The retaining wall behind our house has disappeared. The surface of the snow is smooth and unmarked by the animal tracks I saw last year. One lonely bunny made his way through the snow after the second storm, his tracks blurred by where his tummy dragged in the snow. The usual deer, turkey, and coyote tracks are absent. Of course I’m not filling the small bird feeder that’s in the trees close to the stone wall because I would need snowshoes for that. So there’s no food up there to attract them. 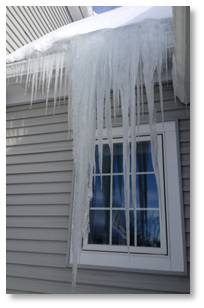 Ice dam and icicles outside the kitchen window

Ice dams are a significant problem everywhere. They form when the bottom layer of snow on the roof melts from the heat in the house and runs to the edge. There the water freezes because the edge is colder than the roof itself. More snowmelt then backs up behind the ice dam and looks for a way out. Sometimes that way is uphill, under the shingles, and then down into your house.  Having water drip down the walls or through a growing wet spot in the ceiling is a very special kind of winter misery.

We have been raking the snow out from behind the ice dams that formed on our roof so no water has come inside. After knocking down the bigger icicles I stuck them in the snowbank out by the driveway light, creating a free-form ice sculpture. They pick up the light at night and glow in the dark like our own Fortress of Solitude.

As I drive the snowy roads, however, I pass houses where the owners have done nothing to remove snow from the roofs. Some houses have icicles six feet long, often more, and they look like crystalline stalactites. They are beautiful but they are also dangerous. In addition to the ice dams they form, these icicles are heavy. I removed one yesterday that was a foot in diameter at the base and felt like it weighed about 10 pounds when I carried it to the ice sculpture.  This much weight hanging down can pull a gutter right off the roof or pull down part of the roof itself. And when this happens, it’s not pretty. Pieces of the siding and underlying structure of the house can tear off with it.

At the very worst, roofs collapse under the weight of the snow and ice piled on them. This is happening, mostly with flat roofs, all around the area and we see them on the TV news.This is the reason why flat roofs are not a good idea in New England. 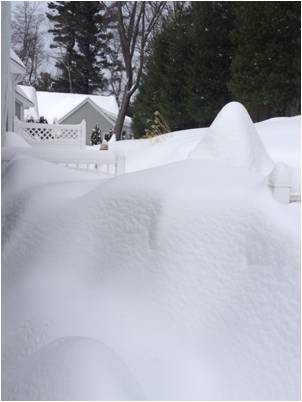 The deck and back yard

Our ancestors, who settled this area during the Little Ice Age, knew this and built houses with steeply pitched roofs. In the twentieth century, however, there has been a tendency to build as though we live in California. But, hey, we don’t get 72 degree days in February here in Massachusetts—not even with global warming.

It’s time to stop the snow but Massachusetts is sitting right smack in the middle of a storm track that’s still going strong. Today it’s snowing from Boston down to the South Coast. This is ocean-effect snow as the fetch—an easterly wind blowing over open ocean—picks up moisture from the Atlantic and drops it on land. Fortunately we’re too far inland to be hit with that. Still, another storm is coming in tomorrow night and another one follows that on Sunday night.

I’m glad that we kept the snow shovels and the roof rake when we moved. It’s better to stay on top of a situation than to just sit tight and hope for the best. I’d rather be outside shoveling and raking so I can stay be safe and warm when I come in.

Note: For readers in warmer climes, a roof rake is a flat blade mounted on a long pole that comes with extensions so you can reach way up high.You stand on the ground and use it to pull the snow off the edge of the roof. It helps to stand back a way so the snow doesn’t fall right on you.