In my previous posts about the Silver Tsunami and the Silver Ceiling, I have talked about the rapidly growing problem caused by companies eliminating older workers just as the big wave of Baby Boomers is hitting their senior years. The evidence for this is overwhelming. Just look at Susan Sipprelle’s Over Fifty and Out of Work website and you’ll see. 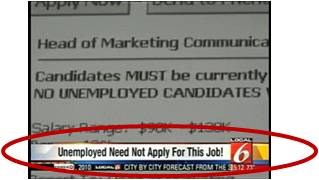 Although the unemployment rate for workers over 50 is not significantly greater than that of workers in general ( a statistic that amazes me), people 50+ have a much more difficult time finding new work and stay unemployed significantly longer. The longer one is out of work, of course, the less likely one is to find a new job. Some companies have even put out the “Unemployed Need Not Apply” sign, dismissing this group as losers unworthy of their consideration.The Huffington Post calls unemployment over 50 a “national crisis” and I think they’re right. Waiting for help from anyone is not going to help, however. Neither state nor federal governments really want to acknowledge the problem because it means they might have to do something about it and they don’t have a clue—much less an inclination. After all, they think that the eligibility age for unemployment should rise because we’re all healthier than previous generations and able to work longer. We’re able and willing, certainly, but that doesn’t matter if one can’t get hired.That means it’s up to the individual to come up with his or her own survival plan. In the next few posts, I will address some strategies and tactics that I have gleaned for a variety of sources and some that come from my own experience. The first, and most important, one is this:  Face Reality.

If you are an unemployed person over 50 and you are looking for the next step up in your career, a position that will pay you at least as much as your last job and possibly more, you are cruising for a bruising (a phrase Baby Boomers will remember). Those days are gone, along with your career, your prospects and perhaps your retirement. The goal is to not let the problem take your house, your savings, and your self esteem. This may not what you had planned on and it’s certainly not what you want but it is reality today.Yes, you’re angry. The years of hard work and dedication that you put in have been rewarded with a pink slip and, if you’re lucky, some level of severance pay. At the same time, the executives at your company and others are making huge salaries and boasting about how they improved the bottom line—by getting rid of you. It’s not fair and it’s not ethical. But it is legal.Yes, you’re depressed. Your job was your identity. You took pride in your work and your success. You identified with your profession and the company you worked for; they helped to define who you were. Now you think of yourself as nobody special. It’s hard to get up every morning and face that computer and phone, knowing that you have another slow, humiliating day ahead of asking for friends to help you and looking for someone to (please!) hire you.Yes, you’re worried. You had planned on this job to carry you through to retirement. You have a house, a mortgage, and family responsibilities. Unemployment helps but it can only pay a fraction of your monthly expenses. You don’t know how you’re going to pay all those bills without drawing down the savings that you put away for golden years that now seem unattainable.It’s easy to hunker down, hide in the house, sink into a black mood and do nothing. But the best thing you can do is get over it and move on. Accept that unfairness as reality and something you cannot change. Understand that the outrage, the anger, the fear, (oh, heck, the sheer terror) is real but also that it will not help you. Don’t waste time asking the government for help but it’s not going to happen. The faster you do this, the faster you’ll get back on your feet in some way.But what to do? How does one move on when companies aren’t willing to hire you?The important thing is to do something. It’s tempting to collect unemployment and pound away at the job search every day. This is what career counselors, networking meetings, buddy groups, executive outplacement firms and other experts will tell you to do. And it probably makes sense for the first four to six months. Treat finding a job as if it is your job and spend at least five hours a day on the process. I’m not going into detail on how to do this as there are many government resources and websites to help you out. 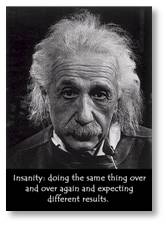 After that time, however, your prospects drop precipitously so changing your approach makes sense. Remember that Albert Einstein famously defined insanity as “doing the same thing over and over again and expecting different results.” If what you’ve been doing hasn’t worked so far, then get flexible and try—or add—something new. Some standard ideas are:

I’ll talk about some of these in more detail this week. In the meantime, remember that opportunities don’t always come with clear labels or blinking neon signs. Sometimes they’re disguised in ways that are difficult to see if you think in terms of the career you had instead of the work you can be doing. Keep your eyes open and stay flexible.