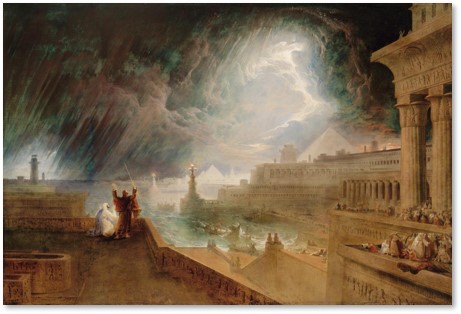 For the first time, ordinary people could see into a hitherto unknown past, learning about sights and a culture they found fascinating and exotic. At about the same time, Jean-François Champollion discovered the Rosetta Stone, which enabled translation of hieroglyphic writing. These two events sparked great interest in Egyptian art and culture throughout Europe and America. The Egyptian Revival style appeared in architecture, clothing, jewelry, furniture, and interior design.

The major motifs of Egyptian Revival include obelisks, pyramids, hieroglyphs, the sphinx, scarabs, lotus blossoms gods and goddesses. In terms of architecture, look for these Egyptian Revival elements:

I planned to describe a list of sites and objects in this post but, as usual, it grew too large for just one piece. I decided to break it up into two sections. So, here is the first post, which deals with Egyptian Revival monuments to the dead in two notable cemeteries. You can find some spectacular pyramid tombs in North America but we have other Egyptian Revival elements around Boston. 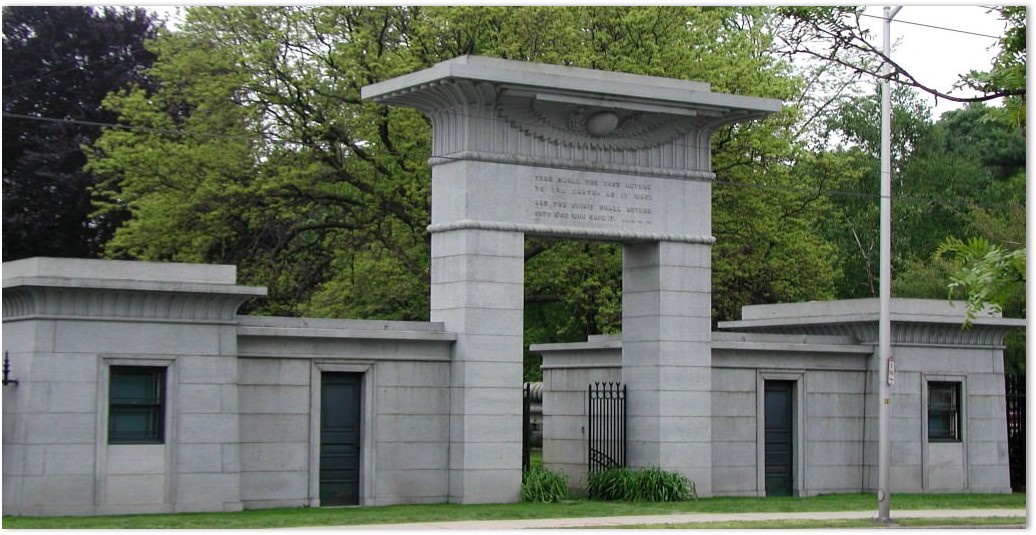 At 25 feet high and 60 feet long the Mount Auburn gateway was the first, fully created, Egyptian Revival structure in the United States and still impresses the visitor today. On the center of the cornice we see a winged ball in deep relief with drooping lotus blossoms on either side. The ball symbolizes the Egyptian Sun God, Ra but on Victorian gravestones it represents the power than can recreate. The wings on either side give it the meaning, “God, Lord over all, creator.” 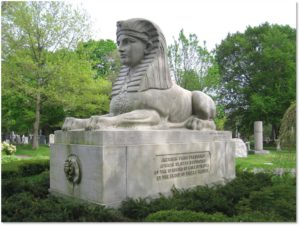 The Bigelow Sphinx: Once inside Mount Auburn Cemetery, one can easily discover the giant granite Bigelow Sphinx. Just walk straight ahead and look uphill toward the Bigelow Chapel. 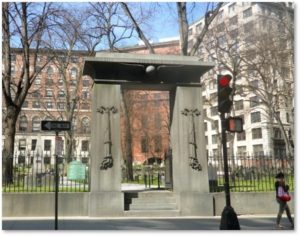 Blocky Egyptian Revival pylons mark the corners of Old Granary. The front of each bears the Victorian image of a winged hourglass,. which represents the swift flight of time. Mr. Rogers also used pylons in the Jewish Touro Cemetery but these are plain, lacking the hourglass motif. 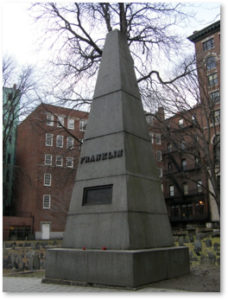 Although buried in Philadelphia, Mr. Franklin was born in Boston on January 17, 1706, the tenth son of soap maker, Josiah Franklin and his second wife, Abiah Folger. After raising 13 children and seven grandchildren during their 55-year marriage, the couple passed on and were buried in Old Granary.

This granite monument replaced a brick one that Benjamin, their youngest son, erected in 1757 before he left for England. Constructed of stone taken from the same quarry as the Bunker Hill Monument, The Franklin monument anchors Old Granary with its solid presence.