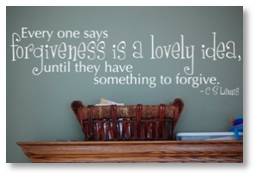 Everybody needs to forgive somebody.  The problem is, forgiveness is hard; perhaps that’s why it’s so underrated.  Don’t get me wrong – I know it’s important but it’s one of those things that make people in my family uncomfortable. Rather than stepping up, we are much more comfortable listing the wrongs that have been done so we can keep track of them. The choice between forgiveness and doing nothing often prompts the easy path – we do nothing.  fter all, it wasn’t my fault.  he other person, hereafter referred to as the offending party, has complete ownership for whatever it is that can’t be forgiven.

I come from a long line of grudge holders. It’s not one of our more attractive family legacies and we have elevated it to an art form. Throughout my extended family we have the remarkable ability to remember every wrong ever done, when it was done, by whom and – this is the most important part – whose fault it is. We keep this internal list on us at all times and occasionally take it out and relive it, making us feel even more wronged, or in the case of my family, more right.

We have taken holding a grudge to new heights. The grudge torch has passed from one generation to the next, embellishing and enlarging the wrongdoing until it bears no resemblance to the original offense. We take a lot of pride in this, especially in the retelling. My great aunts kept emotional scorecards; a great way to track offenses in case you needed to pull to pull one up at a moment’s notice. They provided material for reliving the transgression and calling out the offending party, which served to further exonerate anyone else’s role in the story. A lot of emotion has been invested in these grudges, and the poison they created trickled into new generations of the family tree. I could feel myself being sucked in.

Over time the lists grew. It’s important to note that in my family it’s almost always a one-sided list. The offending party’s crimes are long and detailed while the wronged one has an amazingly short list of like-minded injustices. Nothing ever approaches the magnitude of the offending party’s crimes and keeping a list diminishes any other infractions, assumed or otherwise, for the wronged one. It is easy to become preoccupied with wrongs done and even easier to overlook the wrongs done to others.

My cousin and I decided to explore the origins of this legacy with a heartfelt attempt at ending it. We had been indoctrinated into it through our great aunts, our mothers and their sisters (it’s a chick thing) and watched it spread throughout the family. We realized these age-old grudges and wounds had become so personal that to let them go would leave an immense void. If everyone set aside their anger and hurt and tried to move forward what would they be left with? The hoped-for answer was a fresh start, but that is not so easily done when there are generations of inherited grudges. At least not in my family.

It began with my maternal grandparents. There were a lot of sisters in the mix and not all of them were in their right minds. They suffered from things not easily diagnosed or treated back then: depression, bi-polar disorder, even alcoholism.  None of these are excuses, but without treatment they contributed to the grudges and fueled the emotions that kept them alive.

It began with misunderstandings and harsh words. Assumptions were made, lines were drawn and sides were taken. These real and imagined offenses accumulated over the years and were passed to their children and then to their children’s children. If two sisters weren’t speaking, then neither were their children. I am one of the children. I could feel the resentment and bitterness expand into my life. I saw it take root in my mother, and then in one of my sisters. The lines became rigid and the silences permanent.

One of the loonier aunts (well into her eighties and a committed grudge holder) writes letters. She sends them to her sisters, their husbands, and occasionally to one of us. She maliciously points out flaws, lists offenses, passes out blame and ends with absolution for herself. Now the letters are returned unopened, so she sends postcards –insuring they will be read – with one-liners like “Frankly my dear, I don’t give a damn.”  These days we are more amused than offended by her antics but they point to a deeper set of issues and the inability to let go.

I was young when I became aware of our talent to magnify and hold a grudge. I realized some of my relatives didn’t speak to each other and took every opportunity to speak badly about each other. It was as if our extended family had become Israel and Palestine. Our families were fractured. There would be no Camp David; peace was not an option.

Requests for details about how it all started produced vague answers. The stories I heard seemed out of synch with such rigid unwillingness to mend fences. I tried to find the origin of the offenses but no clear history emerged – perhaps because no one even remembered what they were.

One day, while driving home from a visit with my Dad, I expressed my frustration with his determination to do things his own way to my son, who had accompanied me on the trip. 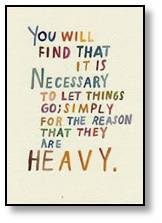 My impatience, admittedly misplaced, was with my Dad’s resistance to a time frame I had mentally set for something to happen and when it did not I couldn’t stop voicing my irritation. My son said “ya gotta let this one go mom; it’s just too heavy to be dragging around.”  Wisdom from my child.  Wisdom, I realized, we could apply to those family grudges.

My cousin and I realized the source of these grudges no longer mattered. What matters are what we – this new generation — do with them.  Most grudges, especially the ones in my family, are too old to hold onto and way too heavy to carry.  We decided to reach out to extended family with a plea to let go, offering an olive branch and a sincere desire to rebuild family relationships.

We suggested spending time and energy on happier things, reconnecting and moving on. My cousin offered her lakeside summer home. It was a stretch to hope for complete buy-in but many relatives embraced this suggestion and thanked us for taking the first steps. We re-discovered the amazing people in our family and had so much to celebrate. Over the past few years we have met often, gotten to know each other again and released the legacy of grudges and hurt feelings.  It’s important to note that not everyone answered. Three women vehemently rejected the idea, indicating no quarter would be given. One of them was my sister. 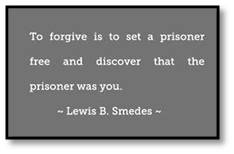 Forgiveness is always a two-way street and receiving it can be just as hard as bestowing it – perhaps harder. Forgiveness doesn’t mean you forget the transgressions; it means you have the ability to move past them. In reaching out to our families we realized that forgiveness — both given and received — does not have to be accepted to be effective. It is the act that empowered us to let go, heal and move on. It was unrealistic to hope for 100% acceptance of our invitation but by extending it we were able to move forward.

I have come to think of forgiveness as something I do for myself more than a gift to someone else. I felt my sister’s rejection deeply, but in time was able to accept it. I miss her, and am finding my way through the sadness left in the void. I am determined to bear no grudges.

My family has taught me that we should all become students of forgiveness and create a life that does not stockpile other people’s wrongdoing or trap us in a list of our own. When genuinely motivated, forgiveness — extended and received – can change things, but mostly it changes you.

Two ex-prisoners of war are talking.  One of them says to the other, “Have you been able to forgive your captors?” The second one says “No, and I never will.”  The first one replies, “Then they still have you in prison, don’t they?”