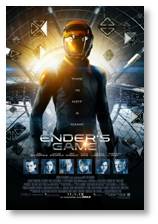 I am pleased to relate that the movie version of Ender’s Game is a significant improvement on the 1985 novel by Orson Scott Card, however I admit that I was never a big fan of Mr. Card’s writing style. Having slogged through the first of the Ender books, I read two more but then gave up because of his heavy reliance on dialog and minimal use of action. Frankly, he buried some very interesting ideas in a writing style that I found too tedious to warrant my time.

But Ender’s Game is a science fiction icon and Harrison Ford is in the movie so off we went to see it in a plain old theater—no 3D or IMAX. Director Gavin Hood, who also wrote the screenplay, has done an excellent job of excising the novel’s endless dialog and dreary political discourse, condensing them into nuggets of relevant information.

Yes, the characters tend to be stereotypes, as Ian Buckwalter pointed out in his NPR review, “Everything at Stake, and Everything on the Table.” Men are mean and promote violence. Women are empathetic and concerned with feelings. But I disagree with critics like @WSJ’s Joe Morgenstern who complained that there’s too much training and not enough action. For some of us, watching a character grow and develop constitutes action, as does seeing how well he deals with a group’s hostile alpha males. Adrenalin is not always required.

The Issue of Leadership

The biggest issue for me in @EndersGameMovie, however, is that of leadership. Throughout the movie, Col. Hyrum Graff, played by Harrison Ford, is supposedly training young Ender Wiggin to be a leader. Wiggin is to be the “the one,” a martial messiah who will save earth from a return invasion of the insectile alien Formics. (The book calls them buggers but this term was probably discarded as not politically correct.) Col. Graff’s methods, however, seem to confuse the training required for a leader with that designed to create a stone-cold killer. One might argue that the earth of the story requires a killer to orchestrate the “final battle” that will eliminate the Formics as a threat forever. 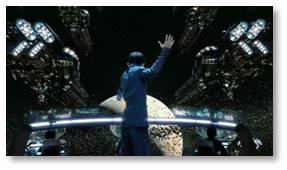 But killers and leaders are not the same thing, you see, and one should not confuse the two either in the training required or the results achieved.

To that end, Col. Graff (who looks as hang-dog as McGruff) subjects his supposed protégé to a brutal curriculum that combines classroom training with isolation and bullying. He states that he wants Ender to feel like he never has anyone’s support, then sets him up for harassment and retribution while separating him from any friends. How, I wonder, does that create a leader?

What Makes a Leader?

True leaders are inspirational and motivational—for better or worse—taking their followers to new heights, greater achievements or bigger victories because they make the followers want to go there. True leaders demonstrate by their example that much can be accomplished if only one dares. They challenge their followers to be greater than they ever imagined and then show the way to greatness.

Leaders can command troops, launch companies, establish movements, create family dynasties, build political organizations or even found whole countries. They may be good men or bad, charismatic or brutal. They may put their followers in harm’s way; get them to embrace poverty and deprivation, or promise them fame and riches. But they don’t accomplish anything by isolating and abusing their followers.

Mr. Card’s hard-line Battle School might actually create leaders because it’s difficult and challenging but for most the students it’s not any more brutal than Hogwarts School of Witchcraft and Wizardry, or a nineteenth-century English boarding school for that matter. For Ender Wiggin, though, it’s different because Col. Graff makes sure it’s different—and much worse. Graff’s agenda is divided between the goal he wants to achieve and the methods he thinks will bring that goal about. It’s like watching Dumbledore mentor Harry Potter by turning all of Gryffindor House against him.

Abuse is Not Training

Once at a science fiction convention I heard a speaker make an interesting comment on Mr.

Card’s writing. He said that a characteristic of child abuse is the knowledge that: 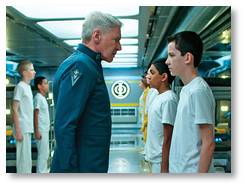 The speaker thought that Mr. Card’s work showed signs of childhood abuse. I’m not qualified to comment on that but I can say that the vision of leadership—and how a leader is created—that is demonstrated in Ender’s Game is not one that is embraced by any management training class that I know of or even military boot camp. The military recognizes that, in combat situations, you depend on your fellow soldiers or team members to watch your back, or “cover your six.” A leader who is hated by his followers is more likely to get fragged than followed, and a dead officer doesn’t win battles.

Ender Wiggin does gather followers around him but he does it despite Col. Graff’s abuse, not because of it. He is “the one” not because he’s a wad of malleable clay that Graff can mold but because he already has leadership within him. What Col. Graff wants to create is Darth Vader—a psychopathic killer who can execute genocide in the cause of world, or galactic, domination. If Darth Vader had gone to Battle School instead of training to be a Jedi Knight, his transition to villainy would have been easier to understand.

In her @NYT review, “And a Child Shall Lead Them Into Space Battle,” Manohla Dargis says that, “while he’s an appealing presence, little Ender can’t help feeling like a pint-size psycho.” No surprise there. After all, abuse creates psychos. The wonder is not that Ender succeeds but that he survives the training with his sense of decency and morality tattered but intact.

If you like science fiction movies or enjoyed the book, by all means go see Ender’s Game. We enjoyed it. But don’t expect to see a vision of how leaders are made because this movie is deeply divided in that regard. Ender and his team succeed in creating “a great disturbance in the Force” but I left the theater feeling somewhat squidgy about the adult guidance that got them there.

NOTE: To see a more engaging–and funny–take on the theme of boys being trained to fight aliens, watch 1984’s The Last Starfighter with Robert Preston, Lance Guest and a very young Wil Wheaton.  It’s the only movie in which you will ever hear someone utter the phrase, “gung-ho iguana.”