Usually when I write one of these posts, I try to find something that has gone missing from the City of Boston. Today I report on three prominent Bostonians — Roman goddesses all — that went missing but were found and returned to a place of honor. Once they graced the old Horticultural Hall. Later moved and abandoned, they were finally recovered and restored. 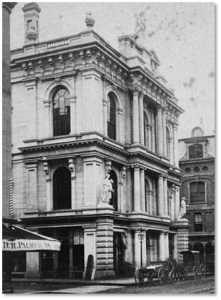 The second incarnation of Horticultural Hall (after a Greek Revival structure at 40 School Street) housed the Massachusetts Horticultural Society for 36 years. This three-story, white granite building stood on Tremont Street between Bromfield Street and Montgomery Place. Designed by Gridley J. Fox Bryant and Arthur D. Gilman, the elaborate French Second Empire structure sported a different style of column on each floor and urns on the roof.

Stores occupied the first floor, which had Doric columns. Their rents provided a source of revenue for the society. The second floor, with Ionic columns, housed the Society’s Library Room. This contained over 4,000 volumes and pamphlets on horticulture and gardens—arguably the most valuable collection of horticultural works in the country at the time. The third floor, behind Corinthian columns, held a large hall that the society used for exhibitions, concerts, and entertainments of the “better class.” 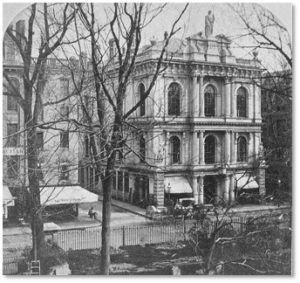 Looking down on Old Granary

Sculpted by Martin Milmore with the financial support of Benjamin Pierce Cheney, they embodied the horticultural theme.

At the top of the roof, standing in the center of a broken pediment, stood Ceres, goddess of agriculture, grain, crops, fertility, and motherly relationships. At 13 feet high, she was the tallest of the three figures.

Two smaller statues, at eight feet high, occupied plinths on either side of the second floor: Flora, goddess of flowering plants, and Pomona, goddess of fruit trees, gardens, and orchards.

Read more about Martin Milmore in my posts on “Martin Milmore and the Angel of Death” and “Boston’s Soldiers and Sailors Monument.”

The three divinities held their places on Tremont Street, looking down at Old Granary Burying Ground, from 1865 until 1901.

New Digs in the New Land

By 1899 the neighborhood along Tremont Street had changed, becoming more commercial with increasing streetcar traffic. The society ‘s members also complained that the hall’s rooms were small and inconvenient. I suspect, however, that they simply wanted to move their headquarters to the newer and more fashionable area of the New Land, or Back Bay. And why not? Many other prestigious organizations had made the move and raised modern and impressive structures. 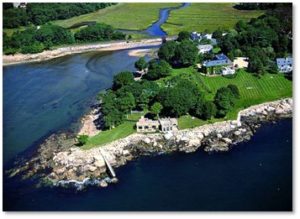 The old ornate building was demolished but someone, thankfully, preserved the statues. At least for a while. They were removed to Seahome, the summer estate of the society’s president, Albert C. Burrage in Manchester by the Sea. That caravan of trucks or wagons must have presented quite a sight as the three marble goddesses made their ponderous progression to a second location.

Moving to the Gardens at Elm Bank

The ladies resided in their North Shore home for nearly a century until it became the Glen Urquhart School in 1977. At some point, a Philistine chucked the statues into a swamp. (Shame on the man who committed this desecration.) Brackish water eroded their arms and heads over many years and the goddesses were in poor condition when a search, prompted by an article in the Boston Globe, discovered them. Only the torsos remained.

The goddesses were restored in the mid-1990s with a gift from Mass Hort trustee Jeanne Leszcynski and her friend Diane DiCarlo. Their faces were used as models for the new heads. The marble statues then came to their third home in the Gardens at Elm Bank. Here the Massachusetts Horticultural Society leased a 36-acre portion of the Elm Bank Reservation along the Charles River in Dover, MA from the Metropolitan District Commission. The estate had formerly been owned by Benjamin Pierce Cheney and, later, his daughter Alice Steele Cheney Baltzell.

The statues now stand at the edge of an Italianate garden designed by Frederick Law Omsted for the Cheney Baltzell house behind them. The restored goddesses were dedicated on September 16, 2002—137 years after the dedication of the Horticultural Hall on Tremont and Bromfield. 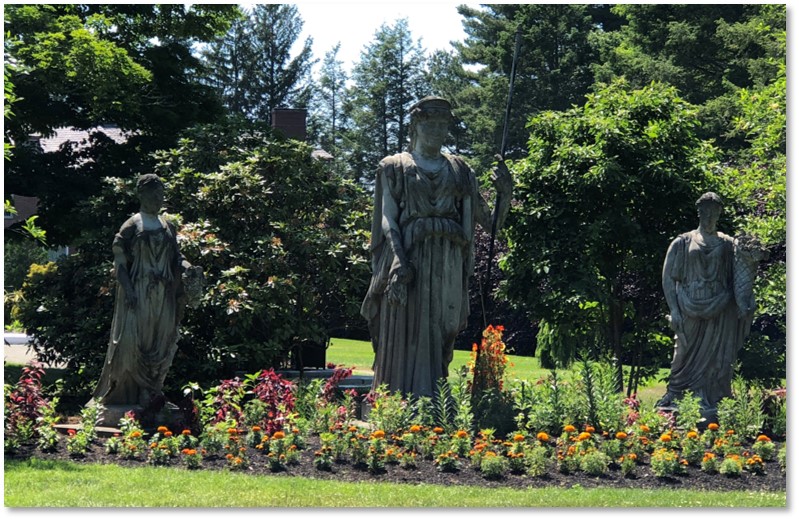 The three goddesses at Elm Bank

Because Martin Milmore designed the sculptures to be seen by people standing on the ground looking up, he foreshortened them. That means they have odd proportions when viewed straight on, with huge feet, stumpy legs, and unevenly sized torsos. The trio presides over their very own stretch of lawn, called the Goddess Garden.

Thus, these three of Boston’s Missing returned to us and can be seen again. Summer is a perfect time of year to visit Ceres, Flora and Pomona in their third and, we hope, final home in Wellesley. The gardens are glorious and you can spend a cool morning or a wonderful afternoon wandering the grounds.

You will find directions to Elm Bank on their web site. General admission is $10.

P.S. I sometimes think that Bostonians do a better job of preserving advertising signs than we do the cultural and artistic treasures of previous centuries. I like the Citgo Sign as much as any card-carrying member of Red Sox Nation but I wish that we paid the same attention to statues and paintings that were the work of talented artists. Imagine the screams if anyone threw the Citgo Sign into a swamp. A that’s just an oil company advertisement.