“The Broadcast Circle” was published in
Ghosts: An Anthology of Horror from the Beyond,
edited by David Tyson, May 2015

What better time to put up another ghost story than Halloween? I actually based this one on some of my own experiences—minus the dead people. 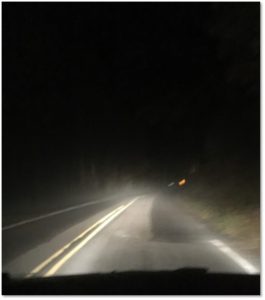 “The Broadcast Circle” got started when I read a Stephen King short story called “Big Driver,” which was published in his anthology, Full Dark, No Stars. The story was well written and compelling, as all Mr. King’s stories are, but I didn’t like it. I found the premise strained and unbelievable. Even worse, “Big Driver” ended without tying up all the loose ends.

But I did like the location—a deserted country road at night—so I began putting my own characters into this setting. Then I had them, especially the female protagonist, act in ways that I thought more realistic.

So, read “The Broadcast Circle” as a Halloween treat with no calories. Tell me what you think, especially if you also read “Big Driver.” Here’s the beginning:

“I was driving fast down the twisty back road, trying to get home before midnight, when the woman ran out of the darkening woods and into my headlights. Abandoning the gridlocked highway, I’d taken an impulsive shortcut onto this narrow road and was driving much faster than its twists and turns would allow.

The high beams gave me only a flash impression—an instantaneous image. She was dark-skinned but washed out, like in a black and white photo. Under a mop of wet dreadlocks, her eyes were wide with shock, her mouth open in a scream—or a cry for help. Her white shirt clung to her arms and chest. Staring straight at me, the woman raised both hands to ward off the impact.

I hit her while standing on the brakes.”