You may have experienced psoriasis or know someone who suffered through it. Like the gift that keeps on giving, psoriasis never goes away; it subsides for a while until something triggers another outbreak. Like any medical condition, however, most people want to know more about it if they’ve got it.

Psoriasis is a chronic skin ailment. When it flares up, the patches, which can appear anywhere on the body, range in severity from a few itchy spots to bleeding lesions. Eeeew! It also hurts. Personally, mine comes on during the cold, dry winter months, but it can occur any time of year. About 75% of sufferers get their first outbreak before age 40. 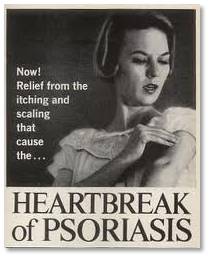 Most doctors, whether internists, GPs, dermatologists, or rheumatologists, answer this question with words like “autoimmune,” “hereditary,” maybe even “arthritis.” The accepted description of what occurs during an outbreak is this: A three-fold increase in the growth of epidermis cells. Normally, it takes 28 days for an epidermis cell to move from a lower skin area to the epidermis, at which point it matures and is sloughed off normally. Psoriasis cells, which never mature, make this journey in eight days. The result is a rapid buildup of skin cells in patches because they literally have nowhere to go.

These concepts are all around the ball in that they can all affect the manifestations of psoriasis. However, none of them gets to the root cause of this disease: about 95% of the time it’s leaky gut. In a nutshell, leaky gut occurs when undigested foods reach the small intestine. Normally, the small intestine’s lining is an impermeable layer of cells, If, however, bacteria grow in the undigested food and find an opening or weakness in that lining, they are free to roam the entire system. You could come down with athlete’s foot or a strep throat, never thinking that the root causes lay in your eating habits and your gut. This is the point at which the inquiry becomes more interesting, although also more complex. 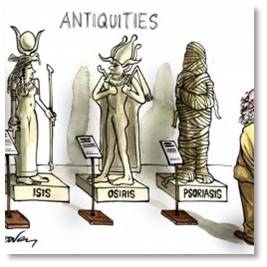 Other conditions may have their roots in leaky gut as well: arthritis, colitis, IBD, celiac, migraine, and many others (I shall present more information on these topics in subsequent posts). In fact, you may have read recently that researchers have started to look at each individual flora in the gut (there are about 1,500 different ones). Each constituent of the biome performs a specific function. Each person contains a unique biome, although most people in different regions of the world have many commonalities.

Eventually, perhaps within 10 years, doctors may be able to treat each person as an individual, rather than as a digit falling in between a prescribed macro-range; e.g., “Oh, Ms. Jones, the acceptable range is from 1.4 to 3.6. Your level is 2.2, so you are within the limits,” which translates into, “You are okay.” “But, doctor, I still feel sick.” You could probably write the rest of this conversation yourselves. However, I digress, Back to psoriasis.

Triggers and Symptoms of Psoriasis

Many factors, either singly or in concert, can trigger a psoriasis episode: Stress, illness, injury, poison ivy, infections, overuse of alcohol, Nsaids, and others. Psoriasis is also linked to arthritis in psoriatic arthritis.

No one knows for sure what causes psoriasis (even the case for leaky gut is not universally accepted), hence the use of the word “idiopathic,” which means “of unknown origin.” Any time you see that on your medical record, it means the doc is saying, “I dunno.”

There are clues, though, and one of them is how the body uses fat. People who eat low-fat diets in other countries don’t get psoriasis. Scientists also implicate the immune system, about which I shall write more another time, and unhealthy colons (think about all the colon-cleansing products you’ve seen advertised) as possible culprits. Or, some of them. Or, all of them.

There Are Things You Can Do 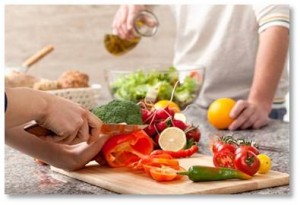 Your doc can prescribe lots of drugs, but when I say the word “methotrexate,” you will understand that many of these drugs cause unwanted side effects. Specific herbs can also relieve symptoms, but even these come with qualifiers; e.g., “Do not use barberry, coptis, goldenseal, or Oregon grape root if you are pregnant or have gallbladder disease.” It gets more granular as it goes.

You can make dietary changes that should help.

Bathing the sores in sea water can help relieve the discomfort. Coconut oil works to relieve dry skin and flaking. An Epsom salts bath could be refreshing. However, a milk bath, a la Mae West, not so much.