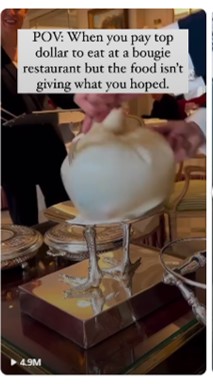 The English language is a wonderfully flexible thing.  English speakers add words, change words, alter meanings, eliminate syllables, and incorporate names from other languages. What a word meant generations ago might not even come close to what it means today. And words that we take for granted today might well not have existed when our grandparents were young.

Yet we still communicate and understand one another. Sometimes it can be difficult to keep up, though. You hear a new word for the first time and it sticks out as unusual. Then you begin hearing it more often and the references grow until it is in common usage.

Such a word is “bougie.”

Going Back to the Bourgeoisie

Now, the origin of bougie is not new at all. It comes from the nineteenth-century French word bourgeois.

Bourgeois began in the 19th century as a term that defined a new thing—the middle class created by manufacturing. It added a Gallic soupçon of condescension akin to that implied by nouveau riche. The French middle class, as depicted in novels like “Madame Bovary” by Gustave Flaubert epitomized bourgeois behavior. As explained in “15 Classic French Novels You Need to Read” on What’s Hot:

“The lead character, Madame Bovary, is a woman who always wants more – she’s read too many French romance novels and has an idealised vision of what her life and marriage will be like.

She’s constantly striving for a higher social status, for grand romantic gestures, for beautiful objects and more. She hopes that this is what her marriage to Charles Bovary will give her but he falls flat of expectations and consequently so does her life.”

I have read “Madame Bovary”—twice actually. It gave me an understanding of how the middle class disdained by wealthy snobs was constantly striving to move up while remaining safely within the acceptable boundaries of behavior. It is not a happy novel.

Bougie with a Difference

That takes us to the current American usage of “bougie”; a word with a difference. (Also spelled boujee and bougee.) 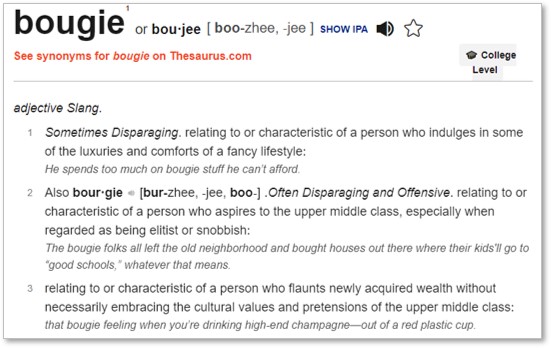 So, you see, the sniff of disdain and the looking-down-one’s-nose connotations are still there. Bougie has, however, acquired a touch of humor in its new incarnation.

“Today, caviar served casually, approachably, is everywhere. Look for it on the ‘bougie fish sticks’ at Dear Jane’s in Los Angeles, dotting ice cream at Miss River in New Orleans, and mounded on fists as ‘caviar bumps’ to accompany Martinis at too many places around the country to name here.” – The Wall Street Journal 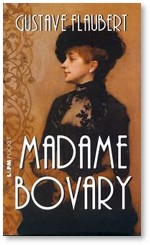 “For those of us who get excited by style, it can’t hurt to feel some sense of chic along the way. Of course, there are way more important things in parental life than metallic Tevas and Mansur Gavriel, but for me, with two young children in different schools, a partner who is often away, and a full-time job that can feel all-consuming, if a stupid bougie, tie-dye sweatsuit is going to help me endure, then bring on the Aviator Nation.”
– The New York Times

“With our ever-changing world, my clients are searching for ways to bring entertainment back to their homes,” said Kellie Burke, principal of Kellie Burke Interiors. In response, Burke has been turning ‘underutilized spaces that we fill with nonsensical furnishings’ into adult rooms with ‘bougie atmospheres.’” – The Boston Globe

“L.A.’s bougiest gym will take your money and leave you begging for more.” – LA Times 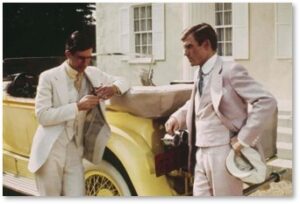 As you can see, there’s a hint of self-aware, tongue-in-cheek acknowledgement of people wanting to parade their (probably new) affluence without really understanding how truly affluent people live and consume. That holds a risk.

“If you’ve got it, Baby, flaunt it! Flaunt it!” may have worked for Producer Max Bialystock but it might not work for thee or me. Because bougie is all about being ostentatious, it just may mark you as nouveau riche. Bougie has more to do with Jay Gatsby than Emma Bovary. Think of Gatsby flaunting his veritable rainbow of cashmere sweaters at Nick Carraway.

Knowing What to Look For 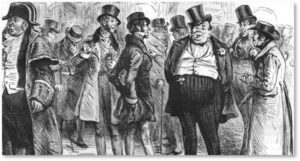 If you hear the word now, though, you know what to look for and can analyze the meaning. Is the reference snide or humorous? Does it make you feel like you’re in on the joke or does it cast aspersions on you as a social climber? Should you be happy or offended?

Just be careful how you use it and you should be okay. Just stay away from those bougie fish sticks.