Skip to primary content
As I listen to conversations, whether in the real world or on TV, ’ hear young people who drop words and phrases without any understanding of what they really mean or where they come from. Words progress over time, changing meanings and usage and becoming more or less respectable. Lacking perspective, kids think the words are new or mean only what their generation understands them to mean.

The first time I really paid attention to this dynamic—well before the release of The Big Lebowski—the term was “dude.”  My American Heritage Dictionary defines it as, “An Easterner or city person who vacations on a Western ranch.” Those of us who grew up with TV programming that was dominated by westerns, however, knew that “dude” was not a title you wanted attached to you. It meant a greenhorn from “back east” who either was afraid of horses or thought you posted when trotting with a Western saddle.

Real cowboys found dudes to be objects of scorn and derision. Today, dude has become a synonym for “man,” as in, “hey, man,” and every man is a dude.

Several years ago I worked in a company with a group of young interns. We went out to the car on our way out to lunch when one of them said, “I call shotgun.” Amused, I asked him if he knew where that expression came from.  He shrugged and said no, so I offered four gold stars for whoever could explain the meaning of the expression. Three stars went to the young man who said it was the partner who wasn’t driving in a police car. While that wasn’t the historical explanation, it did draw on his generation’s experience of a TV dominated by police dramas. 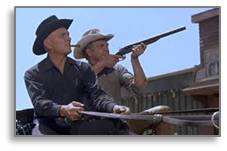 In the Old West, stagecoaches often carried valuables like payrolls as well as passengers with money and jewelry, which made them ideal targets for robbery, known as a stickup. The driver rode up top and the security guard rode next to him—carrying a shotgun. The position next to the driver became known as “the shotgun seat.” The expression carried over from one generation to the next and from horse-drawn carriages to horse-powered vehicles.

I directed my young friends to watch The Magnificent Seven, a terrific movie in which Steve McQueen rides shotgun while Yul Brynner drives a hearse up to Boot Hill.  Why did someone have to provide security for a hearse on its way to the cemetery?  Watch the movie and you’ll find out. You’ll also get to hear the killer score by Elmer Bernstein and watch some great performances by Hollywood’s original tough guys.

The expression I hear most often today is “douchebag” along with its shortened version, “douche.” As in, “He’s a douche.”  When I was young, no one spoke this word in public it was so offensive. My dictionary does not include it and even Wikipedia does not give a detailed explanation, saying only, “A device used to administer a douche; A pejorative term for an arrogant or obnoxious person.” In French, the original language, douche means only, “to shower;” and there’s nothing pejorative about that. No one would ever say, “He’s a shower.”  The nasty part comes from the portion of the anatomy being cleansed.  I won’t explain it for you. To discover the real meaning, and see what a douchebag really looks like, click here.  When I hear the term used everywhere from the mall to the TV, I wonder how many of the people using it know what it really means. Probably no one. 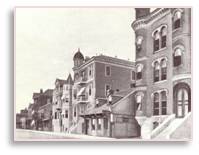 It does not surprise me, though. In America there is a natural progression of words from swears and obscenities to general usage. The original meaning falls away, is lost, or becomes obscured. Decades later people are astonished to learn that the word was ever a vulgarity at all.A good example of that progression is the word, “jazz.” While we know it today as a respected style of music, jazz originally meant sex, particularly in regard to the brothels of New Orleans’s Storyville district. While “red hot jazz” didn’t originally refer to music, jazz music was played in the front parlor while the customers waited to go upstairs. As the music became more popular, both it and the term found their way out of the jazz houses and into polite society. The circle closed and the progression was complete.

We have seen that progression with other vulgar terms and I’m sure the process will continue. English is a very flexible language that incorporates and adapts words from a variety of sources. Just recognize the progression and don’t get outraged by it. After all, yesterday’s vulgarity will likely become your grandchildren’s common word. Even if it starts with F.