Mother Nature hit Florida with a curveball on September 28th with Hurricane Ian, carving a path of destruction across the state. It arrived with a vengeance not seen since 1929, making landfall as a Category 4 storm, eventually reaching Ctegory 5 in the target zones. 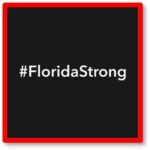 Ian also went through an eyewall replacement cycle, meaning the storm spiral contracts under pressure until it collapses, allowing dry air to push in and weaken or dissolve it. In Ian’s case, the opposite happened.

The eyewall expanded, extending the reach of the severe winds at its core to 35 miles. Ian grew by 50% and delivered the third highest storm surge since 1913 to coastal Florida.

For perspective, only four Category 5 hurricanes have made landfall since 1885. The hard part for Florida is just beginning, facing the aftermath of Ian and the long road to recovery.

Hurricanes By the Numbers

According to the National Oceanic and Atmospheric Administration, The Labor Day Hurricane of 1929 is the strongest hurricane to hit America, with winds reaching 200 mph. Ian’s landfall recorded sustained winds of 155 miles an hour.

Our home is in Lee County, the bullseye in the storm’s target. Predictions for Ian’s severity began as a worst-case scenario for Florida until the worst case became reality.

To date, 123 people are dead: with 61 in Lee County. There were 2500 rescues, 13 million power outages, and hundreds of boats ripped from their moorings.

The force of the storm took out the power grid and the generator at the main water pumping station. A 7.2-foot storm surge broke the previous record of 3.36, and some reports went as high as 15 feet.

Bridges and causeways to the barrier islands collapsed and some areas will not have internet restored until 2023.

Insurance claims from Hurricane Ian now total 431,702 with nearly $474 million in losses. Final numbers are expected to be between $60 and $70 billion.

In Florida, it is very difficult to obtain insurance for a mobile home, and owners and renters without it rely on FEMA.

Because of their length and tendency to occur in groups, hurricanes receive individual names to ensure precision in observation and monitoring,

It is also the small print rider on many homeowner insurance policies. Coastal states may impose deductibles on homeowners’ insurance policies for damage specifically caused by hurricanes. Set at a fixed dollar amount or more commonly a percentage of the property’s insured value, it is as low as 1% and as high as 10%.

This means the policyholder assumes the cost for losses resulting from a named storm, up to the designated percentage, before receiving any insurance payout. Hurricanes like Ian place huge financial burdens on those personally responsible for remediating losses.

Friends and neighbors continue to wait for insurance companies to come back with a dollar figure. Compensation is delayed and expected to be significantly lower than the cost of repairs. Residents are hiring independent adjustors to advocate for higher payouts. 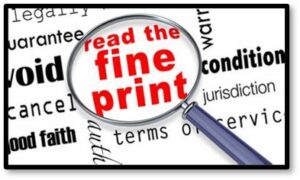 According to the Insurance Services Office, losses due to hurricanes between 1994 and 2013 came to $159 billion.

Hurricane Andrew (1992) was a reality check for the insurance industry when losses hit levels far higher than previous storms. The $41 billion payout from 2005’s Hurricane Katrina reinforced this view, causing companies to revise the terms of their policies.

Ian began around 10 am on the 28th, building speed and hitting full velocity around 4 pm. We aren’t in an evacuation zone (though many did leave) but did barricade ourselves inside our home with hurricane shutters.  Once the shutters are in place, the only way out is through the side door in the garage. 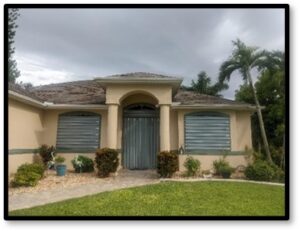 The Fortress of Solitude

We lost power around 1:00 p.m. but maintained communication with neighbors via a text group and families outside of Florida updated us on the trajectory.

My husband removed one metal bar from a shutter on the back of our house and we watched the destruction of our home and neighbors’ homes in real time.

There are no words to describe the shock or the sound of howling wind and metal beams crumbling. It continued throughout the night, ending around 4:00 a.m.

The Landscape from Hell

The next morning, neighbors gathered outside in our pajamas, staring at the destruction around us—the walking dead on an Armageddon movie set.

Our roof is gone, along with lighting and landscaping. We recently completed a redesign of our outdoor living space and watched the hurricane destroy it.

Everyone on our street lost roofs, pool cages, landscaping, lighting, fences, and trees. Debris covers streets and yards as far as our eyes can see. It remains on front lawns; local removal companies cannot pick it up as it involves a national disaster.

2022 remains a year of challenges. Watching my sister slide deeper into the abyss of Alzheimer’s, a torn rotator cuff, my father’s interment at Arlington in June, and my mother’s this November kind of feels like a pile on—too many things; all too difficult to manage.

Hurricane Ian puts this into perspective. Our house is standing, we are standing, and while our damage is extensive, it is fixable. Some people lost everything — homes, businesses, cars, boats, furniture, pets, and jobs. They have nothing left and nowhere to go.

The neighborhood is a sea of blue tarps, and every curb is piled high with rotting vegetation, metal, plastic, bent screens, fencing, and outdoor furniture.

The day following the hurricane we offered our generator to charge devices.  Another neighbor volunteered his gas grill as part of a community dinner effort.  Food at risk for spoiling was cooked and shared.

One neighbor brought us a case of water, while two others helped my husband pull our newly built lanai cage up and out of our pool. People worked side by side hauling debris to the curbs.

Our community is in shock, bent but not broken. We’re going to need a minute. People ask if we’re sorry we moved here, and the answer is no. Before we relocated, we did our research, and this hurricane is unprecedented. 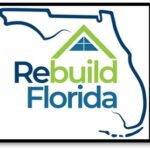 We are heartbroken but also angry, frustrated, depressed, and fearful. We can’t unsee what happened. The damage is visceral. Friends ask how we are doing and the truth is sometimes we don’t know.

We’re doing the best we can, finding a new normal in the upheaval and devastation of a hurricane. We have each other and all of us are pilgrims on a journey.

Our best life is still here, and our challenge is to find grace in the place we are standing right now and embrace it.