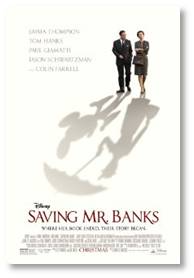 I wasn’t quite sure what to think about a movie about how Walt Disney made a movie from the Mary Poppins children’s books written by P.L Travers. It could so easily have been a saccharine feel-good flick with all the depth and intellectual impact of It’s a Small World. The other option was a kid’s movie with big-eyed, wasp-waisted women in princess gowns singing to small cheerful animals. Fortunately, Saving Mr. Banks bears no resemblance to either.

Instead it is a thoughtful movie for grownups and older kids about how Walt Disney persuaded a cranky, difficult, and demanding woman to let go of a creation so important to her very being that she needed to defend it in order to protect herself.

The Assumption of Normality

The story takes place in the early Sixties, a time when introspection was not in vogue and people were assumed to be pretty much normal unless they demonstrated an obvious physical or mental deficiency. Surely a woman who had (at the time) written five wildly popular children’s books about a magical nanny who arrives via flying umbrella to take charge of a family in dire need of structure would be normal. In fact, she might be greater than mere “normal,” an extraordinary woman of creativity, perseverance and accomplishment.

So, despite the fact that it took Mr. Disney 20 years to lure P.L. Travers to Los Angeles to work with his creative team, everyone met her with the expectation that she was normal. Alas, she was not. The temptation with this story, as with other movies based on real people, is to diagnose a behavior that was unknown at the time. I spent the first 20 minutes thinking that Mrs. Travers was somewhere on the Asperger’s spectrum but the flashbacks to her childhood disabused me of that notion. One does not develop Asperger’s Syndrome in adulthood after being a fairly ordinary kid. Therein lies the drama.

It shows us, step by step, flashback by flashback, what happened to P.L. Travers that (A) inspired her to create the character of Mary Poppins and (B) molded her into the difficult woman she was in 1962. The other, and even more fascinating part of the story, is how the Disney team worked hard (but cheerfully) to win her over, acceding to her unreasonable demands, struggling to overcome obstacles she created, providing her with the abstemious diet she preferred, and taping every single creative session so that she would have a record of their agreements. A stroke of genius comes during the credits when they play one of the actual tapes recorded during their sessions so the audience can hear for themselves that the movie did not exaggerate. 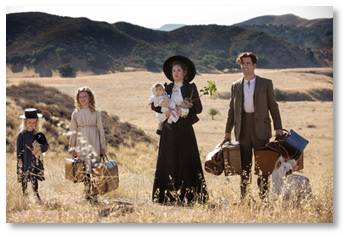 And who would have thought that this most British of children’s books had its origins in the Australian outback? The Banks family may have lived at Number 17 Cherry Tree Lane in London but P.L. Travers grew up on the other side of the world in Queensland and New South Wales.

I typically have a lot of difficulty with stories about adults who refuse to grow up and who—even worse—behave like their children. They either live in a fantasy world—avoiding the real-life necessities of feeding, clothing and protecting their families—or they throw adult responsibilities on their own kids. I confess to being judgmental about this and having no patience with them, either on-screen or in life.

I have known adult children of alcoholics and they tend to fall into one of two patterns. The first is to be flighty and irresponsible; trying to live out as grownups the childhood they were denied. The second is to become very controlling, compelled to manage every aspect of their lives and the lives of those around them to ensure that nothing so awful ever happens to them again. Mrs. Travers clearly fell into the latter camp. But the Disney team, unaware of her difficult childhood, did not know this.

Emma Thompson, Tom Hanks and, especially, Colin Farrell deliver excellent performances. Also to be commended is the catering crew that produced the sugary extravaganzas delivered to the creative team’s rehearsal room, only to be sent away in disgust by Mrs. Travers.

Rotten Tomatoes shows the critics give it an 81% Fresh rating while 90% of viewers liked it. The ones who didn’t found it to be both saccharine and overly sentimental—a spoonful of sugar gone down the wrong way. Somehow, I don’t think they were looking beyond the superficial story to the tragedy of a child’s life twisted by an irresponsible father until she becomes a hyper-controlling and thoroughly unpleasant woman. There is nothing either sweet or sentimental about that.

And what’s wrong with sentiment, anyway?  We live in a country where cynicism, outrage, distrust, and mendacity are daily fare and where entertainment often panders to the basest aspects of the human experience. Some folks must agree with me because Saving Mr. Banks has grossed $59.958,280 on an estimated production budget of $35 million and it will remain in theaters for a few more weeks.

We thoroughly enjoyed Saving Mr. Banks and I recommend it for anyone who wants to see a thoughtful movie about overcoming adversity and the triumph of the human spirit.