While I was writing yesterday’s post on gender discrimination in Silicon Valley, I thought about the times when a man in a work environment has hit on me, used an offensive or belittling term of address, dropped a sexual innuendo, or took language beyond the merely vulgar into the realm of crude and insulting. If I had a dollar for each time it happened, I’d be rich. And those were the times when the behavior was obvious — Mad Men obvious. This in a workplace that’s supposed to be professional and where co-workers are expected to treat one another with respect. 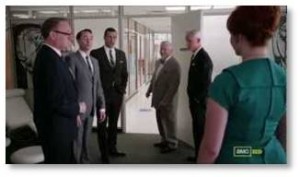 Sometimes the man’s intent is more obscure. You’re not sure if he really meant what he seemed to mean and you don’t know how to respond. This is important because a woman has approximately 20 seconds to come up with a reply that’s light, flip and dismissive without being insulting.

Humor is good for defusing bad situations as long as it’s not at the man’s expense because he’s usually higher in rank than you are and you can’t afford to anger him. Twenty seconds. It’s not easy and the perfect answer is likely to come to you in the middle of the night. Realizing what you should have said when it’s 2:30 a.m. is no help at all.

When It’s Not Just a Sandwich

Here’s an example. When I worked at Chipcom, a networking startup, I was friends with one of the west coast sales managers. He and I had several interests in common that led to chats in the cafeteria about mindfulness in the workplace, the value of meditation, the case for reincarnation, and similar topics that were all more mystical than physical. I enjoyed our friendship and the conversations that went with it and I thought he did, too.

At one point we were both working the same tradeshow—the old Comnet in Washington D.C. It had been a busy day and I worked straight through lunch into early afternoon. When traffic in the booth slowed down I grabbed my handbag and said that I was going to lunch. The sales manager said that he was hungry, too, and we both went to find something to eat. Options were limited around the convention center so we headed to the sports bar in the hotel across the street. Unfortunately, others had the same idea and the line stretched out of the restaurant into the hotel lobby. This was clearly going to take more time than I wanted to spend on lunch. What to do? 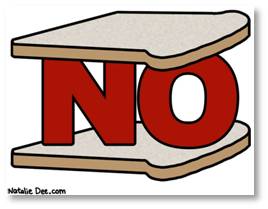 The sales rep said, “Well there’s this little sandwich place around the corner. It’s not very fancy but the food is good.” I replied that I was more interested in eating than ambiance so that sounded fine. Then he added, “Actually, it’s a take-out place; there are no tables. But we could take the sandwiches up to my room and eat there.”

Bada-bing. I froze. In an instant the whole dynamic had changed. What to say? My mind raced.

Five seconds. Had we not been friends, I would have gotten the message instantly but our prior conversations caused me to wonder if he actually meant what he was saying about just eating lunch. Ten seconds. Then I thought that no man invites a woman to his hotel room just to have a sandwich. Fifteen seconds. I remembered people saying of news reports, “Well, what did she think was going to happen when she went to his hotel room?” Eighteen seconds. Not only had he just put me in a very awkward situation, he had betrayed our friendship when I had never given him any reason to think it might be something else. Twenty seconds. I was speechless.

The sales manager jumped into the awkward silence. “But if you don’t want to, we can just wait here,” he said. “Yes, let’s do that,” I replied. The awkward moment was over but so was our easy friendship. Things never went back to the way they had been.

For a long time I was never completely sure I had read the situation correctly. Over the years I have told this story to several people, a couple of whom said that he meant just what he said. But a female VP of Human Resources smiled immediately and said, “Of course he was propositioning you.” 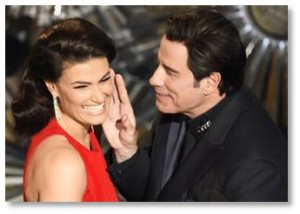 Idina Menzel and John Travolta as the Oscars

A lot of women have similar stories. Sometimes the men get the message and sometimes they persist with unwanted attentions. Sometimes the behavior is flagrant while at others it’s subtle. Regardless, it’s always unprofessional.

Not only does it create a difficult—or hostile—work environment, it always distracts from the work at hand. Always. If a woman has to deal with male invitations it interferes with her focusing on the project in progress, the strategy being discussed, the problem to be solved or the trade show that’s underway. Quite simply, it’s bad for business. There is no place in the business world for men to hit on women yet it happens every day.

The pervasiveness of men behaving badly in the workplace would be obvious if more women like Ellen Pao stood up and said “I’m mad as hell and I’m not going to take it anymore.” Maybe now that she has led the way it will happen. One can only hope.