Since writing about getting Lyme disease back in 2013 I have wondered why no drug company has developed a vaccine for this awful tick-borne illness.  After all, the incidence of Lyme Disease has been increasing year over year. The CDC’s latest data from 2013 indicates that roughly 300,000 new Lyme disease cases happen annually in the US. (One study estimates as many as 440,000 new infections occurred in 2008.) Probably a lot more went undiagnosed or un-reported. About 85,000 Europeans a year are also infected. 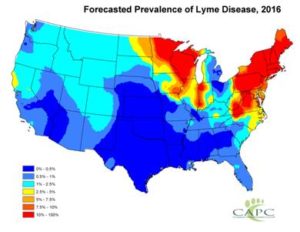 Meanwhile, a new tick-borne bacterial infection, Ehlichiosis, has been discovered in the southeast and Midwest parts of the United States.

To make things worse, experts have predicted that this winter’s low snow levels and early warm weather presage a good year for ticks and a bad year for Lyme Disease.

I think this clearly warrants research into a vaccine that protects people from the diseases carried by this creepy-crawly parasite. After all, veterinaries can vaccinate dogs against Lyme Disease.

Thus it surprised me to learn that a vaccine called  LYMErix™ was developed in 1998 and then pulled off the market in 2002. Wait. What? Why would a drug company withdraw a vaccine when such a huge need for it exists?

Consider all the at-risk people who would benefit from a Lyme Disease vaccine. They include, but are not limited to:

The answer is simple: the vaccine had some adverse side effects and some people claimed it gave them arthritis. These problems received media attention. Tort lawyers started pulling together class-action lawsuits that were backed by anti-vaccine protesters. Facing the threat of lawsuits and bad publicity from science deniers, GlaxoSmithKline withdrew LYMErix from the market.

Result: the vet can vaccinate your dog against Lyme but your doctor cannot protect you.

In the 15 years since LYMErix was withdrawn, Lyme Disease has spread across the country and become almost epidemic. Some people in the categories above have contracted it multiple times.

Many of the accepted “facts” about Lyme Disease are actually myths. For example, only 20% of infected people show a bull’s-eye rash of any kind. I saw only a generalized red rash when I was infected and some people see no rash at all. 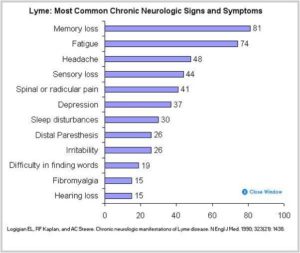 Just in case you are thinking that it’s safer to risk catching Lyme and then curing it with a two-week course of Docycycline, consider that:

Lyme Disease is a bacterial infection that is caused the the spirochete bacterium borrelia burgdorferi. Under the microscope it looks like something out of a horror movie, the invasive growth escaped from a hidden government lab that burrows into your brain and takes over your nervous system. Borrelia wreaks havoc, physically and mentally, on the human body, causing meningitis, encephalitis, joint pain and facial palsy among many, many other problems. Dr. Joseph Burrascano’s list of Lyme symptoms fills two pages.

A lot of people, including celebrities, have been infected and struggled with misdiagnoses—or struggled to have their symptoms believed at all. Dr. Nevena Zubcevik of the Harvard Medical School has written that, with current testing, 69 out of 100 patients who have Lyme disease may go untreated.

The Cost of a Cure

The cost of treating the disease has been estimated at more than $1 billion per year in the US alone, according to one recent study. Besides, the primary treatment, the antibiotic Doxycycline itself has side effects. According to Drugs.com, you should check with your doctor immediately if any of these side effects occur when taking Doxycycline:

And these are just the major side effects.  Drugs.com lists another 34 minor side effects. So the cure can make you miserable. Plus, as we all know, antibiotics become less effective every year.

So it’s better not to contract Lyme Disease at all and that’s where a vaccine comes in.

The good news is that Valneva, a French biotech company, has received FDA permission to start clinical trials along with a green light from the European Union’s Clinical Trial Application. So perhaps we can get a vaccine for Lyme at some point in our lifetimes.