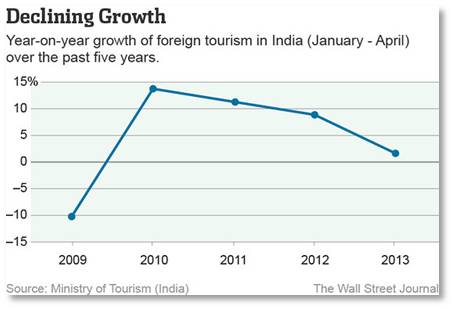 There can be no doubt that violence affects tourism, often in countries where tourism is one of the largest industries. I first wrote about this in When Violence Destroys Tourism. Here are come recent developments.

India is the latest country to experience a decline in its tourism industry due to outbreaks of violence. In this case, it’s violence against women. While awareness of this problem began with the gang-rape last year of a young woman on a bus in Delhi—a woman who later died of her injuries—it has gotten worse since then.

This notoriety has been driven by multiple rapes of female tourists including the gang-rape of a Swiss tourist who was cycling with her husband on the way to the Taj Mahal. The blog posts of Michaela Cross, reported by @CNN, brought home the situation to women in other countries.In “Government Worried for Female Travelers” by Joanna Sugden,” @WSJ reports that the country’s Tourism Ministry is now, finally, admitting problems:

“Tourism statistics suggest that negative news about the safety of women in India has had an unfavourable impact on inflow of foreign tourists in the country. The rate of growth of foreign tourists shrunk to 1.8% in the first four months of 2013, compared to 9% over the same period last year. Although the pace of growth in foreign tourism has been gradually declining since 2009, this represented the steepest fall in the last four years.”

It looks like what began with the global recession has been exacerbated by continued reports of violence against women. Who wants to travel to a country which is, as a British Travel Advisory says, “extremely dangerous for women?” Who wants to spend precious travel money being ogled, groped, masturbated at, attacked, and possibly raped? Who wants to spend a vacation frightened of leaving the hotel? Who wants to return home with PTSD?The Indian Government might not be concerned about the well-being of its own female citizens but money talks and if women boycott travel to India it could get their attention and force change. 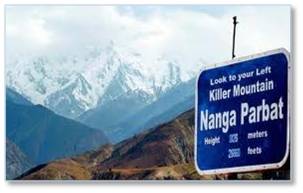 Pakistan has shown that it is taking seriously the murder of 11 climbers and support staff at the Nanga Parbat base camp in June. The Altitude Pakistan blog reports:

“In a major development regarding Nanga Parbat Massacre, Diamir Police has claimed that it reached the hideout of terrorists and arrested around 20 men in a targeted operation, reports Dawn News. The arrests were made with the collaborative efforts of Diamir Police, Pak Army and other law enforcement agencies.”

This is good news for world-class climbers and adventure tourists as well as the poor natives of the Diamir region, who depend on the climbing industry for their livelihoods. With these arrests, the Pakistani government may be protecting a much-needed revenue stream as much as the lives of foreign climbers but their action is a big step in the right direction for everyone.

Euro zone tourists avoided the violence and instability in Egypt this year by traveling instead to Spain, Portugal and Greece. In “Sun, Sand, Prices Buoy ‘Club Med,’” by Ilan Brat and Alkman Granitsas, The Wall Street Journal reports that “Foreign visits to Spain since January have set a record, while Greece and Portugal are enjoying banner years.”This is good news for the economies of the Iberian Peninsula, of course, but particularly so for that of Greece. Turmoil in that country around austerity programs drove tourists away for three years, exacerbating the country’s economic difficulties. Now that things have settled down and fears of “an abrupt exit from the euro zone” have dwindled, tourists are coming back to the sites that have attracted travelers since before the Roman Empire. Interestingly, “labor-market changes” in Greece have driven down payrolls, which reduced hotel rates, making the country even more attractive as a vacation site. I guess that’s the upside of downsizing.These developments should make it obvious to the government of any country that violence is bad for tourism and bad for the economy as well as creating a black eye in terms of its national reputation. I know that this is less than insignificant to a country in the grip of political upheaval, as Egypt has been, but unemployed, hungry people drive revolutions of their own. That’s how the Arab Spring began in Tunisia. Tourism can be the canary in the coal mine of economic distress. And a government ignores the well-being of its own people at its own risk.