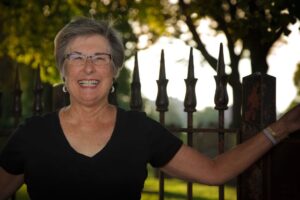 Me outside the Central Burying Ground

Tour guides often hear interesting questions while leading a tour. I love questions and like to hear a lot of them. The best questions come out of left field, frequently from children who see things differently than adults do.

Sometimes, I hope to hear a specific question. If it doesn’t happen, I add in the information anyway.

General Hooker and the State House

One night I stopped in front of the Massachusetts State House while leading a ghost tour for Haunted Boston. At this stop, I talk about the statue of Mary Dyer, a Puritan woman who became a Quaker missionary and was martyred for her faith.

As the group gathered around the closed gate to one of the State House’s main entrances, a woman spoke up. “Um, I don’t mean to be rude, but why does this State House have a Hooker Entrance?? 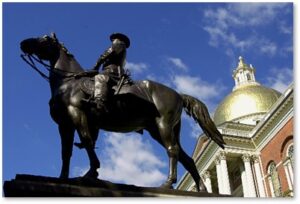 I explained simply that it was named for the equestrian statue of General Joseph Hooker that stands just inside the gate. “Fighting Joe” Hooker was the third general of the Army of the Potomac during the Civil War. Although he talked a fierce game, Gen. Hooker is best known for the defeat of his troops at the Battle of Chancellorsville.

All rumors and anecdotes aside, the hookers my tour guest referred to did not get their  name  from the camp followers in General Hooker’s army. It makes for an interesting story but is, unfortunately, not true.

The statue of Maj. Gen. Hooker stands out because it was sculpted by Daniel Chester French. We know Mr. French best for his statue of Abraham Lincoln in Washington DC’s Lincoln Memorial. Edward C. Potter sculpted the horse.

Prepping for the Quiz

Another night, I led a group through the pouring rain during a real gully-washer of a storm. A bright, perky little boy demonstrated that he had prepared for the tour by doing his own research. Right from the start he leaped in to ask if I was going to talk about a particular thing. 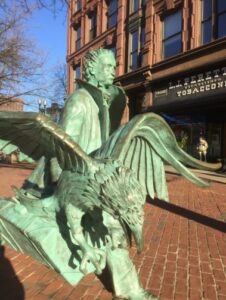 We stopped in Poe Square, by Stephanie Rocknack’s wonderful statue of “Edgar Allan Poe Returning to Boston,” where he was born. The boy immediately contributed the information that Mr. Poe hated Boston and called it “Frogpondium.” I admitted that this was true and was tickled that he knew this piece of literary and historical trivia.

His father, fortunately, switched the boy from dialog into listening mode. Questions make a tour more interesting but continuous interruptions can throw a guide off his or her rhythm. I did (and usually do) make a point of stopping at the Frog Pond on Boston Common to show my groups where Mr. Poe got the name.

Kids also tend to ask questions about what happened next. One night, on a Dark Side of Boston tour for Boston By Foot, I stopped at the bottom of Copp’s Hill Terrace to talk about the Pirate John Quelch. I related the story of how Captain Quelch had led a mutiny, taken a ship out of Marblehead as a privateer and then turned pirate. He stole £10,000 pounds of booty from several Portuguese ships but was arrested on charges of piracy and tried in an Admiralty Court. 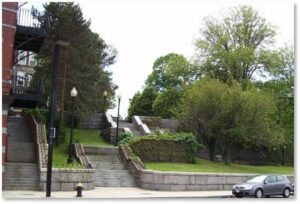 After I had finished describing his last words and execution, a little voice piped up from the tour group. “What happened to the money?”

The town of Boston kept it, using some to pay the lawyers and some to finance other projects in the city. While the adults in my tour group considered the larger story, it took a child to follow the money.

Is Anyone in There?

Kids also like to get into the creepy stuff. Waiting for a ghost tour group to assemble one night, I watched a girl walk up to the iron fence around the Central Burying Ground on Boston Common. Pointing to a chest tomb by the gate, she asked, “Is someone buried inside?” 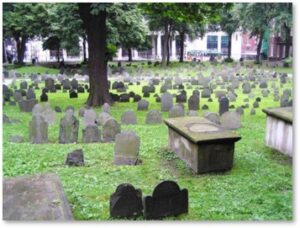 Chest tombs, large, heavy memorial structures, resemble a rectangular box made of stone with a removable lid. The girl wanted to know if this particular tomb was being used as a sarcophagus to hold a body. I reassured her that the coffin had been buried underground and the chest tomb was only an elaborate grave marker.

The kids usually spot the rabbits and squirrels that come out in the evening. Also, the rats. Any city has rats, particularly if people throw food on the ground. (I can’t explain why they do this when there are numerous waste receptacles nearby.) The rats seem to thrive on a diet of pizza crusts and stale fries deposited by passersby. I prefer to focus on the rabbits.

The pandemic kept cruise ships from coming to Boston’s cruiseport this year. I hope that changes by next year because I love giving bus tours of Boston for the cruise ship passengers through Destinations North America.

One day, as we were rolling through Boston, a woman commented to her seatmate, “Oh, it’s a city.” I took that to mean she thought Boston was like Colonial Williamsburg or Plymouth Plantation. She expected to see an historical recreation, complete with costumed occupants shearing sheep and demonstrating old crafts.

The National Park Service tour guides do wear costumes. (I feel sorry for them on hot humid days. The guides for some tours wear both costumes and elaborate makeup. On ghost tours I wear black and carry a lantern.

Comments from Outside the Tour

Commentary sometimes gets lobbed in from outside the group.

One night at the end of a Dark Side tour, I began talking about the Angiulo crime family that lived in Boston’s North End. As I described the FBI’s attempts to plant a bug in their office on Prince Street, a local resident walked by. “You wouldn’t ‘a dared talk about them like that when they wuz alive,” he said. But we did. 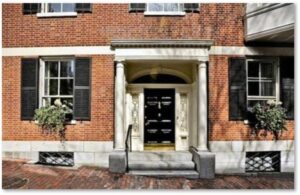 Just recently, I led a group to the corner of Walnut and Chestnut Streets on Beacon Hill. There, I talk about the infamous nineteenth-century Parkman Murder. As I waited for everyone to make their way up the narrow brick sidewalk, the current owner of Dr. Parkman’s house walked down the hill.

He began yelling at me from across Walnut Street. He shouted that he didn’t know why we talked about his house and didn’t want us to do it. While my astonished guests watched he concluded, “I don’t know why you tell people my house is haunted. It’s all bullshit.”

I couldn’t tell at first if he was serious. On a previous night in the same place, I was deep in the story when a man sneaked up behind me and yelled, “Boo!” Okay, I jumped. This was different.

He went inside and I began my spiel. At the end, I concluded, “Please notice I never said his house was haunted.” It broke the tension and they laughed.  But really, when you live in an historic house in an historic neighborhood of an historic city, one shouldn’t object to finding tour groups outside.

Every tour becomes a new performance with a different audience. Some groups listen quietly while others can be quite rowdy. I think the groups with kids are the most fun because kids say the darndest things.

This month and next are, predictably, peak season for ghost tours. The darkness provides a wonderfully spooky atmosphere and I carry a lantern for added color. Before the pandemic, we could run several groups of 30 people every weekend night leading up to Halloween. I don’t know if it will be that busy this year but many people have already signed up for ghost tours in October.

I look forward to leading a private Boston By Foot tour of the Back Bay tour for a group next month. Private groups  usually mean that the guests know one another and that makes for more discussion and—of course—good questions.