The Innovation Design Building is easy to miss because (1) it sits out at the far end of the Seaport and (2) it’s only eight stories high. The wall of glass towers rising between it and the rest of Boston makes it difficult to even notice this very long, very white structure. If we stood it up on one end, however, it would be taller than the Prudential Center. 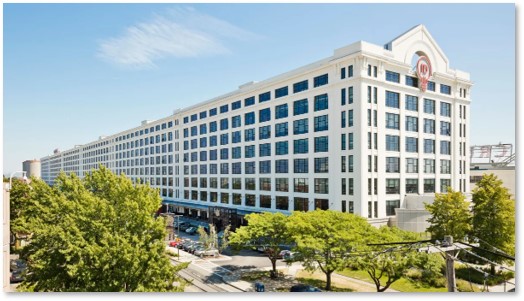 While this repurposed structure lacks the kind of architectural distinction that usually catches my interest, it is more than a century old. Its history starts with war. Over time, however, it changed to become a center for innovation, a home for entrepreneurs, and a design showcase.

The U.S. Department of Defense purchased a large part of the Commonwealth Flats in 1920, and split up the land between the Naval Annex and the South Boston Army Base. The Navy purchased the drydock built by the state and began constructing buildings. This work would continue until World War II with Track 61 providing rail service to the annex. During WWII, the U.S. Navy focused its shipbuilding in Charlestown and ship repair in South Boston.

The Boston Army Supply Base 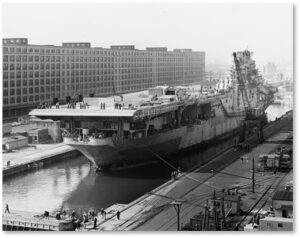 The Army Supply Base with Aircraft Carrier in Drydock
Photo: Jamestown LP

The U.S. Department of Defense, through the Army Corps of Engineers, constructed the supply base on the Commonwealth Flats to serve as a waterside storehouse for the South Boston Army Base. At a third of a mile long, it is one of the longest buildings in Boston.

During World War II, the base was used to warehouse and distribute a wide range of military goods and supplies. It also It served as an induction center, where the Army coordinated shipments of troops that were staged at Camp Myles Standish in Taunton.

At the height of World War II, more than 50,000 people worked at the supply base around the clock repairing and overhauling American and Allied ships. This area of Boston, far from the city and right on the harbor, must have been rocking.

Activity declined after the war. From 1942 until 1970 the South Boston Army Base was primarily used as a terminal for military ships transporting personnel and equipment to destinations in Europe. 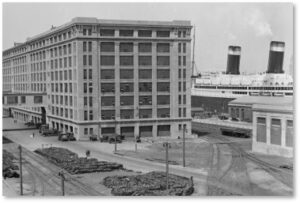 In 1939, the USMS North Star departed from the South Boston Army Base as part of the 1939-1941 United States Antarctic Service Expedition. Rear Admiral Richard E. Byrd commanded the expedition and used the North Star as his flagship. On board the North Star when she departed was the unique Antarctic Snow Cruiser which completed a 1,000-mile journey from Chicago to Boston under its own power.

From 1965 until 1982, the South Boston Army Base was the location of the Armed Forces Entrance and Examination Station (AFEES) serving eastern Massachusetts and Rhode Island. It was the site of anti-draft protests during the Vietnam War.

After the war, activity declined and many buildings and structures on the base fell into disrepair. The base was closed in 1974 and became part of the Boston Marine Industrial Park.

The Innovation and Design Building 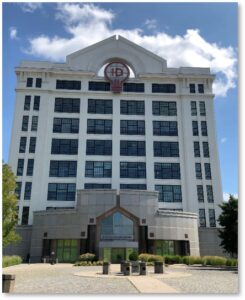 The re-designed west end of the IDB

Some of the hustle and bustle of the WWII years returned to the Supply Base in 1986 when the City of Boston purchased it from the U.S. Department of Defense and renovated the building.

Jamestown L.P., a real estate investment and management company, purchased the property in 2013 and spent $150 million on renovations. The bulk of the that money, about $42 million, was used to upgrade around 1,000 windows and renovate the building’s façade. The Army Corps of Engineers builds well, but they don’t build fancy.

In 2020 Related Companies bought a 50 percent stake in the Innovation & Design Building and the two companies formed a new joint venture to operate the massive property going forward,

Still Rocking After All These Years

At its western end the IDB complex is anchored by the Boston Design Center, New England’s premier resource for design professionals, with showrooms featuring more than 1,200 luxury furnishing and decorating product lines. The area around the Innovation and Design building is still rocking, only now it’s in a completely different way.

A raised and covered promenade running along the IDB’s north side provide access to the building as well as to the retail stores, restaurants and coffee shops at ground level. A variety of chairs and tables provide for comfortable alfresco dining on the waterfront. In the summer, food vendors in half-size shipping containers offer take-out dining options.

I sometimes wonder what the lunch-pail-carrying defense workers of WWII would have made of $10 sandwiches and $3 slices of cake. Worse, I can only imagine their opinions of Yankee Lobster’s $30.99 lobster rolls. Spending a week’s wages (or more) on a single lunch would have been the purview of millionaires, not Rosie the Riveter.

The Promenade looking east toward the sea and west into Boston

NOTE: The above photos were taken on Labor Day when the building was closed.

If today’s prices exceed your budget, you can still bring your own lunch and enjoy a quiet, shady place to eat with sea breezes to keep you company. You can’t get to the IDB Building on Track 61 anymore, though. That railway is filled in, although the tracks still run right up to the Promenade.

(This is another example of shortsighted transportation efforts in the Seaport. Imagine a little sightseeing trolley, running along those tracks. But I digress.)

Directions to the IDB

You may not be able to see the Innovation Design Building from the city but you can get there in a number of ways. 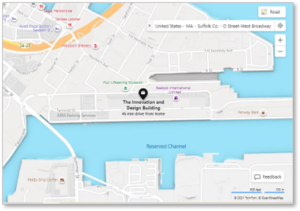 For its workers and tenants, the IDB operates shuttle buses from South and North Stations. If driving, you can put your car in a nearby parking garage. Or you can take the Silver Line. Buses stop at the far east end of the building.

Because the IDB is on the waterfront, you can also take a water taxi, which stops in the Reserved Channel just south of the Black Falcon Terminal. Watch out for cruise ships. (Well, when they start cruising again

Take a boat ride, have lunch by the sea, do some shopping in the 350,000 square feet of showrooms, and make a day of it.