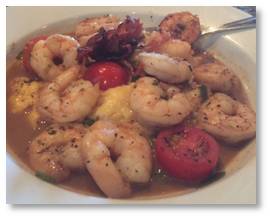 Shrimp and Grits at The Shrimp Factory

On our weekend trip to Savannah I entered the land of Paula Deen with full knowledge that eating the local food might raise my cholesterol into the danger zone. Well, maybe not after four days but I certainly did feel larger when we left than I had upon arrival. To keep things under control, I tried to eat as much seafood as possible, which is easy when every menu features oysters and shrimp. A few things surprised me about how Savannah eats and I got adventurous one night.

Shrimp: Eating in Georgia means eating shrimp and it was wonderful everywhere we went. I ate shrimp in a salad, in an omelet, grilled, sautéed, and broiled on a skewer. I even ate shrimp three times in one day—at every meal. It was always tender, juicy and sweet, unlike the frozen lumps we often get up here in New England that look fine but taste like chlorine. Just look at those gorgeous plump morsels of sweetness. 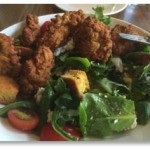 Oysters: Fried oysters on top of a salad. Yum! Why did I have to ask for this at Rocks on the Roof in the Bohemian Hotel Savannah Riverfront?  Why wasn’t it on the menu already? Add it, please.

Grits: OK, I freely admit that I don’t understand the appeal of grits. They are offered at many meals during the day but particularly for breakfast where grits are Southern home fries. I had shrimp and grits for dinner at The Shrimp Factory before we set out on the ghost tour. This was not the first time I’d eaten this porridge made from small broken-up bits of corn but previously I had it in Virginia and I thought maybe they prepared it differently in Georgia. But no: grits is grits.

I love corn in almost any form but grits don’t really taste like corn. They don’t really taste like anything at all unless you add copious amounts of butter and/or cheese. I would prepare them with herbs and spices to pump up the flavor while reducing the fat content. (I wonder what grits would taste like in an Indian restaurant.) Mostly, I just passed on the grits. Food has to be worth the calories, after all. But my husband got a salad that came with Parmesan grits croutons and they were pretty good.

She-crab Soup: This is a very rich and flavorful cross between a bisque and a chowder made from crab and cream. It’s supposed to include the crab roe to warrant the name but I did not encounter anything that looked like that at Belford’s of Savannah. Think New England clam chowder without the potatoes and onions but with crab instead of clams. She-crab soup tastes great but make an appointment with your cardiologist before ordering. 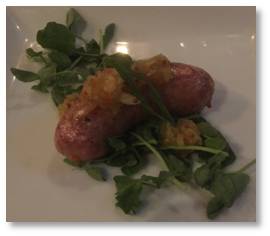 Alligator Boudin Blanc: Boudin is a French-Canadian sausage that comes in two varieties: noir et blanc. My parents liked the black sausage that’s made from pig’s blood and pork but none of us kids would even touch it.

The white version is typically made from pork and rice. In this case, however, the boudin was made from alligator and served at Alligator Soul, a fine-dining restaurant that specializes in adventurous eating. It was served with pea tendrils and I found it juicy, well prepared and flavorful. I’m not sure it’s a flavor I would go out of my way to eat again, though.

Elk Tenderloin: This was my entrée at Alligator Soul and it was incredible. I had eaten elk before in a meatloaf at a cafe in Springdale, Utah, but never all by itself. Here it was perfectly cooked and presented. The meat melted in my mouth and had a wonderful delicate flavor that was much more interesting than beef.

Biscuits: I love biscuits but they can be hard to find in New England where the restaurants typically offer toast, English muffins and bagels in the morning. But in the South you can get biscuits everywhere–and I did. I had biscuits almost every morning and they were great, whether at the hotel or in a cafe. No sausage gravy, though. That’s just too heavy, especially in the heat. 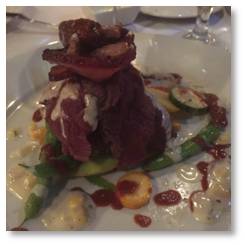 We did not eat at Paula Deen’s The Lady and Sons on West Congress Street, although we passed it many times. And we found most breakfasts to be pretty ordinary, even the one at Goose Feathers Cafe, a much-recommended spot. None of them could hold a candle to the Deluxe Town Diner in Watertown or the Deluxe Depot Diner in Framingham, MA.

We enjoyed the Southern cuisine in Savannah but now I’m doing penance — back on simple food, plain Cheerios, salad, fruit smoothees and other healthy options. And I’m exercising to work off  the extra calories. Got to get ready for our next culinary adventure.