This is the third in a series of posts on largely unknown spaces in Boston that are open to the public.

You could walk around the Boston Public Library’s two pink granite structures all day and never guess that nestled within lies a jewel of a courtyard. This beautiful hidden space offers visitors a secluded and tranquil place to read, relax, sip coffee and listen to music in the city’s Back Bay neighborhood. 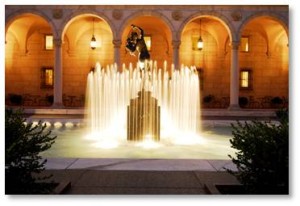 The fountain at night

The library’s original building on Dartmouth Street was actually the third incarnation of the @BPLBoston, which is the oldest, free, municipal circulating library in America.

The institution had outgrown its first two locations in downtown Boston before the Commonwealth granted it land in the Back Bay. It then moved west to the “new land” of the Back Bay. The building was designed by Charles Follen McKim of the New York firm of McKim, Mead & White.

Like most architects at that time, Mr. McKim turned to Europe for inspiration. Thus the new Boston Public Library was partly inspired by Labrouste’s Bibliothèque Sainte-Geneviève in Paris, and Alberti’s Tempio Malatestiano in Rimini, Italy. This classical revival structure, built from 1888 to 1895, heralded the American Renaissance in architecture of the late nineteenth century. It was conceived and created as a “palace for the people” with lavish marble interiors ornamented with sculpture and murals. At its heart is the courtyard. 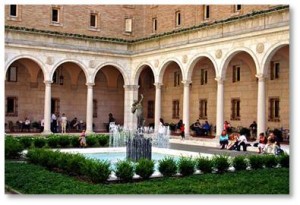 This beautiful central space was based on the design of the Palazzo della Cancelleria in Rome. It combines gardens surrounded by a cloistered walkway, a fountain, and a notorious statue.

The arcaded gallery that allows you to view the courtyard from three sides encloses a small plaza, within a perimeter hedge, that’s planted with grass and flowers. In the middle is a small plaza around a square fountain basin in which a circle of water jets plays around a granite plinth. Atop this is a statue of “Dancing Bacchante and Infant Faun” by Frederick William MacMonnies.

To be accurate, the BPL’s dancer is Bacchante III. The first version was given to the library in 1894 by Charles Follen McKim but it generated quite a furor. The Bacchante is a priest or priestess of Bacchus, the Greek god of wine, ritual madness, fertility, theatre and religious ecstasy. In keeping with Bacchus’s wild religious rites, the bacchante is nude, you see, and inebriated as well. To make things worse for Boston’s Brahmins and bluestockings she’s offering a bunch of grapes to the child in her arms. Nudity, dancing, and drinking, oh my! In addition, the sculptor used a 19-year-old mother and her child as models—a real naked woman instead of a classical reproduction!  Worst of all, she’s having fun. 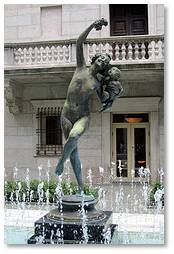 The statue created a scandal and the outcry against it was so loud that Mr. McKim withdrew his gift three years later and presented it instead to New York’s Metropolitan Museum of Art where it could be admired by the more appreciative and less judgmental residents of Gotham.

Bacchante II, cast from the same mold, is in the permanent collection of the Boston Museum of Arts, just down the road on Huntington Avenue. Nearly a hundred years after Mr. McKim’s original gift, tastes had changed sufficiently for the library to want its own version of MacMonnies’s delightful dancer and Bacchante III was cast from @MFABoston’s Bacchante II.

For all the furor, though, it’s hard to look at this statue without smiling. The Bacchante’s happy face and exuberant dance are so filled with joy that the emotion extends to the viewer.

More Information on the BPL Courtyard

The courtyard at the Boston Public Library is free to all. A series of open-air concerts is given there in June, July and August, offering a variety of music from jazz and folk to classical and contemporary. In addition, the BPL runs the Courtyard Restaurant serving lunch and afternoon tea. 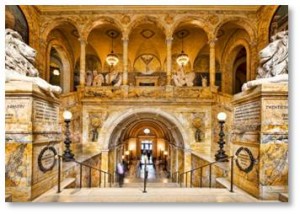 The main staircase looking down

It’s easy to find the BPL courtyard. Just walk in the main entrance on Dartmouth Street past the statues of Art and Science by Bela Pratt. Go through the monumental brass doors ornamented with bas relief sculptures by Daniel Chester French.

Walk to either side of the great central staircase and turn past it so you’re continuing west. You should see arrows directing you to the courtyard. Follow them through the doors and you’ll enter a small piece of Rome in Boston. Sit, rest, listen to the fountain and enjoy one of Boston’s hidden gems.

Previous Posts in the Series