I was reading yesterday’s litany of gun-related deaths on Facebook when I started wondering why America, more than any other country, has a gun culture that loves and accepts guns. If you don’t have links to organizations like Everytown for Gun Safety you probably will see only the local incidents on the news—or you may not see them at all. Here are six recent gun-related deaths that serve as examples of the wild, wild us:

So how did America come to be a country where gun ownership by individual civilians is accepted, approved, and admired? I thought about how most countries have gone through periods of violence as their civilizations were established. In Europe, Japan, and China, those violent upheavals occurred before guns had been created or were widely available. Their fighting was done with swords and knives. They managed to kill a lot of people with sharp blades and they do still admire them. It’s not difficult, for example, to find displays of katana and wakizashi swords in Japan, broadswords in England and claymores in Scotland. 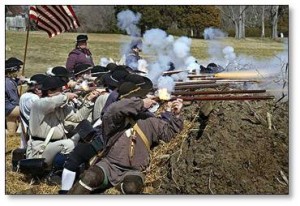 When America was established, however, it was with gunfire and we associate the founding our country with guns. From the French and Indian War through the Revolutionary War and the War of 1812, we fought with guns. Guns were essential tools as we settled the east and pushed west across the frontier. We used guns as tools to put food on the table, to protect our homes and land, and to kill deadly predators. We used them to shoot rattlesnakes, armadillos, coyotes, wolves, bears and mountain lions. The wild, wild west started on the east coast and survival often depended on having a gun and knowing how to use it well.

Lacking a standing army, we depended on volunteer soldiers, as defined in the Second Amendment:

“A well regulated Militia, being necessary to the security of a free State, the right of the people to keep and bear Arms, shall not be infringed.”

In the seventeenth century, those militias met and drilled every fall to keep their skills sharp. In many places in New England they still do. Historical re-enactors of the Companies of Minute and Militia muster in September with their powder horns and long rifles to drill and shoot. They march the Battle Road on April 19 to re-fight at Concord Bridge and on Lexington Green. 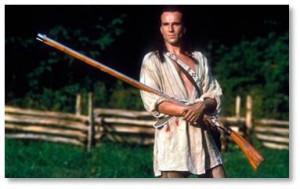 Daniel Day Lewis in The Last of the Mohicans

We used guns to fight the British and Mexican armies, a wide variety of Indian tribes, outlaws, and one another. We reveled in the feats of fictional woodsmen like Natty Bumppo—Le Longue Carabine—and real ones like Daniel Boone and Davy Crockett. We celebrated marksmen and women like Wild Bill Hickock, Calamity Jane and Annie Oakley. We even made national figures of sociopaths such as Billy the Kid and Jesse James, not to mention Bonnie and Clyde. Beyond that, however, guns also drove the passenger pigeon to extinction and almost did the same for bison.

Today it feels like guns to the right of us, guns to the left of us, guns in front of us and, increasingly, guns nearly everywhere. There have been mass shootings in movie theaters, on military bases, in elementary schools, high schools, at political rallies and on university campuses. We are becoming inured to these murderous rampages and, along the way, we have developed a national form of doublethink about guns. Here are three examples:

See what I mean? Does this make any sense to you? Are you at all concerned about the direction this is moving in?

Caught in the Crossfire

You might own guns, shoot guns, store them in a gun safe, support the right to keep and bear arms. Fair enough. But do you want to be standing nearby when (a) a gunman opens fire where you are shopping or watching a movie (b) concerned and well-armed citizens shoot back at him, (c) bullets are flying everywhere and your kids are caught in the crossfire?

This is not history or fiction, safely contained between the covers of a book or in a picture frame. This is not the movies, where gunfights are choreographed, bullet strikes are really squibs exploding, and the hero never gets hit. This is real life. We have no script, no choreography, no squibs, and the bullets are all live.

I’m worried about the wild, wild us because we seem to be growing wilder every day. How about you?