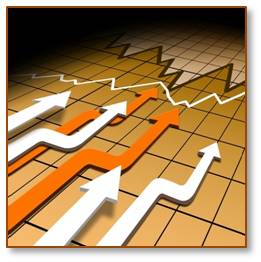 Just in time for the New Year we get the Grinch and the Goodies–a double-sided employment outlook.

Let’s see how the two reports compare and where to find the jobs that will last in 2017 and beyond. We’ll start with the bad news.

This list includes jobs that are declining or disappearing completely due to a variety of factors. Automation of one kind or another appears frequently as a cause. Electric companies now monitor usage remotely, for example, so meter readers no longer have to dodge the dog and skirt the shrub to get those numbers manually.

Pre-programmed playlists have replaced DJs at many weddings, bar mitzvahs,parties and other events but still have a place in the club scene, where they work to keep the energy levels high. And we have switched from mending clothes and moving hems up and down to simply tossing the garment away and buying another item made cheaply in Southeast Asian sweatshops. That makes less work for tailors and seamstresses, who are becoming a vanishing breed.

Check out CareerCast’s list of the 10 “Most endangered jobs for 2016” with the (negative) growth outlook and the median annual income for each. 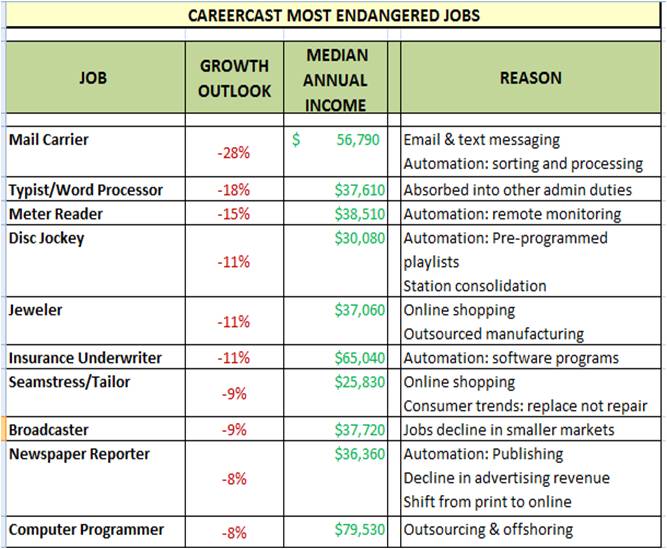 12 Best Jobs for the Future

On a more positive note, we read Mic.com’s “Best jobs for the future,” which they compiled using data taken from the Bureau of Labor Statistics. It offers us two pieces of good news: T

A primary reason for growth in these industries is that many of them cannot be automated or roboticized—at a least not yet. That’s because most of these positions reside in the health care industry in one way or another. Robots cannot yet perform such personal services and the jobs certainly can’t be offshored.

Take a look at this list, which includes the anticipated growth rate and the number of people in the country who hold such positions. 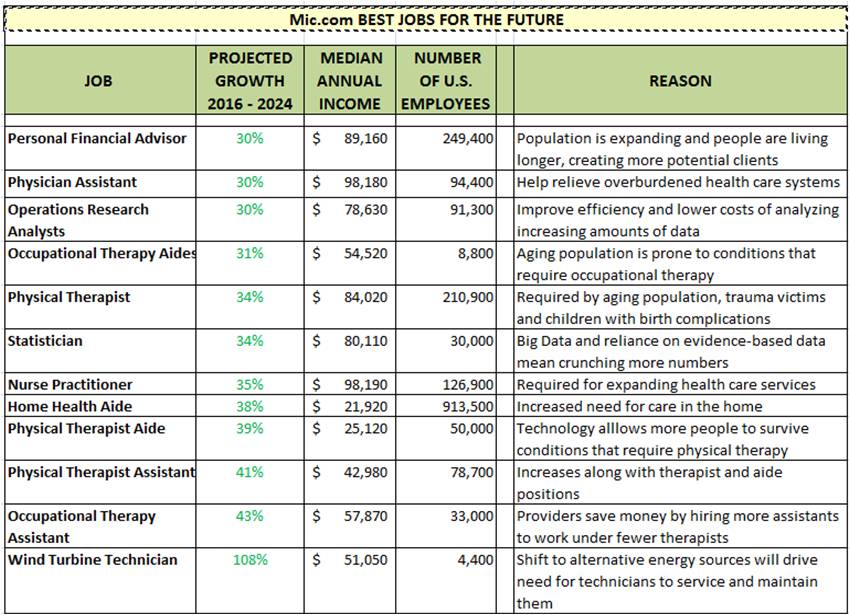 The one job I don’t see on either list is Robot Technician. I think that will be the biggest growth position of the future, along with robot programmer and robot designer. But that’s just my opinion.