We live with two cats and I have a problem with one of them. I’m hoping my readers can help me out with either suggestions or support. 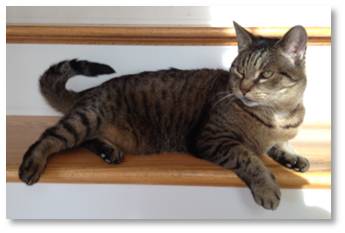 Teela on the stairs

When our son returned home for a temporary stay with us, he brought his two cats with him. The older cat, Sweet Clyde, was not well and the trip from Alaska pretty much did him in. We had to put him to sleep only a week or so after his arrival. The second cat, Teela, has remained with us. I hoped that she and our resident cat, Mystique, would learn to live together in tolerance, if not harmony. I hoped we could all just get along. But no.

Six months later, we are still listening to growling and caterwauling. We see hostile behavior—mostly by Mystique who finds her territory invaded—and sometimes we have to separate outright fights. The worst part is when everything is quiet and the silence is suddenly broken by a screaming fight. It’s enough to lift me a foot out of my chair.

Teela is arguably neurotic. After all this time in which no one has lifted a hand except to pat her, she still acts as if my husband and I are going to turn abruptly into Giant Cat-eating Monsters and gobble her up. She skitters around the house and looks like she’s prepared to hide from said GCMs at any given time. If I look at her, she scrabbles to get away. We are her worst nightmare. 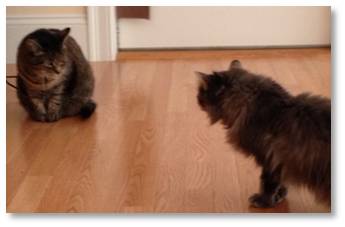 The daily face off

Being neurotic, Teela scratches things to make herself feel better. She ignores the catnip-infused scratching pad in favor of shredding the weatherstripping on the storage room door, the bottom of a curio cabinet, the dining room carpet and even the baseboard molding.

What kind of a cat lies on her stomach to scratch at baseboard molding? She has clawed holes in our screen doors and is probably etching long grooves in the glass storm door. She goes out for short periods of time but seems to prefer scratching inside.

She also pees on any clothing left on the floor and will poop in the upstairs bathroom unless we keep the door closed. (Teela has a clean litter box of her very own.) She will eat in a hurry, gobbling up the food in her bowl, and then barf on the hardwood floor.

One might excuse all this difficult behavior as the result of traumatic events in her eventful life:

So, OK, I get it. But that doesn’t make Teela easy to live with and I don’t like what she’s doing to our house. My alternatives seem to be (A) finding her another home, (B) taking her to the Buddy Dog shelter or (C) putting her to sleep. The last choice is out of the question. The first one is unlikely because she neurotic and has a snaggle tooth—not everyone’s idea of a beautiful cat. The shelter also has 20 resident cats looking for adoptive homes. 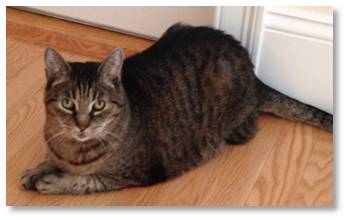 Teela is, however, not a bad cat. She’s very friendly. She likes to play and loves to get patted. She’s tolerant of children and grateful for a good home. She will sleep with you at night and curl up in a spot of sunshine during the day like any normal solar-powered cat.

Taking her to the shelter seems to be the easy explanation: and my son is OK with that. He’s tired of cleaning up after her and dealing with the feline hostilities. Buddy Dog is a no-kill shelter so I don’t have to worry about her being put down after a month or two. But I have this awful feeling that I’d be abandoning Teela in another new and terrifying environment. There is a word for that feeling: it’s called Guilt.

So that’s my feline dilemma. What should I do? All suggestions are gratefully accepted. Please put your ideas in the blog.