Among the people who voted for street names as a new series, one person chose Wigglesworth Street. I decided to start there. 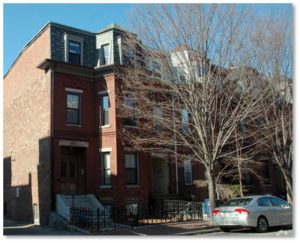 Like many odd or unusual street names, this road  is named for a member of a prominent Boston family. The problem lies in figuring out which member.

The Wigglesworh family name goes back to the founding of Boston and a lot of its sons and daughters have passed through the city since then. Many of the men had the same name: Edward was popular.

Where is Wigglesworth Street? 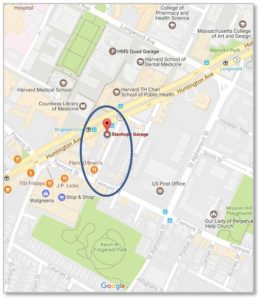 The street’s short length includes 19th-century bow-front and Second Empire brick row houses with mansard roofs and Panel Brick decorations. The doorways have enough architectural variety to make them interesting and owners have added their own ornaments. It makes for a visual haven from the institutional hubbub of Huntington Avenue/Route 9 traffic, the roar of the nearby E line, and the Stanhope Garage and parking lot that occupy half of the street’s north side.

But who were the Wigglesworths?

In chronological order the male line of the family includes:

You see the problem. Pinning down which Wigglesworth, or even which Edward Wigglesworth, presents difficulties. The houses on Wigglesworth Street were built between 1890 and 1900 so that offers no clarity. 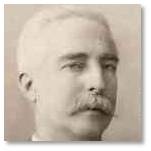 Most of the Wigglesworth men went to Harvard University and served as trustees of various educational institutions. They married prominent Boston ladies with names like Goddard, Parkman, Sewall, Pickering and Sparhawk.

One of the daughters of Edward Wigglesworth (b. 1804) and Henrietta May Goddard married J. Pierpont Morgan.

Proximity to the Harvard Medical School may indicate that the street was named after Dr. Edward Wigglesworth, the dermatologist. That’s my best guess. If anyone knows for sure, please comment. Dr. Wigglesworth is buried in Mt. Auburn Cemetery in Cambridge.

Wigglesworth Street is part of a Boston Landmark District and thus protected from “changes that would adversely affect its historic character.”