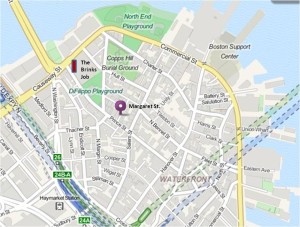 Recently, one of our Boston By Foot docents alerted us to a potential obstacle along the route of two tours: The North End: Gateway to Boston and The Dark Side of Boston.  Both tours sometimes need to be re-routed because of the frequent religious festivals, feasts, and processions—that are held in the North End during the summer. Twelve are scheduled for this year.

Now, however, our docents may encounter a different kind of crowd because a movie is being filmed there about Boston’s notorious mobster, Whitey Bulger. (I refuse to print a picture of this horrible man.)

Black Mass and Whitey B.

The Black Mass movie, starring Johnny Depp as James “Whitey” Bulger along with Guy Pearce as brother—and former State Senate President–Bill Bulger, is currently being filmed in Boston and Cambridge.  Here are some early pictures of Mr. Depp in costume as the older Whitey Bulger.  For this film, in which he depicts a cold-blooded killer, he will certainly have to ditch the quirky approach he has used for Capt. Jack Sparrow and Tonto and get serious. 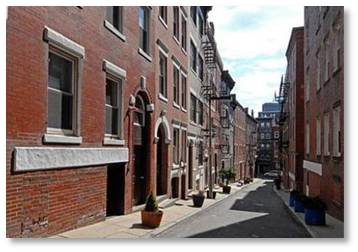 Margaret Street in the North End

While there is nothing glamorous, quirky, or exciting about the criminal on whom this movie is based, there’s no getting around the star-struck crowds that swarm a location shoot–literally.  They come to see the stars and watch their neighborhood turned into a movie set. Sometimes, they serve as extras in the scene.

The best thing to do when guiding a tour is to find a parallel street or other detour that skirts the people, trucks, and equipment associated with filming on location. The crew will begin work on Margaret Street on May 29 and, as it parallels tour routes on either Prince Street or Salem Street, we may be okay.  But there isn’t much room on most of the North End’s narrow streets for any of this, so obstacles could easily spill over.

The Brinks Job and Other Crooks

While Whitey Bulger’s turf was actually in Charlestown, the North End is no stranger to crooks, as I reported in yesterday’s post about Charles Ponzi. Margaret Street is also mere steps away from the building—now a parking garage—where the Brinks Job went down on January 17, 1950.  In just 20 minutes, the thieves, wearing full masks and chauffeur hats, took over $2.7 million in cash, checks and securities. It was the biggest cash haul in U.S. history at the time. Fortunately, no one was hurt during the heist and not a shot was fired.

It took six years and $29 million for the government to identify the gang members and bring them to justice. Eight of the 11 men who committed the crime were put on trial in 1956. (Two had already died and one had turned state’s evidence against the rest.) Although the eight pleaded innocent during the trial, they confessed 20 years later. Only $52,000–$58,000 of the Brink’s cash was ever recovered. 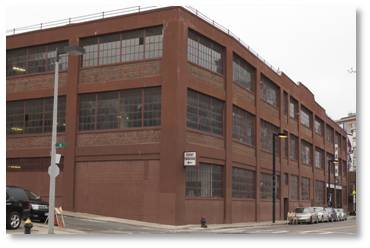 Hollywood loves a good heist movie and four were made about this spectacular crime, which was known as “the fabulous Brink’s robbery.” They were:

William Friedkin also filmed on Prince Street in the North End, among 56 different locations, and local residents found a way to earn a little extra money for themselves by making their apartments look historically accurate.  Come along on The Dark Side tour one night and you’ll find out exactly how they did it. @bostonbyfoot’s North End tours run throughout the summer and fall.

BTW: Black Mass also stars my friend, Actor Jeremiah Kissel, as Boston Police Commissioner Robert DiGrazia. @JeremiahKissel has also appeared in the TV series Body of Proof as well as movies The Fighter and The Town. Jerry and I worked together on multiple events for several different companies back when I was running marketing programs for high-tech companies.  He’s a great guy and a terrific actor. I look forward to seeing him on screen again.