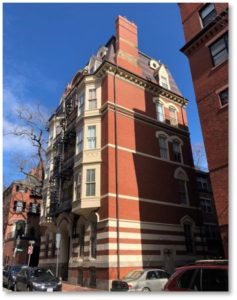 Walking around (and up and down) Boston’s Beacon Hill, one sees a lot of connected town houses in Federal Style and Greek Revival architecture. But on Spruce Street, you come upon a building of a different kind: not a house, not connected to any other structure and definitely not Federal Style in design.

Benedict Chambers, built in 1870 at Number 3 Spruce Street, stands out for two reasons. First, it was designed in the High Victorian Gothic Style by Boston architect Nathaniel J. Bradlee. Second, Mr. Bradlee designed it not as a home but as a fashionable residential hotel.

Back then, Benedict Chambers would have been called a boarding house. It had several notable residents, including author, poet, abolitionist, and suffragette Julia Ward Howe, who lived there for a short time. 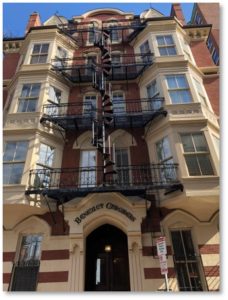 Benedict Chambers shows off these design elements: The square five-bay by four-bay building is constructed of red brick with brownstone, and granite trim. It rises four stories from a low granite basement to a steeply-pitched, two-story mansard roof.

Wide brownstone string courses define the first and second stories, making them look as striped as a dandy’s waistcoat. On the third story, two cornices bracket a course of angled brickwork. flanked by three-story wooden oriels. Striped roof slates in gray and terra-cotta color the top off the building. punctuated by bulls-eye windows.

Wonderfully ornate, wrought-iron fire balconies dominate the main façade with a spiral fire escape in the center. The name of the building, in ornate Gothic letters, arches over the steeply pedimented front door. 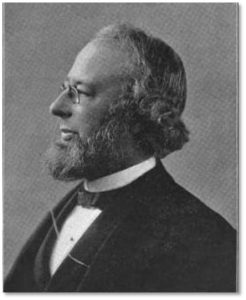 Best known for his work in bringing a municipal water supply to Boston, Nathaniel Bradlee also designed more than 500 Boston buildings many of which have fallen to the wrecker’s ball and the Great Fire of 1872. The list of his accomplishments includes several iconic structures:

From his office in Pemberton Square, Mr. Bradlee drew up the plans for whole blocks of townhomes in the South End and many downtown commercial structures.

Mr. Bradlee died a young man—only 59 years old–in 1888 when he suffered a fatal stroke while traveling to Keene, NH, on the Boston and Fitchburg Railroad. He is buried on Robin Path in Mount Auburn Cemetery, for which he designed the Gothic Bigelow Chapel and the Reception House.

Like many of Boston’s old residential buildings—and more than a few commercial ones—Benedict Chambers has been converted to condominiums. Today these units, which contain the original fireplaces and bay windows, sell for upwards of a million dollars. Because it stands as separate structure, Benedict Chambers allows in more sunlight that is typical for its townhouse neighbors on Beacon Hill. 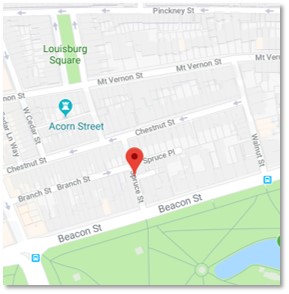 Spruce Street runs from Beacon Street on the south to Chestnut Street on the north—just one block. It is one of Beacon Hill’s tree streets. These hearken back to when Beacon Hill was a rural area occupied by one man, the Rev. William Blaxton. His plantings over several acres have been memorialized in:

You can see Benedict Chambers quite easily from Spruce Street and from walking down Spruce Court alongside it. Please respect its status as private property.