I love poking around in old churches. This probably comes from my Catholic, parochial-school background because I feel at home in churches but also because I love art and architecture. I like to follow my avocation in Europe because most American churches simply aren’t old enough or elaborate enough. With some exceptions, like Boston’s Trinity Church, you can wander through them without finding the kind of rich art to be discovered in Italy, France, or Austria. And you can’t find anything earlier than the 17th century.

The Art of European Churches 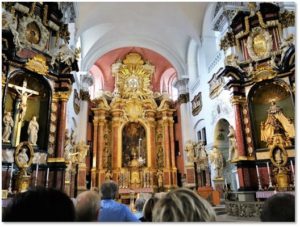 European churches bring together art, history, architecture, storytelling, mysteries and mysticism—and they go way, way back. Paintings, sculptures gilding, and stained-glass windows create a rich atmosphere overall. If you look in dusty corners and up into niches, you can find all sorts of things from centuries past.

Gothic churches hold fascinating sculptures–some of them quite irreverent–and vivid stained-glass windows. In a Baroque church or cathedral, these art forms cover almost every inch of space with bright colors, polished stone, and gilded wood.

What do I look for?

How to See The Churches

The two Viking River Cruises we have taken have given me wonderful blocks of time to spend in old churches, cathedrals and basilicas. (For an explanation of these terms, see this previous post.)

While other people go shopping or take a nap, I head to the nearest churches. When we finish a walking tour of a city, I find my way back to whatever church looked interesting and spend some time there. (My husband is Jewish and doesn’t’ share my interest.) Even the simplest village church offers a quiet place to sit, meditate and be in the moment.

In last year’s Grand European Tour with Viking, I saw so many churches in Hungary, Austria, Bavaria, and Germany, that I’m going to break this post up into two parts. Otherwise you’ll get a bad case of what our British friends call ABC: Another Bloody Church.

Nuremburg lured me with two Gothic churches. When our scheduled city tour ended, I wandered through St. Sebaldus, a medieval church with enormous stained-glass windows that citizens saved (mostly) from the bombs of World War II by storing them in underground beer vaults. It also houses the astonishing Schreyer-Landauer memorial created by Adam Kraft, a Medieval master stonecarver. (That’s him with the hammer and chisel.) 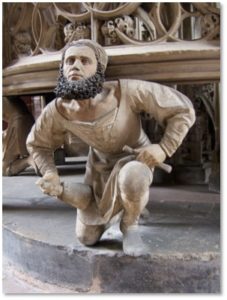 Adam Kraft holding up the tabernacle

Then a fast walk up the Konigstrasse took me to St. Lorenzkirche, a Gothic church that houses an even more amazing Adam Kraft sculpture The 61-foot-tall spire of the tabernacle rises on the backs of stone men, modeled by the sculptor on himself and his assistants. The images are so individual and so lifelike that you would recognize these men if you passed them in the street.

I walked up and down through that amazing sanctuary until it was time to pop into one of the shops to buy Christmas ornaments for our granddaughters (a little shopping is required) and meet up with the other passengers to return to the boat.

In Bamberg, I found time to zip into the Church of St. Martin. Viking Modi arrived early and our tour director—always on the ball—arranged for transportation into the city for anyone who wanted to shop. I had not packed enough warm-weather clothing (it was hot last June) so I jumped on the bus. After making a few purchases, I spotted the church.

St. Martin stands on the Grüner Markt, a shopping plaza lined with cafes, clothing shops and boutiques. That made for easy access. From the outside, it looks like a very nice church. The inside wows you with more Baroque over-the-topness: statues, frescoes, marble columns, and gilded everything. You almost don’t know where to look.

That’s the amazing thing about Baroque churches in Bavaria: they seem to be everywhere. A structure that would be a tourist attraction all by itself in America is just ABC there. I walked into St. Martin, looked around, and my jaw dropped at the scale of the building, the history behind it and the unbelievable ornamentation.

Who Was the Bamberg Rider? 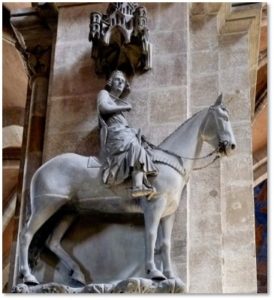 The scheduled afternoon tour took us to Bamberg Cathedral, the burial place of the Holy Roman Emperor and saint, Henry II, and his wife, Saint Cunigunde, the only imperial couple to be canonized. The crypt also contains the tomb of Clement II, the only Pope entombed north of the Alps.

Most famous, however, is the Bamberg Rider, a life-size equestrian figure who surveys the sanctuary from high up on one column. No one knows quite who he was and historians have speculated about his identity for decades. He had to have been someone important to rate a statue of this size and prominence. We had plenty of time to walk around the sanctuary and peer into the elaborate crypt before going out into the Bishop’s sunny rose garden.

When the Cathedral is Closed

Tomorrow I’ll talk about a few times when I just couldn’t get into the cathedral and some Interesting finds when I did. In the meantime, we’re discussing the destination for our next Viking River Cruise.