September will mark a year since Ray Rice decked his fiancée, now his wife, in a hotel elevator and he will be able to apply to the NFL to remove his suspension. He hasn’t made the headlines again in that time (although I don’t read football news) and presumably has been living on the $25 million the Baltimore Ravens had already paid him on his contract before they released him. 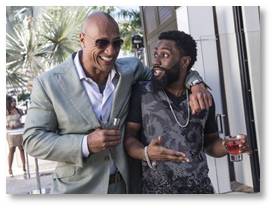 In the meantime, HBO has rolled out a series called Ballers about the lives and afterlives of NFL players. It stars Dwayne Johnson (The Rock) as a former superstar player who is now selling financial management as well as counseling players on the business of football. This half-hour comedy gives us a window into the world of very large men with little to no business sense and perhaps a smidgen of personal discipline.

#BallersHBO is a worthy sequel to Entourage, another comedy about men who are rich and famous but immature and resistant to growing up. Ballers fascinates me for the same reason Entourage did—but not for the reasons I think these shows succeed. 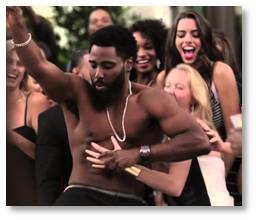 Partying down with the groupies

Most men will watch Ballers for a glimpse of the life they would like to lead: truckloads of money, beautiful women, astonishing houses, Lamborghinis and Ferraris galore, boats the size of city blocks, booze, drugs, and more gorgeous women. What’s not to like?

The only things that appeal to me out of this mix are the houses and the cars because they’re eye candy and over the top. Like Entourage, the show itself is over the top because that’s how you create dramatic tension and interesting plots. Having made it big time, they think the money will just keep rolling in. They will never be injured, concussed into a vegetative state, or suffer the consequences of their ill-advised action. As I said in a previous post about Ray Rice:

“No, the NFL isn’t made up of choirboys and yes, American football is by its nature a violent sport. The men who play it are paid very well, idolized, cosseted, sheltered from the real world by fame and money. (I wouldn’t be surprised if the NFL had a Ray Donovan or two on the payroll to clean up after them. Pro football players get away with a lot because the good ol’ boys in the NFL and the teams’ front offices protect their assets.”

Watching It Roll Out

Knowing it is one thing, though, and watching it roll out is another. So here’s what I think about when I watch Ballers, aside from the vicarious thrill of having more money that you can possibly need:

Poor Spencer Strasmore tries to make them understand that injuries happen and bad behavior or poor judgment can have devastating consequences but the boys just don’t want to hear it. They’re riding high and nothing bad is ever going to happen to them.

So do real-life ballers engage in this kind of behavior? Well, there’s Ray Rice to start. He at least has a chance at redemption in the fall. Then we have Brandon Spikes. This spring, the Patriots Linebacker was doing 90 MPH on a Massachusetts highway when he rear-ended an SUV carrying a couple and their autistic child. He fled the scene, abandoning his Mercedes Maybach on the center strip. The Maybach, top of the Mercedes line, goes for around half a million dollars. The @Patriots released him. He’s still on the free agent market as a middle linebacker and could land with another team but his value has dropped. 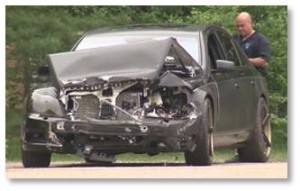 Brandon Spikes’s Maybach after the crash

The Patriots were perhaps sensitized by the Aaron Hernandeze case. Mr. Hernandez was big news up here this year during his trial. He was convicted of the murder of his friend, Odin Lloyd. and is currently serving a life sentence without possibility of parole. There will be no more big paydays for Mr. Hernandez.

Some people get to walk away from their mistakes while others don’t. Boys will be boys and some take longer to grow up than others. In the meantime, I tune in to @BallersHBO and get a kick out of watching just how badly they do it.