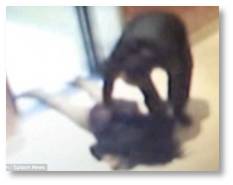 Janay Palmer unconscious on the floor

By now, everyone who follows sports news knows that the Baltimore Ravens have released Ray Rice, their star running back, for punching his fiancée and knocking her into an elevator wall, after which she dropped, unconscious, to the floor. Sports commentators, news anchors, pundits and experts have all weighed in with their opinions of both the incident and the feeble response to it by both Ravens management and NFL Commissioner Roger Goodell.

To tap into your own visceral response, however, you have to watch the video  as recorded by the camera inside the elevator. Several things astonished me as I watched it. (Anyone who thinks domestic violence is no big deal should watch this video.)

The unspoken message one receives in watching the video is that Ms. Palmer is less a human being in distress than a problem to be managed — and possibly evaded. The unspoken question is not “Are you all right?” but “What the  #@^%%* do I do now?”

When the incident was first made public, we only saw video from the hall camera, which picked up Mr. Rice carrying Ms. Palmer out of the elevator. Kudos to TMZ Sports for finding and publishing the elevator cam video, which eliminated any wiggle room for the Ravens and Commissioner Goodell by showing exactly what happened. Since then, the Ravens have released Mr. Rice and he has been suspended by the @NFL. He gets to keep the $25 million that he had already received out of his contract with the Ravens, so he won’t have to worry about paying the mortgage. 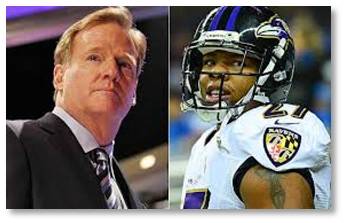 Janay Rice (she is now his wife) this morning issued a statement on Instagram standing by her man. She also apologized for what she called her part in the abuse. By comparison, Mr. Rice apologized to many people in his statement — but his wife was not among them.

I take no sides in their relationship issues. If she chooses to stick with him, as so many other brutalized wives and girlfriends have done, that is her business.  I also hope that the coaching and therapy Mr. Rice is taking will make a big difference in their relationship.

It’s been a long time since the late Myra Kraft urged the New England Patriots to release Christian Peter, a defensive tackle whom they had recruited despite sexual assault charges and convictions. When then-coach Bill Parcells defended the pick by saying that the NFL isn’t made up of choirboys, she responded that she didn’t want “thugs and hoodlums” on the team.

She made a difference for the better then but @Patriots didn’t hold on to the high ground. They later went through Corey Dillon (assaulting his wife) and Willie Andrews (drawing a gun on his girlfriend) before they got to Aaron Hernandez, who is currently awaiting trial on charges of murdering his friend. 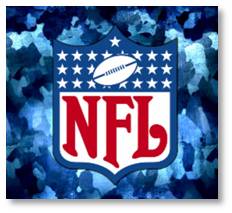 No, the NFL isn’t made up of choirboys and yes, American football is by its nature a violent sport. The men who play it are paid very well, idolized, cosseted, sheltered from the real world by fame and money. (I wouldn’t be surprised if the NFL had a Ray Donovan or two on the payroll to clean up after them. Pro football players get away with a lot because the good ol’ boys in the NFL and the teams’ front offices protect their assets.

Is the Game On?

The question is how much of this kind of behavior the American public is willing to tolerate. Many have asked this question but the only answer seems to be, “Is the game on yet?” In his press conference, Mr. Rice refused to call himself a failure because, “failure isn’t getting knocked down, it’s not getting back up.” That’s an image I would have urged him not to use, especially with Janay sitting by his side in the the role of The Good Wife.

He has at least a year to get back up before he can apply to the NFL to remove the suspension. I hope in that time he learns to treat his wife better both in public and in private. In the meantime, we wait for the next public assault by an NFL player.  Because whether it happens sooner or later, we all know it will happen again. First we’ll ask how this kind of abuse can keep happening.  Then we’ll ask, “Is the game on yet?”

1 thought on “Ray Rice on Failure”